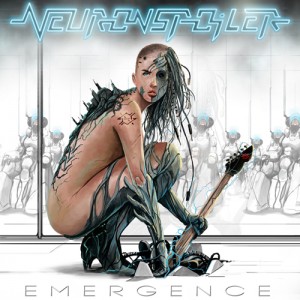 With members hailing from all over the globe, the talents within this London-based band are infinitely greater than those found within Monument…and although on the surface Neuronspoiler plow a similar old school musical furrow, their broader range of their influences allows the song writing to stand much stronger.  Perhaps, just as importantly, in Dave Shirman (replacing Stanley Dragon who played on the band’s previous EP), del Cid now has a musical running mate whose ability with a shredding riff and enjoyment of a twin lead is near equal to his own.  For the bulk of ‘Emergence’, Neuronspoiler are a band that plays classic metal with all the great eighties hallmarks…and for those aged forty and over, it represents metal as you’ve always loved it.

Naturally, given del Cid’s past track record, there are still moments when the Maiden influence shines brightly, making comparisons unavoidable – as with the main opening riff of ‘Never Back Down’ which mixes rhythmic stops and twin leads in a way that strongly recalls that band’s ‘Piece of Mind’/‘Powerslave’ era.  Rather than dwelling on these obvious influences in the way Monument undoubtedly would, Neuronspoiler are keener to mix up their influences.  During the remainder of ‘Never Back Down’, the mood is replaced with a chunky, slower riff, joined in turn by a powerful vocal.  JR’s voice is big – near theatrical at times; while his bottom end delivery can be an acquired taste, his higher registers are chock-full of eighties metal screams and the power in his voice seemingly comes across with no struggle at all.  The guitars, the voice and huge drum style would provide solid foundations for this celebration of old school metal, but this number’s strongest moment comes via bassist Erick Tekilla, filling an instrumental break with some fierce lead work, effortlessly showing off his tapping skills.

The rest of the album brings equally enjoyable metallic bombast almost throughout, with most tracks of a standard high enough to make it very hard to pick true standouts.  Particularly good,  ‘Through Hell We March’ mixes melodic vocals, with twin lead guitars and all-round harmonious backing, with a riff crossing old fashioned metal with a slight European power metal influence in a couple of places.  While it’s the kind of tune which could have graced many great releases from the past and has a very tried and tested quality, any familiarity never detracts from the quality of the playing.  Tim Barclay lays down a solid rhythm throughout, over which Tekilla indulges in some forthright bass work, rattling his strings with intent, while both guitarists both turn in top-notch performances.  Bringing more melody to the fore, ‘Exempt From Privege’ pushes the vocals further back to focus more upon the riffs.  Atop some great staccato work, both del Cid and Shirman sound relaxed in their delivery of twin harmonies and shredding leads.

The instrumental interlude ‘Act of Defiance’ also highlights some great interplay between the two guitarists without resorting to any Adrian Smith/Dave Murray inspired sounds; the band’s playing has a definite edge, something bolstered by increased use of bass drum pedal.  The beginnings of an interesting musical idea are found here – and as the lead guitar blooms into a full-shred, you’ll be left feeling short-changed, wishing this had been developed further.  The staccato riffs found within ‘Irreverant’ recall the heaviest moments from Judas Priest’s 1984 masterpiece ‘Defenders of the Faith’ and while a few of the melodies within the number’s verse feel as if they’re about to launch into some Maiden love, the band manage to resist.  Opting instead for shouting gang vocals evoking a battle cry for its chorus, this sounds like it’s designed deliberately to fire up the audience in a live set, while elsewhere there’s an  excellent contrast between eighties metal sounds and the edgier end of melodic rock for the instrumental break – all played once again with some first rate lead guitar work.  Perhaps the weakest element of this number comes at the end with the emergence of some obviously Steve Harris styled bass rattling.  Like some of the previous Monument recordings, such obvious influence comes well executed…but this album is at its best when those influences are less obvious.

‘Emergence’ is not all full-throttle thrills, however.  For the truly excellent ‘Dying Worlds’ – certainly this album’s most sophisticated offering – Neuronspoiler hint at a more progressive style on a tune which borrows elements from ‘Rage For Order’-era Queensryche.  At just over seven minutes, with a little more room to breathe and cleaner guitar tones weaving some very pleasing melodies, the best is pulled from JR’s vocal range too, as he delivers what is arguably his best performance. For the track’s second half, it also showcases some of the best playing from Shirman and del Cid, too – at first playing their beloved twin harmonies over a slightly off-kilter progressive metal rhythm, before indulging in a flurry of leads bringing the best from longer, more epic sounding notes.

‘Emergence’ is an album which proves that while rock fashions may change, there’s still plenty of room for classic eighties sounds.  Proving that various decades-old influences can be recycled without sounding tired or just too second-hand, this disc should be heard by all fans of traditional hard rock and metal.