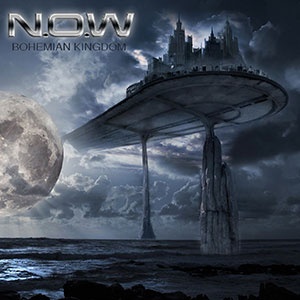 Three years on, N.O.W.’s sophomore album ‘Bohemian Kingdom’ picks up exactly where Mendonca and Bardowell left off…right down to it being another release which clearly needed far more money thrown at it.  However, looking beyond these recordings (again, no better than a professional demo), for the more undemanding listener, it offers some enjoyable slabs of melodic rock. None of the end results bring anything new for the seasoned genre fan, but then, those people wouldn’t want anything out of the ordinary anyway.

In a slight surprise, ‘I’m Alive’ begins with something not traditionally associated with melodic rock.  The very welcome strains of an electric piano brings a very old fashioned feel, one more of seventies pop and pomp than AOR.  Before long, though, those keys are pushed to the back of the arrangement and lead guitarist Juno Moraes begins the first of many guitar shredding moments throughout an attention-grabbing first track.  Naturally, this shifts the mood firmly into classic melodic rock, on an upbeat number which also allows Bardowell to push the higher registers of his vocal, delivering a performance slightly reminiscent of melodic rock legend Jeff Scott Soto.  With a slightly slower pace – driven by a confident and choppy riff- ‘I Feel Divine’ carries on the classic AOR mood; the more mid-pace allows the melodies to shine brighter, even though Moraes still insists on tackling his solo spot at full pelt.  With a wholly melodic riff and strong chorus, this represents the best N.O.W. have to offer.

Moving away from the bigger sounds, ‘Don’t Go Now’ shifts more towards radio-friendly pop/rock.  The main guitar rhythms are acoustic based, which when combined with electric leads, works very effectively.  As before, Bardowell pulls as much emotion from the big chorus as possible.   The song may be fairly memorable pop/rock, but unusually for N.O.W., it’s not the chorus hook which drives the number.  The most memorable elements – and ultimately the best performances – come courtesy of Moraes, whose bluesy guitar tones really lift the piece, especially during the second half where he is given the opportunity to deliver a fairly impressive solo.  Unfortunately, on the more negative side, the softer arrangement highlights the weakness in the production: Diogo’s drums are very thin sounding and may as well have been programmed, while the lead guitars seem a little too loud in comparison to the other instruments.  It doesn’t spoil this tune per se – or indeed any of the other numbers especially – but a fuller sound (and more money spent) would have benefitted the arrangement greatly.

During ‘Tonight Is The Night’, the focus shifts away from lead guitar work and gives the spotlight to a saxophone.  It could have been great in a Foreigner ‘Urgent’ kind of way, except the use of brass just isn’t hard enough. The sax is more of the lightweight easy listening style, but it’s still easy to see what N.O.W. were aiming for.  If only a cheesy saxophone was the only drawback with the title cut: here, a giant political clunker does its best to kill the middle of the album.  Marching drums, strings which sound like they’re played through a synth and samples of Hitler are among the main offenders, while Mendonca’s lyric regarding the Luftwaffe and SNOR causes unintentional embarrassment.  Probably well meaning, but the least said about this, the better.

‘Cassie’s Dream’ showcases some clean toned guitar work during its intro, at once evoking a dream like state as the title befits.  Although it hints at being ballad at first, by the end of the first verse, the whole band chime in, quickly shifting things back towards predictable AOR territory.  The mix of strong-ish chorus and harmony arrangements topped with a particularly showy solo will be enough to please many fans of the genre…over-familiar as it may be.  Closing the album, ‘No-One Can Feel It’s Over’ is a heartfelt ballad – including an outpouring of emotion that’s briefly hinted at elsewhere – where Bardowell croons over synth strings and soft and more bluesy guitars (where, for a change somebody actually understood that less can sometimes be more).  It’s not up there with Survivor’s ‘The Search Is Over’ or Journey’s ‘Faithfully’ – to give just two great examples of the classic AOR ballad – but everyone concerned puts in a good performance.  [Once again, the thinnest of drum sounds proves a slight drawback, but in many ways, since the drums do little more than mark time, perhaps that’s not so important.]

Overall – much like ‘Force of Nature – there’s nothing really original here, but it’s all well played and has many elements genre fans would associate with good melodic rock.  Given that at least half of these songs are genuinely decent, It’s such a pity they’ve passed off yet another demo quality recording as the finished article.