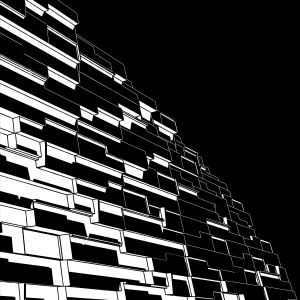 Supposedly, Aperiodic’s debut album resembles The Jesus Lizard twisted out of recognition.  Such a premise would be an interesting one, if somewhat unsettling.  Despite claims that their free-form jams aren’t completely directionless, what this band’s debut full length album actually delivers is approximately forty minutes worth of lo-fi, extreme free jazz rambling.  With bass only intermittently audible and no obvious lead parts except for the drums, it seems these guys’ main agenda is to try and alienate even the most patient of listeners – even those who feel they have an openness to the more extreme forms of alternative and avant-garde music.

‘The New West’ opens the album quietly.  At first, nothing happens. With near silence, the band creeps in with the band members clanking on their instruments in a free jazz style.  The drummer mixes uncontrolled drum rolls with clashing cymbals over which the guitars churn out a wall of feedback through the right channel.  In a similarly underwhelming way, ‘De-Realization’ ambles across almost eight minutes, spending most of them in a minimalist mood, with electronic spookiness and scratchy noises providing most of the sound collage.  During the last couple of minutes an almost rhythmic loud drum provides something resembling a climax.

Most of Aperiodic’s experiments follow in a similarly ad hoc fashion.  Both ‘Voided’ and ‘L’Ange Ex Terminateur’ are overly reliant on walls of feedback to create something approaching angst while the drums rattle in a fairly uncontrolled jazz fashion, seemingly whenever they fancy.  While this collection of musicians may feel they’re pushing the envelope with their lack of structures, after a while, the free-forming all begins to blur, and in doing so, almost has a predictable nature of its own ugly making.  It’s like listening to the most obtuse Zappa compositions but without any of the genius, or Ornette Colman at his most confrontational, albeit without any of the brass elements that made his extreme forms of jazz sound collage remotely interesting.

An out of tune piano and occasional rubber-band sounding bass notes hint at something slightly more thoughtful throughout ‘Amalia’s Regret’, but are eventually tempered by another overtly loud drum part before they’ve been given the opportunity to expand into anything potentially interesting. By the time the track ends, it’s been seldom any more than a another lengthy amble into ugliness.   The only time ‘Future Feedback’ offers anything accessible is during parts ‘La Pena Vevir’ where a distorted pulse lays down a beat.  This automatically gives the band more of a structure to work from (admittedly, it is a very loose structure, but it’s there), over which the drums wander into a jazzy workout.  A wall of distortion over the top combined with a sampled voice masks the jazzier elements somewhat, but essentially it’s an avant-garde jazz workout, like a slightly more extreme take on the live part of Mothers of Invention’s ‘Toads of the Short Forest’.

Even from an avant-garde perspective, this is a hard, hard record to like, at times even making Strapping Young Lad’s eleven minute sound collage ‘Info Dump’ appear preferable.  At best, bits of it might pass as a soundtrack to a deeply unsettling movie; at worst, the soundtrack for a student project involving interpretive dance.  It’s a record that is possibly only to be enjoyed by those who feel John Zorn’s score for ‘Funny Games’ is an everyday listen.

After this, it’s time to pull out Mr. Bungle’s ‘Disco Volante’ or Scott Walker’s ‘The Drift’ in an attempt to ease back into something more palatable.