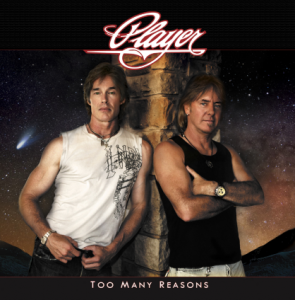 Those of a certain age should already be familiar with some of Player’s previous work, since the pop-rockers scored a huge US hit in 1978 with ‘Baby Come Back’, a track which even entered the UK chart peaking just inside the top 40. In their 70s heyday, the band toured with Heart, Boz Scaggs and even scored a place as support band for the slightly worse-for-wear Eric Clapton on his ‘Slowhand’ tour.

After Player called it a day in the early eighties, vocalist Peter Beckett concentrated on song writing (penning material for Heart, Grace Slick, Cliff Richard and others), while bassist Ronn Moss went into acting.  The pair regrouped under the Player name in the late nineties and released ‘Lost In Reality’, an album which failed to trouble the world at large.

Fifteen years on, Player returned with news of a brand new recording, along with a three track sampler for an album set for release in early 2013.  Sadly, that album is far from brilliant.  That’s not to say it’s awful either – there are a couple of recommended tracks among the fourteen on offer – but on the whole ‘Too Many Reasons’ is just so bland.

In an attempt at attention grabbing, the opening number ‘Man On Fire’ shows Player at their toughest.  A few choppy guitars – played in part by Beckett – pave the way for a tune which finds the vocal shifting between a light falsetto and a soft rock croon before settling in for a harmonious chorus.  There are two fairly big problems here: aside from the chorus, the rest of the song really isn’t especially tuneful, while the lower registers of Beckett’s voice sound like they have had better days.  He’s nowhere near ragged enough to go for whiskey-soaked an interesting, but at the same time, this is now a voice of a man who just doesn’t have the power to cut a big melodic rock vocal performance any more.  On the plus side, the lead guitar break brings a few classic musical motifs.  Following that, ‘Precious’ sounds as if it’ll be a good pop-rocker – embellished by a very eighties piano line – but then Beckett starts to sing.  In a hushed tone, he croaks and cracks in a delivery that only just rises above being a spoken word recital.  Adding further to the feeling of “why bother?”, this also appears to be subjected to a lot of studio tinkering.  It’s far too clean in terms of production, the treble end almost too clinical for words.  So, not only does Beckett have a very limited range, they’ve also decided to filter him…  Not a good sign.  Aside from the promising intro, the music isn’t much better; the drums are flat to the point of near-squishiness, while the guitars sound equally mushy in places.  Only that strikingly simple keyboard part brings anything uplifting.

A touch better, though still rather ordinary, ‘You’re My Addiction’ is a mid paced pop rocker, where the drums are so flat they may as well have been programmed.  Beckett and Moss’s vocals almost appear just as flat, thus drawing attention to the fact that while reasonable songwriters, this just sounds like a song writing demo they couldn’t actually find anyone else to record.  In a similar ploddy fashion – again with a drum track with the charm of a metronome – the title cut saunters along quite happily, a little too slow, but thankfully a few of the lead guitars give things a lift…but never quite enough to stop you from looking elsewhere for musical enjoyment after a couple of spins.

While possessing a good chorus and a lovely buoyant mood ‘Nothing Like You’ is quickly killed by a horrible, partly programmed arrangement that’s just too mechanical for words.  Since Player are so clearly aiming for the adult pop market, they should really have spent longer on their arrangements, and gone for a more organic sound, complete with a decent rhythm section [considering their bassist is one of the two “real” Player members featured, you’d think he’d want to make his presence felt a bit more…].   Looking past the mechanics, there’s a potentially enjoyable semi-acoustic song attempting to leave a lasting good impression…and ultimately failing.

Hands down, the best track is ‘To The Extreme’, another semi-acoustic number, this time recalling singer song writers Danny Tate, Billy Falcon et al.  An uplifting chorus really hammers home Peter Beckett’s abilities as a jobbing song writer – so much better than most of the limp material filling this record – while naturalistic harmonies and a generally sunny vibe carry the tune with ease. Even from the first listen, this tune comes with a very familiar air that should appeal to those who enjoy the lighter end of AOR.  Also saving face, ‘Sins of Yesterday’ is an excellent ballad, which is heightened by a very old-school arrangement. The keyboards are retro and sound almost as if they’ve been lifted from a eighties movie, while the guitars take a back seat right up until the moment where a slightly bluesy solo adds extra depth. With such a smooth backdrop, even the vocal hits the mark, as Beckett settles into something with a very soulful mood.  Bolstered by a group of equally soulful backing voices, Player delivers this old fashioned tune with ease.  It may be hopelessly schmaltzy and sound like AM radio filler from decades past, but this is so obviously Player’s strongest suit.  [Some listeners may wish to know that this is very similar to a lot of the material which filled most of Katey Sagal’s album ‘Well…’, which might be worth seeking out if you particularly enjoyed this track].

So, fifteen years or so after the previous Player album and almost a quarter-century on from their peak, it’s hard to understand why Player felt the need to (baby) come back at all.  There’s probably a decent EP here at the absolute most, but even then, those songs still sound as if they might’ve turned out better if Beckett had just stuck to writing and then doled them out to more deserving artists.  Although there will be people out there who welcome this release with open arms, ‘Too Many Reasons’ is a very patchy offering which not even a re-recorded version of ‘Baby Come Back’ saves from general insipidness.