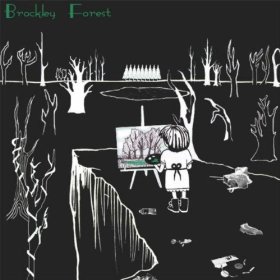 Realising the garage blues format’s potential limitations, with no faffing about, this Bristol-based duo ensure their sounds capture the listeners’ attention via some hefty beats and slide guitar work straight off.  ‘Out of Control’ begins with a grubby sound complimented by a kick-drum, giving a sense of where we’re headed for the next sixteen minutes.  Barely breaking from a simple beat for the tune’s first half, Seb evokes Meg White, before making his presence more strongly felt via a simple mix of snare and hi-hat.  Meanwhile, Dec  keeps things on the move with a charming fuzzed up Black Keys-eque vocal. ‘Say My Name’ rattles along at a quicker pace, thus managing to be superior, thanks in no small part to a cracking slide guitar riff.  This fuller arrangement – echoing moments from The Kills – shows the duo’s overall toughness as they rock out a little more, though never loses sight of their dirty blues roots.  Drenched in distortion, the slide guitar riff is a killer during this particular number.  Those looking for quick snapshot of the Brockley Forest sound should head straight for this track without delay.

Slowing things down a notch, ‘Gave It Away’ features Dec crooning over a dirgy guitar part; the slow blues bringing a doomier edge than the previous numbers.  The weighty tune is delivered in a suitably ugly style, the plodding pace allowing Dec more space to stretch his vocal, which again, is fuzzily treated for maximum impact.  Pulling the best elements from the first two tunes, ‘Love & Cream’ at once has a more commercial edge than some of the material here, although that’s due to a very Kills/Dead Weather inspired chorus as opposed to any hint of shininess.  On the flip side, a decision to place most of the vocal lines between some atmospheric stops shows more aggression than anything else featured here.  Their closing statement ‘Only One Survived’ weaves a bluesy minimalist tune around a distorted vocal, which uses repetition for maximum impact.  Coming across as a heady mix of The Kills and Spanish duo Idealipsticks, it would be great to hear the mighty Jack White put his stamp on this!

Brockley Forest make no attempt at reinventing the genre on this release, but attempting to somehow bring new and unfamiliar elements into such a pure form of music would be foolish.  When listening as a whole, these five songs may not always convey much of a change in mood (even within the confines of the genre), but individually, each one is rough diamond.  If you’re a Band of Skulls/Kills/Dead Weather devotee, there’s definitely something to keep you occupied here.