The first time I ever heard Beth Orton was in June 1995. The then largely unknown singer-songwriter had secured a support slot with Lemonheads head honcho Evan Dando at his one-off acoustic show at The Mean Fiddler, then in Harlesden, London.  As is the case with support acts, half the audience weren’t there to see Beth and, as I recall, many didn’t pay her much attention, but that night, I witnessed a very talented – if very nervous – musician.  I knew once her set had finished, I wanted to hear more, but as it turned out, I had a very long wait; ‘Trailer Park’ (her breakthrough album) wouldn’t be released for another year or so. The second time I saw Beth, she was playing on the huge stage at the Reading Festival in front of thousands of people.

After missing a couple of tours, I wasn’t sure whether I’d ever see Beth live again; a feeling which set in further when she retreated from live performance in 2006.  …And then, after a long silence, she reappeared with a new album (2012’s excellent ‘Sugaring Season’) and, even better, she announced she’d be playing live shows to promote it.

Initially, I hoped to catch her at London’s Union Chapel (a fine venue), but it wasn’t to be.  Instead, at the eleventh hour, I acquired a ticket for her intimate performance at St. Mary The Virgin, a church in Ashford.  For those who’ve never been to Ashford, it’s a non-descript town in the middle of Kent, with a particularly hideous one-way system, no real sense of history (unlike the nearby Canterbury) and the people are odd.  Still, no matter – once inside the venue, St. Mary could have been a church anywhere…albeit a very cold one, since their heating system wasn’t working (something which later became painfully apparent).

Certainly not the Union Chapel, St Mary has no old fixed pews – seating is positioned on the night, giving the tone of a school assembly or an ornate village hall, a feeling strengthened by the chosen MC – an unassuming old man who seemingly relished every second he spent at the mic.  Dressed in three shades of brown like a retired geography teacher, he announced in a gentle up and down tone that the support act would be on soon, then there would be an interval and then Beth Orton would be on later.  He had the presence of a man who seemed as if he would also announce that “Mrs. Bickerstaff has also donated a cake as a raffle prize…and she assures us it’s very nice.”

The evening’s support, Trevor Moss and Hannah Lou provided half an hour’s enjoyment with some pleasant folky tunes – much better than many support acts. His thin and wiry stature means Trev occasionally fidgets like a man who wished he’d had time for a wee before going on stage, but this in no way detracts from the obvious classiness of some of their songs, especially the lovely ‘A Proud Surrender’.  [Their albums are worth checking out if you can – official website]. 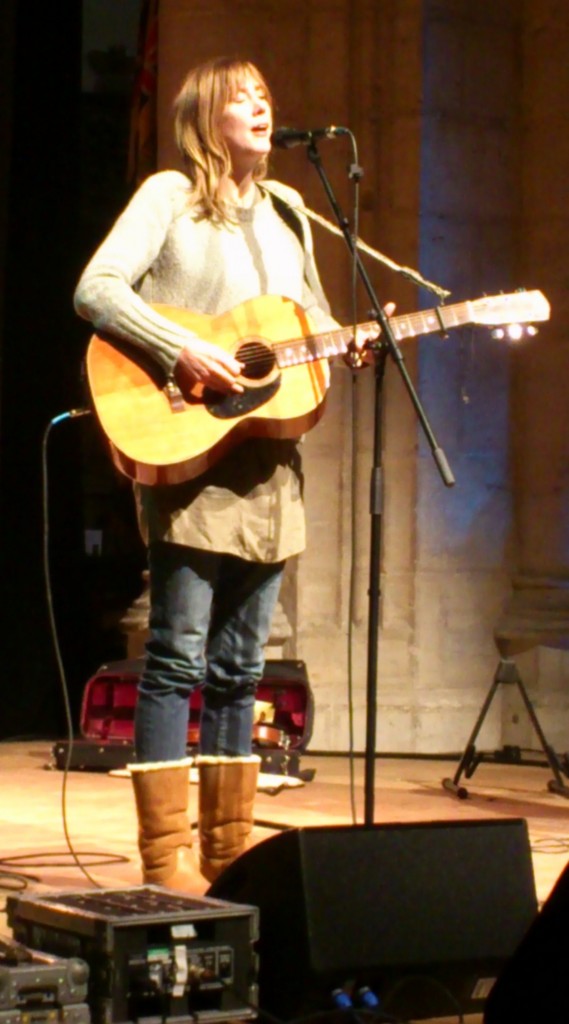 Appearing onstage shortly after, Beth Orton was greeted with enthusiasm, although a couple of songs in, it appeared she was not in the best of health, fighting what at first was a gentle cough, her voice cracking a tiny bit on the more forceful notes.  In the intimate setting, during the course of the evening, ‘She Cries Your Name’ and new song ‘Magpie’ both sounded superb and without a formal set-list, Orton took the opportunity to play whatever songs her mood, while occasionally turning to the audience for inspiration.  While most tunes were played on acoustic guitar, one tune (‘Last Leaves of Autumn’) was played on the Fender Rhodes, it’s sound nothing short of wonderful, as it echoed around the church.  Just as things seemed to be finding their stride, the performance was halted due to Beth’s cough taking hold.  After excusing herself and leaving the stage, the brown suited MC quickly took to the mic (frankly, bullets have left guns more slowly), and for the briefest of moments, I began to wonder if Ms Orton would be coming back.

Thankfully, she reappeared after a couple of minutes and from that point on, things got back to normal, or as normal as a gig in a church with people still wearing their winter coats and gloves was ever likely to get.  With the song on the Rhodes unfortunately abandoned, a decision is taken to concentrate more on older songs, bringing inspiring performances of ‘Central Reservation’ and ‘Pass In Time’, with Orton chatting with her audience in a jovial fashion, despite probably wishing she could just rest with a hot cuppa.  Perhaps the highlights of the hour plus performance were a new song ‘Mystery’ and an unexpected cover of Big Star’s ‘Thirteen’.  That particular Big Star number is a song so well-written it sounds like a masterpiece whoever sings it. This is especially true of Beth Orton’s performance, her love it/hate it vocal mumbling and crying through each word as if it were her own.

Briefly meeting Beth after the performance, I took the opportunity to tell her I first saw her that night with Evan Dando seventeen years ago.  “Yeah,” she says, “that was one of my first ever gigs”.  While an experience I had always treasured, that gig may have been one she hadn’t thought about in some time, given the places and audiences she’s played to over the intervening years.  As I reflect on how long ago it seems, she says – with a wry smile – “well, it was seventeen years ago, mate!”   And with so many great songs written since then – and this evening different again to the previous Beth Orton gigs I’d seen – her being back on the road is something to be celebrated. Those who’ve not had the pleasure of hearing her mix folky tunes with down-to-earth humour/unrehearsed banter should take time out to see her, even if just the once.