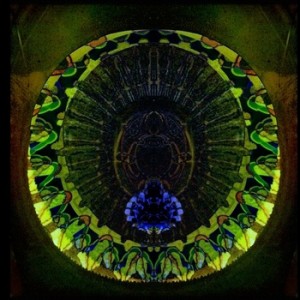 Having already released a self-titled EP at the end of 2010, Philadelphia’s Ruby The Hatchet began to create a small buzz via a few cult music blogs.  For those who sang the band’s praises previously, their first full length release will be welcomed with open arms.  For the many yet to be enthralled by this band’s music – which previously included Real Gone, having missed that EP entirely first time around – it’s time to sit up and take note, for ‘Ouroboros’ is awesome.  On this release, sounding like a cross between Fu Manchu and The Dead Weather, Ruby The Hatchet split their talents between heavy stoner rock numbers and spooky late 60s influenced psych, proving equally adept at both.

An instant hit, ‘Black Tongue’ rolls along with tuneful menace. The downtuned riffs takes a huge cue from Fu Manchu and Kyuss, delivering some of the finest bottom end grooves you’re likely to hear. The music may be overly familiar, but what sets this apart from many other bands ploughing a similar doom and groove-oriented furrow is Jillian Taylor’s vocal. Don’t be thinking that Taylor’s delivery is light and airy though; her voice – although often subjected to various reverb effects – comes with enough belt to hold up against the riffs, and a level of passion which really captivates the listener. ‘Wicked Ones’ features another great vocal – ending with a wail that makes Taylor sound like the dark cousin of Stevie Nicks – but of great importance is the number’s huge riff: not quite metal, far beyond its blues roots, it’s the kind of meaty monolith that powers lots of good quality stoner/retro rock.  If that’s your bag, you’ll certainly get a thrill listening to this.

More upbeat, ‘Strange Hold’ is this album’s most danceable number.  The drums may dictate more of a swagger and bounce, but the result has just as much power as the more ominous ‘Black Tongue’.   Each member of the band brings equal brilliance to this short piece: the rhythm section is tight, the guitars have the kind of distorted dominance that befits such a Sabbath-inspired outing and the lead vocal once again has an extra something… The contrast between the tone of Jillian’s vocal and the fuzziness of the riffs works as brilliant musical yin yang.  Beyond a solid drum line, ‘Good God Damn’ is a tad atonal, but that was surely the band’s intention.  On this Dead Weather-eque workout, dressed in a little reverb, the lead voice sounds very cool.  Beyond that, the number doesn’t break far beyond some oddly demanding drones until the inevitable climax, topped by a guitar solo that’s more about reverb than notes and flashiness.  Generally, the music serves to draw attention farther to the vocal and drum parts – both of which are strong enough to carry this particular piece.

There are equally enjoyable moments where the band deviate from Fu Manchu inspired grooves and kick into more psych rock/rhythm ‘n’ blues fare.  The second half of ‘Can’t Get Him Away’ is such an offering.  Adding farther enjoyment to its distinctive fuzzed out rock, it has a dual vocal where Taylor is joined by gritty tones from drummer Owen Stewart – the result of which sounds kind of like Blue Cheer tackling Ten Years After, before being heavied up for extra impact. Going for atmospheres over intensity, ‘Holy Father’ is the softest and slowest number on the album, but is perhaps guitarist John Scarperia’s finest moment, swapping distortion for an echoing lead delivering no shortage of bluesy licks. A limited lyric means that any vocal is almost just extra instrumentation, adding a little something extra to the very late 60s/early 70s vibe.  Even better, the jangly ‘Nowhere’ sounds at first like it’s going to break into a tune by Neil Young & Crazy Horse, before blossoming into a psych rocker that could be described as an atmospheric groover.  Beneath the ringing guitar tones, bassist Mike Parise finds plenty of space to include busy riffs.  It’s great to hear him branching out farther from the usual unwavering approach Ruby’s music usually demands.

Ruby The Hatchet may not be especially big on choruses (some songs don’t have any, others don’t always fulfil potential, settling for a few one-liners), but everything else seriously makes up for that.  When it comes to style, these tunes have plenty.  Listen…and you won’t be sorry you did.  Don’t just take Real Gone’s word for it – after all, no amount of flowery prose makes up for hearing something first hand and ‘Ouroboros’ is worth any amount of time you’d care to invest in it.  It’s 2012’s best heavy psych/stoner record, bar none.