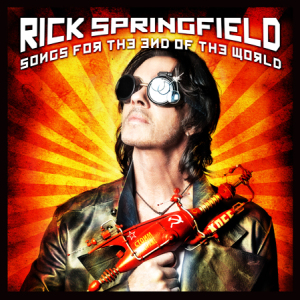 In 1980, Rick Springfield’s fifth album ‘Working Class Dog’ shifted the Australian singer away from the teen market and into the pop/AOR market, its lead single ‘Jessie’s Girl’ subsequently propelling him to stardom.  During the next few years, he released album’s of a similarly high calibre, ending his most high profile period with the classic ‘Rock of Life’ in 1988.  Springfield then disappeared from the music scene for almost a decade, eventually returning with the band Sahara Snow, whose one album may (or may not) have been compiled from unused material written for ‘Rock of Life’s abandoned follow-up.

Releasing albums sporadically – under his own name – from then on, Springfield’s work adopted a slightly harder sound at times, but essentially retained many of the kind of pop/rock hooks which proved a winning formula back in the eighties.   In that respect, 2012’s ‘Songs For The End of The World’ will provide the longtime fan with few surprises – but those only familiar with Springfield’s eighties work may be surprised at the relative chunkiness of a few of these tunes.

Each of the album’s core twelve songs are all superb.  A huge production sound plus some well-written pop/rock material proves a winning combination. Following some crisp sounding guitar chimes, Rick chooses to open ‘Our Ship’s Sinking’ with some huge and very welcome whoahs.  In contrast, the verse which follows, at first, sounds a little lower key than such whoahs may have suggested. The real clincher comes with the chorus: harmonies are abound on a rather catchy hook, where – guitar sound aside – everything follows the classic Springfield mould, so much so, this could have fit happily onto ‘Rock of Life’.  With a slightly new wavish edge – perhaps as a nod to ‘Jessie’s Girl’, though just as likely an extension of Springfield’s natural style – ‘I Hate Myself’ is punchy and poppy all at once, while a gang vocal choir hammer home a chorus which only needs to be heard once before making an impact.  Similarly Ready for radio, ‘Love Screws Me Up’ is nice an simple, a chiming guitar part paving the way for a shameless chorus of “na na nas” – if you like things cheesy (in a good way, obviously), this is a tune you’ll love. If you’ve followed Rick Springfield’s career thus far, you’ll know what you’re in for.  If you’ve never been swayed by the man’s prior work, well…you’re probably not actually reading this.  [As an aside, is there any chance of power pop man Kurt Baker recording a cover, please?]

More reflective, ‘Gabriel’ has a strong acoustic basis, but it’s not long before a ringing guitar boosts everything into bigger sounding melodic rock territory.  It’s all very much of a tried and tested musical formula, but that doesn’t weaken its overall impact.  In terms of writing unpretentious pop/rock fare, Mr. Springfield makes it sound so effortless…but then, at this point in his career, he’s had about four decades of practice.  The big power ballad ‘You & Me’ is loaded with rhythmic guitars and keyboards, shined up to the max without sounding unnatural.  While a slight filter has been applied, this tune boasts one of Springfield’s most distinctive vocals, instantly recognisable as the voice behind ‘Jessie’s Girl’, ‘Living In Oz’, ‘Alyson’ and many other eighties classics.  In terms of musical arrangement, there’s nothing new here, just old-school pop/rock with a strong AOR bent.  As with most of ‘Songs For The End of The World’, fans will not be disappointed.

With regard to the albums (slightly) rockier outings, ‘Wide Awake’ blends Springfield’s pop core with edgier elements perfectly, since the verses are incredibly angry by his usual standard, but the chorus ushers in studio-treated choirs of vocals which may as well be singing any number of his straight-up pop tunes from decades past.  My Last Heartbeat’ is a guitar-driven winner, featuring a chuggy riff which is balanced out by a techy multi-tracked vocal and a world of keyboard noises, while ‘Depravity’ is a fast paced offering where slightly muddy guitars power away, while cleaner leads provide a great compliment.  Of greatest interest on this number is the lead guitar break which, instead of taking the usual tuneful approach, fills a few bars with tortured squeals and a few technical effects.

This album has only one fault – and it has nothing to do with any of the material, but rather more to do with marketing and record company greed surrounding its release.  There has been four different versions of ‘Songs For The End of The World’ pressed, each with a different sleeve and content.  Three of the issues include bonus tracks: a UK/Euro CD (exclusive bonus track, ‘My DUI’), a CD available from Best Buy stores in the US (three exclusive bonus tracks, but ‘My DUI’ is absent) and a version sold via iTunes includes another bonus track that’s also exclusive.  For those keeping score, this means that in addition to the album’s twelve songs, there is another half a disc’s worth of songs floating around out there.  Adding further insult to injury, all versions come with downloadable content partly exclusive to each edition.  Whatever happened to music actually being a genuine art form as opposed to some kind of fan-fleecing business model? This kind of marketing rip-off must stop!  [See also the Daughtry debut: 9 bonus tracks spread across four editions…just ridiculous.]

Not wishing to let corporate greed sour what is a near faultless collection of tunes, ‘Songs For The End of The World’ is recommended listening to nearly everyone who enjoys chorus driven singalongs.  It absolutely stomps over any other similar(ish) radio-friendly pop/rock you care to name…and that’s no lie.  Releases this sharp and exciting from such “veteran” performers are rare and it deserves to put Springfield higher up the ladder in terms of public recognition. Since he was 63 at the time of making this recording, though, it might be a little late to make a pop idol “comeback”…