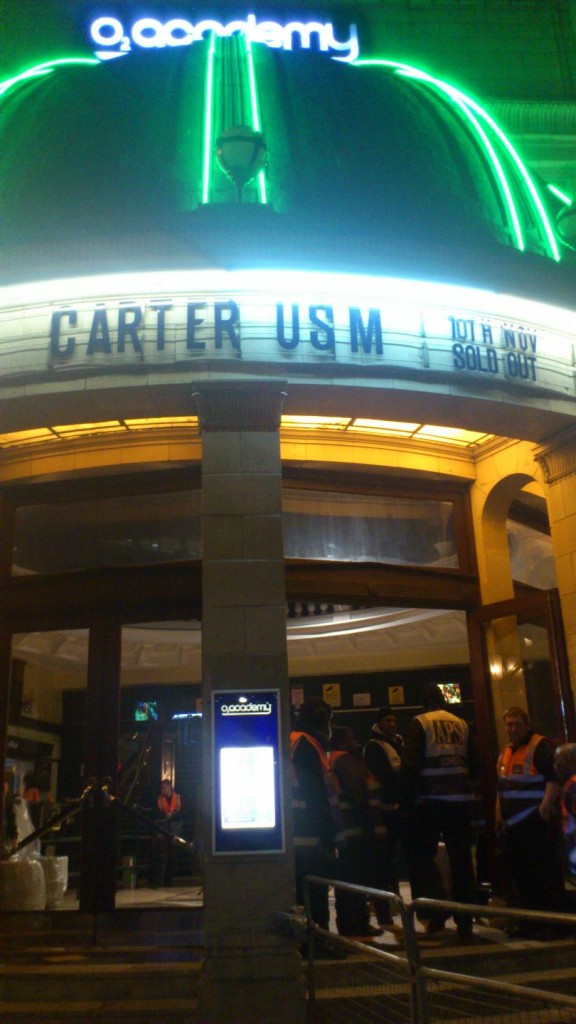 I saw Carter The Unstoppable Sex Machine live for the first time in the autumn of 1993.  It was on the ‘Post Historic Monsters Tour’ – the album had only just been released and the single ‘Lean On Me (I Won’t Fall Over)’ had cracked the top forty.  It was a special night – being my first ever gig – but aside from a handful of tunes (including the awesome ‘Say It With Flowers’), I couldn’t tell you what they played.  The adrenaline was pumping so hard, they could have played anything at all and I would have gone home smiling.  I have vivid memories of the end of the night, however, which involved my mate falling off a kerb, into the front of our car and throwing a kebab all over my lap and the passenger’s seat.  [With regard to that night’s Carter USM setlist, I’ve actually asked Jim Bob and Fruitbat what was included, and in the days of handwritten setlists and no internet archiving, they can’t remember either...]

Over the following two years, I saw the band another three times – including the short ‘Worry Bomb’ in-store launch gig in a Virgin Megastore, London on 6/2/95 – each time as good as the first, two of those with the brilliant Salad in support.  There were opportunities to catch them a couple more times before their breakup in 1997, but there were other gigs which got in the way – and truthfully, things were never quite the same during the band’s twilight years – especially once they’d signed to Cooking Vinyl, enlisted a bassist and keyboard player and become a “proper” band.

Following various individual projects, Jim Bob and Fruitbat reunited as Certer USM in 2007. Sporadic gigging ensued.  I missed a supposedly storming set at The Levellers’ curated Beautiful Days Festival in 2011 and two shows at Brixton Academy in 2010/11, so when Carter USM announced a return to Brixton for the end of 2012, I wasn’t going to miss them yet again…

On arrival at the venue, one of the security guards told me she had been working at Carter USM’s Brixton gig a year previously and it had been fantastic – one of the most fun gigs she’d ever worked through.  It was great to be hear enthusiasm from somebody unbiased – somebody without the rosy glow of nostalgia that often colours events such as this.  The fun didn’t kick in instantly however: first we had to endure Cud, a 90s indie band who remain largely forgotten.  Enjoyed by six or seven people bouncing at the front, their tunes barely rose beyond bog-standard indie sturm and drang, while bespectacled frontman Carl Puttnam wailed tunelessly while occasionally wiggling his tartan-clad arse in an embarrassing fashion.  It’s painfully obvious why Cud never really made the big time back in the day: they have a great bassist, but that’s it.  90s cult heroes Ned’s Atomic Dustbin were a very welcome addition to the bill and were enjoyed by many as they ploughed through 45 minutes of solid material – including hits ‘Kill Your Television’ and ‘Not Sleeping Around’ – so it wasn’t too long before the sour memories of Cud faded.

Watching the audience that filled the venue prior to Carter’s appearance, the older, fatter and largely male crowd seemed to be made up of blokes whose wives had let them off the lead for a night.  I’m also acutely aware of the passing years, noting that this particular occasion comes seventeen years since I last witnessed Jim Bob and Fruitbat play a full gig.  Once the duo appear on stage however, (to the usual barrage of “You fat bastard!” chants), it’s clear that the passing years have been kinder to these two musicians than it has to many of us.  Fruitbat looks about the same as he always did, while Jim Bob, rather perversely, has more hair than during Carter’s classic years – and more than lots of their audience ever will again.

The tunes are as vibrant as ever though, and at this show, the opening barrage of ‘Surfin’ USM’, ‘My Second To Last Will & Testament’, ‘Midnight On The Murder Mile’ and ‘Say It With Flowers’ is just about as intense as any show I’d previously seen them play…or perhaps any show they’ve played.  The two men look slightly lost on the largish stage at the Brixton Academy and there’s no visual to speak of for the most part, but it’s quickly clear that this show is more about interaction between band and audience than any flash musicianship or visual gimmickry. With nothing to prove, nothing new to promote and no record company breathing down their necks, Carter are left to concentrate on the evening’s main agenda: ensuring everyone has a great time.

Throughout the first forty five minutes there was barely time to breathe, let alone take stock of the setlist.  Having never seen it played in the Carter live set previously, the inclusion of Pet Shop Boys’ ‘Rent’ marked the beginning of a musical lull, followed as it was by ‘Falling On A Bruise’ (it’s moodiness certainly not well suited to mid set) and a slightly wobbly ‘While You Were Out’.   From then on – and pretty much throughout the last fifty minutes, both band and audience were on fire, tearing through other tunes from ’30 Something’ (three songs short of an entire outing tonight) alongside choice cuts from ‘1992’ and ‘101 Damnations’.  Perhaps the most unexpected were renditions of ‘Let’s Get Tattoos’ and ‘Glam Rock Cops’ – both from the beginning of Carter’s downhill slide – and a cover of Inspiral Carpets’ ‘This Is How It Feels’ (featuring a guest spot from Tom Hingley!).  Maybe the sagging mood midway was included on purpose, in order for the band and audience to re-charge themselves, but it would have been nice if the six minutes of ‘Falling On A Bruise’ were replaced with the sadly missed ‘Lenny & Terence’ and ‘Stuff The Jubilee (1977)’, but you can’t have everything.  It was a near perfect set after all.

Briefly, those intervening seventeen years since I last saw Carter USM could have been condensed into a much shorter time span.  Living in the moment, for those two hours in Carter USM’s presence, nostalgia never felt so good.  It would have been great if my mate who shared a couple of those past gigs had been there too to make the experience complete, but hey…at least I got home without smelling of doner meat.