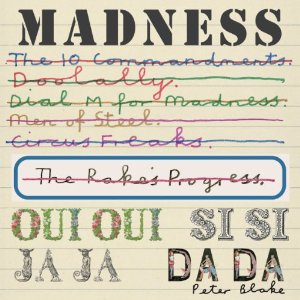 In the 80s, Madness put out a string of great albums. Moving effortlessly from ska based tunes to their own very distinct brand of bass and piano driven pop, they barely put a foot wrong in their formative years [comedy asian voices on 1982’s ‘Rise & Fall’, coupled with Mike Barson’s blacking up on that album’s sleeve being about the only wrongdoing prior to 1985].  Various reunions after 1992 have yielded reasonable pop music, with 2009’s ‘Liberty of Norton Folgate’ being the best of an average bunch, though little from the post-80s recordings resemble Madness at their best.

The band’s tenth album, the appallingly named ‘Oui Oui, Si Si, Ja Ja, Da Da’, continues Suggs and company’s ongoing spiral into mediocrity.  Nothing here is as embarrassing as the band’s 90’s woeful comeback hit ‘Lovestruck’, but – aside from two songs – very little here is actually inspiring.  At best, there are glimmers greatness manifesting in an unmistakable Barson tack piano (even if his playing lacks the fire of formative years) or a fine bassline (though Mark Bedford is notably absent; his place taken by session man Graham Bush).  For the most part, though, on this selection of “sophisticated” pop tunes, Madness sound like they’re going the motions with Graham “Suggs” MacPherson’s talk-based singing sounding incredibly half arsed on a good proportion of the material.

The album’s clear stand out ‘Death of a Rude Boy’ has a strong reggae base, it’s mid paced grooves and dark atmosphere tipping the hat to the Specials’ #1 hit ‘Ghost Town’ (something hammered home by a spooky harmonica sound).  While the chorus is a one liner, the band pull the best from it via some mildly sinister hamony vocals intercut by enjoyable tinkling from Barso’s tack-piano.  Also enjoyable, ‘How Can I Tell You’ features all the hallmarks of great Madness tunes past – upfront bass, good use of brass, a simple hook punctuating some faintly silly lyrics – delivered with relative enthusiasm.  It’s a tune which should connect with long-term fans while being quirky enough to attract the casual ‘greatest hits’ owner.

Beyond that, there’s nothing else genuinely exciting to be heard.  The jaunty sounding ‘Misery’ and the Smyth-penned ‘So Alive’ both utilise unashamed ska rhythms, but rather than having the ferocity of a 2-Tone recording, their near mid-pace is more of the traditional Blue Beat variety.  There’s nothing wrong with that particularly, but it only really makes these tunes a small step up from something from Suggs’s ‘Lone Ranger’ solo album.  Close your eyes and it’s not even that hard to imagine him contributing ‘So Alive’ to a Jools Holland & Friends album.  It’s lightweight and undemanding – and possibly enjoyable for some, yes – but classic Madness it ain’t.  When ‘So Alive’ is potentially one of the best tracks that ‘Oui Oui’ has to offer, that’s rather worrying.

Dipping into pop-ish territory, the Woodgate composition ‘Leon’ bristles along happily driven by a tack piano, unwavering bass line and a few more guitars than Madness ever employed previously.  It’s sunny vibe and reasonable chorus makes for a good enough pop tune, but even with these solid foundations, it doesn’t manage to ignite any genuine sparks.  The bouncy ‘Circus Freaks’ offers more sax than most of these tunes, but even then, Lee Thompson doesn’t contribute anything memorable; it’s Barson who (as is often the case on these songs) brings most to the table, whether it’s via a hard struck piano or carny-esque organ swirls.  As for the song itself, it’s easy to forget once it has ended.

The Northern Soul influence throughout ‘My Girl 2’ provides a strong musical base, but even that isn’t used to its full potential.  Over the top, Suggs trots out a bunch of lightweight lyrics with no staying power and even Barson offers a rare misfire – an ugly synth solo.  Thommo’s sax is possibly the only thing which stands out – and even that’s underused.  Still, even ‘MG2’ worst features fare better than anything on ‘La Luna’, a horrible mariachi inspired tune that’s mere muzak in comparison to its nearest equivalent – the lovely ‘Return of The Las Palmas 7’.

Strongly linking these largely uninteresting ditties  with their vibrant heyday, Madness drop in a few very familiar musical motifs from time to time, such as parts of ‘Embarrassment’ during the vocal and sax parts of ‘Never Knew Your Name’, ‘Kitchen Floor’s shameless ‘My Girl’ intro and definite ‘Mr Speaker’ tones from Barson during ‘Small World’.  In fairness, that’s probably to be expected from a band who actually have no striking new ideas left to give, but smug self-reference really doesn’t make any of these songs any better.

On ‘The Rise and Fall’ and ‘Keep Moving’ (released in 1982 and 1984 respectively) Madness proved that beyond the ska roots with which they were often labelled, they were a band capable of classy and distinctive pop arrangements.  Three decades down the line, it seems they don’t remember the magical formula they used in creating those albums.  ‘Death of a Rude Boy’ proves that Madness can still cut it when they try, but on most of ‘Oui Oui’, they just sound so bored.  On ‘Circus Freaks’, Suggs asks “why should anybody care?”, and sadly, when faced with such bland material, it feels like a painfully loaded question.  A once great band, sounding all but bereft of inspiration, only hardcore fans will find any real enjoyment in this…and even then, it’s possible to imagine they’ll lose interest pretty quickly.