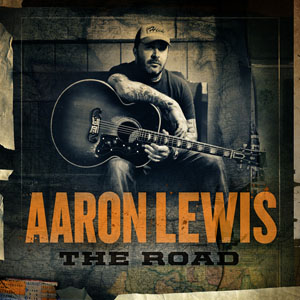 Aaron Lewis’s debut EP ‘Town Line’ saw the Staind frontman experimenting with a more country-based sound.  Having grown up with country music, he said the style felt natural to him.  The result was enjoyable, but not always wholly country in a purist sense – yes, there were rootsy leanings throughout and the songs were far more country than anything Staind would likely ever record, but a couple of the tunes still had a slight rock edge.  Still, it was country enough for him to gain a couple of award nominations from the Academy of Country Music.

A couple of years on, Lewis’s first full length release first capitalises on the promise of that EP and its first three tracks are pure gold.  Lead track ‘75’ begins with a very traditional sounding country guitar played with a deep twang, joined in the left channel by steel accompaniment.  …And then, with no messing around, Lewis offers some country staples – he’s “tired of missing the moments he won’t get back”, he’s tired of missing his loved ones, tired of motels.  It may be over familiar, but the well-worn tune and combined with an oft-told tale of road weariness seems to be an appropriate place to begin this record.  Its old-fashioned sentiments and tried-and-trusted arrangement (one which would suit almost any of Lewis’s forefathers) show a greater love and commitment to the genre than pretty much anything from his previous EP.  The easy groove and dobro which drives  the title cut is akin to southern groover JJ Cale at his most country influenced, while the more upbeat style allows for a few more lead guitar noodlings to provide musical interest, while Lewis himself offers a vocal with the confident style of a man who has been making country records for years.  In a slightly poppier style ‘Endless Summer’ is a feel good tune, full of harmonies.  By the time the chorus hits, it’s clear this was made for radio.  There’s a slightly more pointed guitar solo than on the previous two tracks, edging things slightly further toward country-rock territory; the general mood could (almost) be likened to one of Nickelback’s softer hits…only covered by a country star.  It may be the album’s most throwaway tune, but looking at the bigger picture, this opening trilogy of songs covers most of Lewis’s chosen musical moods in one triple-whammy.

From that point on, things don’t weaken.  The patriotic ‘Red, White & Blue’ features some pleasing hard twangin’ guitar counterbalanced by some syrupy steel guitar, and as such is classic new country, the kind that would suit Garth Brooks or any of his million-selling peers.  Perhaps part of the featured guitar solo is a little harder than on some country records, but it doesn’t intrude too much, or weaken the overall country vibes.  Vocally, Lewis may be slightly filtered, but the deep richness in his voice shines through.   ‘Lesson Learned’ is much more restrained, it’s pastel colours allowing Lewis to deliver one of his best performances.  Set against a dobro and steel guitars (with the dobro often rising to the fore), his commanding croon sounds terrific as he works his way through a thoughtful lyric, name-checking  Johnny Cash and advising us all to “slow down a little bit, take time, rewind, appreciate the little things that life provides”.  The closest ‘The Road’ gets to its predecessor is during ‘Forever’, where Lewis allows more grit to influence his vocal.  In turn, the drums are a little louder in places and some swirling organ fleshes out the loudest moments.  With a whole world of steel guitars thrown in, it’s still firmly country and is a great song for what it is, but those coming at this from a country fan’s perspective will certainly find a stronger affinity elsewhere.

Closing the disc, the ominously titled ‘Party In Hell’ is another woozy waltz.  Musically, it’s full of country music staples, with a dobro and particularly sharp lead guitar’s string-bent, hard twang punctuating each line with great effect.  With Lewis reflecting his place “washed up and burned out” while imagining a raucous gathering with Janis, Jimi, Rick James…and Jamey Johnson drinking from a brown paper bag, the mood may be a little more heavy handed, but the musical mood brings things full circle with the opening number ‘75’. This adds to the feeling that for musicians, it’s all about the road… and the road goes on forever.

On ‘The Road’, there’s even less musically – and thematically – connecting Lewis with his alt-rock day job than ever before, but in terms of where he is headed with his solo career, that can only be a good thing. Overall, this is a surprisingly good record, one which exceeds expectations.  With ten very strong numbers to be heard, it’s a release that those who like a little – or even a lot – of country music would be foolish not to make time for. Most importantly, for a man who hasn’t always been associated with the country scene, it’s far more country than about half of what’s often peddled in the name of the genre…