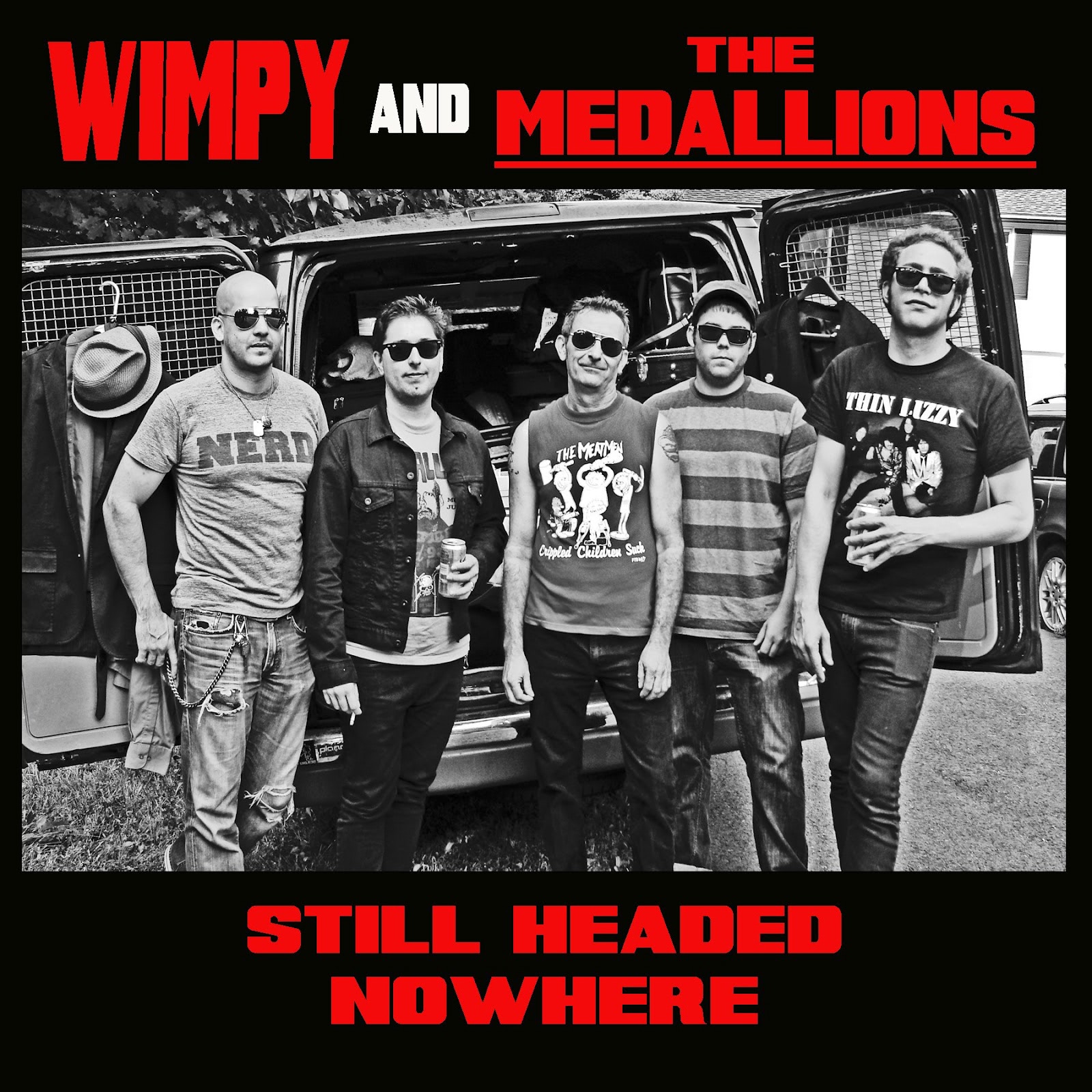 A stalwart of the US punk scene, Wimpy Rutherford was the original frontman for pop-punk legends The Queers, contributing vocals to their first couple of EPs.  As fun as those records are, a ridiculously low budget combined with Wimpy’s unrestrained growly vocal makes those releases (later reissued as part of the ‘A Day Late & A Dollar Short’ comp) only of real interest to Queers completists.   Although Wimpy left the band shortly after,  as the their career took off, The Queers always included a few of his songs in their live set.

Wimpy returned to the band a few more times later on – seemingly whenever he fancied doing so – guesting on a couple of 7”s in the mid-90s and contributing to their 2000 LP ‘Beyond The Valley…’ [An almost wholly objectionable work, its over-reliance on shock value material easily makes it the worst Queers album released during their first 30 years].  Following a stint fronting a new band, The Jabbers, in 2005 (yielding one album, ‘American Standard’), Wimpy returned briefly to The Queers yet again, performing vocals on ten songs on the ‘Weekend At Bernie’s’ live LP, issued in 2006.

Six years on, Wimpy appeared fronting his own eponymously named band.  The title of their debut EP ‘Still Headed Nowhere’ seemingly mocks the New Hampshire vocalist’s approach to his career and connection with anything long-term; since all four songs were written and recorded within 48 hours, even the approach to its creation suggests a “living for the moment” attitude.

In The Medallions, Rutherford has a strong line-up behind him.  As well as collaborating with the expected  – ex-Queers/Nobodys guitarist Geoff Useless – he is also backed by one of the best musicians of his on again-off again career: namely pop-punk/power pop singer-songwriter Kurt Baker, here stepping into the role of bassist.  Wimpy’s gravelly bark of a voice, meanwhile, remains an acquired taste, but it has nevertheless softened a little over the years.

Following a count in, the title cut comes full-on with a classic three chord pop-punk riff.  It finds the perfect balance between spiky punk and bouncy rock ‘n’ roll trash, the latter bought to life via a fifties inspired twang from Useless.   The old rock ‘n’ roll vibes get an extra kick through the presence of organ, complete with a rather fun solo (played by Kris “Fingers” Rodgers).  In terms of songwriting there’s a one-line chorus guaranteed to provide dumb enjoyment, which delivered by Wimpy’s unsubtle tones comes with maximum punk sneer.  If you make it to the end of this track, it comes guaranteed you’ll want to stick it out to the end of the EP.

’36 Weeks’ casts aside the band’s more obvious punk roots.  For the bulk of the song, a superbly fat bassline takes the lead, giving everything a cocky swagger.  Given the stripped down sound, Wimpy’s delivery sounds more menacing than ever and a gang backing vocal works excellently on another instantly lovable simplistic hook.  There are bursts of hi-octane punk trashiness, but these are tempered by equally energetic bursts of organ creating something which isn’t merely the work of “just another three chord punk band”.  Unfortunately, The Medallions’ second attempt at slowing things down (‘Draggin’ The Line’) fares less well…

‘Girl’s Gone Psycho’ has a garage rock vibe and each of the musicians does what comes most naturally to them: Rutherford sneers and barks, drummer Craig Sala lays down a solid garage rock backbeat and Baker’s bassline is occasionally more complex than you’d expect from such a tune.  Given the task of topping that off and effectively holding everything together, Useless takes a more tuneful approach, with two separate rhythm guitar parts, each of which can be heard clearly in the left and right channels.  While a little more commercial than the previous two tracks, with the perfect balance between punky delivery and tight(ish) musicianship and another instant hookline, ‘Girl’s Gone Psycho’ is a track which shows Wimpy and The Medallions at their absolute best.  In fact, it’s so good, it should have been used to close the EP, thus leaving the listener with something both upbeat and infectious.

Instead, The Medallions’ bow out with a number that is by far their worst.  On the aforementioned ‘Draggin’ The Line’, Baker’s bassline is another winner, but in terms of enjoyable qualities, that’s almost it.   Wimpy’s limited vocal range just doesn’t hit the mark and it’s not until the whole band join in (relative) harmony on the all-too-brief chorus this particular song offers anything enjoyable vocally.  Even then, while that chorus is fabulous, the brilliant gang harmonies don’t seem to be able to stretch any farther: during the closing moments, the singing is easily the most tuneless on the whole release, as the band tackles a la-la refrain while sounding really, really drunk!  If their brief bio is to be believed, then this is quite possibly the truth.

‘Still Headed Nowhere’ is a little rough and ready, though in comparison to those early Queers outings has a slightly broader sound.   The EP’s hurried creation means it was never really designed to be a classic, but it’s certainly very enjoyable.  Let’s face it, although flawed, the union of Mr Kurt Baker and some chaps from The Queers was never gonna be a bad thing…

[Listen, download/buy this release using the widgets below.]