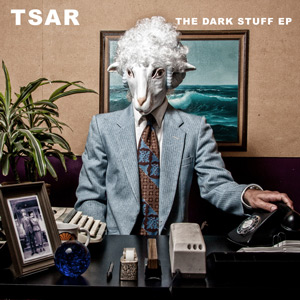 Back in the early 2000s, an acquaintance gave me a CD-R of tracks by undervalued power pop/melodic alt-rock bands he loved – bands he felt deserved more attention.  While the exact contents of the homemade disc are now just a fuzzy memory, it introduced me to Far Too Jones and Sugarbomb – two sadly missed bands who released a couple of superb records.  Also included was the Tsar track ‘Kathy Fong Is The Bomb’ – a stupidly, stupidly infectious tune that mixed power pop and glam, ultimately delivering an absolute suckerpunch of a chorus which, once heard, was never to be forgotten.

I quickly sought out a copy of Tsar’s self-titled debut on the sheer strength of that track, only to be bitterly disappointed.  Despite numerous attempts to get into it, none of that album’s tunes hit me in the way ‘Kathy Fong’ did.  In fact, I found nothing else to be particularly memorable and eventually, I gave up trying to like it.  Tsar, meanwhile, released a follow up record a couple of years later and recorded demos for a third in 2008, before taking a brief hiatus.

The band reformed in 2010, some ten years after ‘Kathy Fong’ first lodged itself inside the heads of a few unsuspecting power pop connoisseurs.  In 2012, they released ‘The Dark Stuff’, a five song EP of brand new material, celebrating their brand of glam rock chops and power pop hooks as if they’d never been away.  In honesty, it’s fair to say that if you liked Tsar before, then ‘The Dark Stuff’ will be a welcome addition to your power pop collection.  If they never clicked with you first time around, even though parts of this EP have a more mature sound, chances are, they still won’t.

There are a couple of occasions where Tsar sound great, as they do on the lead track ‘Police Station’.  A combination of twin guitar leads and trashy pop collides to create something brilliantly disposable, while a wordless chorus adds to its overall dumbness and a rock ‘n’ roll guitar solo appears in danger of going totally off the rails…  It’s a great track, evocative of the wondrous Redd Kross.  ‘White Lipstick’ is an upbeat fuzzy, glammy affair replete with distorted vocals, where again, Tsar bear more than a slight resemblance to Redd Kross – but frankly, if this were the work of that band, the McDonald brothers would have taken things up a notch and absolutely smashed their audience into oblivion.  For Tsar, despite best efforts, such attitude seems to come far less naturally.

Less instant, ‘Punctual Alcoholic’ blends downtuned acoustic guitars with a harmony driven – though not especially memorable – hook, which when pulled across almost five minutes just wanders into indifference, while ‘Little Women’ brings similar harmonies to a slightly reverbed tune that never quite kicks in.   A little better, ‘Something Bad Happened To Me’ is a decent pop-rocker with a late 70s/early 80s influence, loaded with a a radio friendly hook and a great – if a little raggedy – guitar break.  Although the music is well arranged, it’s on this track that the vocal limitations become more apparent; as before, Jeff Whalen has one of those nasal voices which, if not approached in the right frame of mind, can grate fairly quickly.

Overall, ‘The Dark Stuff’s weaker moments make Tsar sound more mature than they did before, and obviously, that’s a plus.  And even though those weaker songs don’t have the chops to stay in on the mp3 player for the long term, they’re far from objectionable.   As for its two killer cuts, despite going in with all guns blazing, they may just not be killer enough to make ‘The Dark Stuff’ a favourite.  While the Redd Kross influence that powers those numbers is very, very welcome, after a few spins you may find yourselves reaching for a Redd Kross record instead…  [and if you’ve not already done so, make sure you check out their comeback disc ‘Researching The Blues’ – it’s one of 2012’s finest releases].