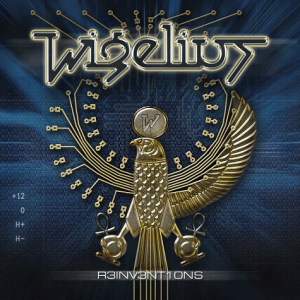 Maybe it’s just pure association, but some eponymous band names just seem to work well: Dio, Slaughter, Danzig and Dokken are all fine examples of this theory.  Others fall short of the mark: see Newman (sounds more like an estate agent), Naro and Shortino – band names chosen more out of vanity or, perhaps, a lack of imagination.

Frontiers Records signings Wigelius – named after two of their band members – are in danger of falling into the latter category, since the name doesn’t exactly roll off the tongue… Luckily, for this young Swedish band, their album ‘Reinventions’ is without a shadow of doubt one of the finest AOR/melodic rock discs to be released in 2012.  It’s twelve songs are delivered with abundant amounts of melodic power and classy musicianship (given a great studio sound by producer Daniel Flores) to create what is a “must-have” disc – even despite a slightly wobbly start.

While certainly expertly played – great guitar line, strong vocal, pompy keys –  opening track ‘Angeline’, is so close to ‘Emilie’ by fellow Swedes Work Of Art it’s almost scary.  While AOR stopped being about originality long ago, the similarities are such that it would be easy to dismiss Wigelius as mere copyists.  While some will love ‘Angeline’ (the band themselves have even chosen it as a lead track), it doesn’t quite reach full potential.  From then on, though, Wigelius really deliver the goods.

Bringing in a little more melody, finesse and a far less obvious point of inspiration, the album’s second number ‘Talking About Love’ is much better.  Beginning with dreamy 80s keyboard washes and a solid vocal, it immediately promises great things ahead…and then, as the rest of the band crash in with a classic AOR arrangement and a killer chorus, there’s no looking back.  A great chorus, full of superb harmonies and bell-like keyboard work makes this a near faultless track, especially considering the powerful lead voice and polished arrangement. It wouldn’t be an overstatement to even suggest this is almost an equal match for the kind of much-loved melodic rock that filled a decade of great discs between 1984-94.  ‘Next To Me’ and ‘Cassandra’ follow similarly tried and tested musical blueprints (with the former resembling Swedish melodic rockers H.E.A.T., only much better) but once again, through a mix of genuine talent and a fine producer at the helm, Wigelus come up trumps.  There’s little more to say, but if you’re someone who’s a sucker for a hook, these tracks should more than appeal.

Moving back into a more hard rock structure for ‘Do You Really Know’, Wigelius show no sign of weakness, as Jake Svensson’s staccato riffs lay down a solid foundation and his sweeping lead work comes with a great tone.  As far as fist-pumping melodic rock is concerned, genre buffs will have heard this kind of thing time and again, but this is a band who sound so truly enthused – streets ahead of the genre stalwarts offering another by-numbers affair from tired old bones.     On the acoustic number ‘Love Can Be That Much’, the simple melodies may feel a little like a Mr Big cast-off at times, but the song gives Anders a chance to shine vocally without the rest of the band competing for attention.  In the quieter setting, his slightly accented voice sounds very natural.

A barrage of great vocal harmonies sits at the heart of ‘Right Here Right Now’.  A main riff which could almost pass as the ‘Don’t Walk Away’ riff [AOR fans’ joke], is brought to life by an unwavering rhythm section, over which some of the lead guitar work is superb, particularly during an intro awash with showy tapping moments.   As with ‘Next To Me’, there are few musical surprises, but for those who’ve loved the classic AOR strains within Wigelius’ work thus far, this is potentially another favourite. The album’s most uptempo offering ‘Piece of the Action’ works through a world of rock clichés – musically and lyrically – and although it’s one of the weaker tracks, it somehow manages to sound sparky and wholly enjoyable.  The melodic hard rock riffs are solid, Anders Wigelius’s lead voice has plenty of power, but there’s no doubt the best moments come from a couple of unashamedly old-school lead guitar breaks.

No AOR album is complete without a big power ballad, and on ‘There Is No Me Without You’, Wigelius channel their inner Richard Marx, as a piano base allows Anders to belt out an emotive vocal.  As with most of the band’s other material, it’s when the rest of the band pull together that things really hit their stride, and here, a classy backing vocal and (relatively minimalist) soaring guitar lines give this track a great send-off.  While it’s of the by-numbers variety, it’s not any the worse for that.

Given the sheer amount of well-known talent that has passed through the Frontiers stables over the years – Journey, Foreigner, Jeff Scott Soto, Def Leppard, Whitesnake and so many others – Wigelius may not be considered a premier league band by many, and understandably so.  Fact is, however, ‘Reinventions’ is far, far stronger than most melodic rock discs being released by other bands who began their careers long after the scene’s heyday.  Much like Work Of Art and Brazilian band Auras (both also Frontiers signings) Wigelius are cast-iron proof that there are still classic records to be heard from a genre that’s often considered past its best.