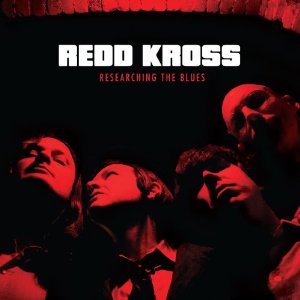 Over the course of their career, Los Angeles punk/power poppers Redd Kross (formerly Red Cross) have released some great records.  Although their early raw releases are loved by some, for most listeners, their finest works are not those punk/garage influenced records at all, but the handful of later releases heavily indebted to Cheap Trick. ‘Third Eye’ – the first and most accessible of that short run of albums – is a largely unheralded masterpiece.

The band’s 2012 album ‘Researching The Blues’ breaks a fifteen year hiatus for Redd Kross, but it’s not as if the McDonald bothers faded entirely from view during that time.  Jeff played in Ze Malibu Kids with The Go-Gos’ Charlotte Caffey, while Steven turned his hand to producing records for others, before resurfacing in 2009 as bassist for hardcore punks OFF!

When a band or artist returns after such a long time out, quite often the results can be a little disappointing.  Thankfully, that is far from the case with regard to this record, since ‘Researching The Blues’ is a classic Redd Kross release on all fronts.  Firstly, it features the line-up that recorded 1987’s ‘Neurotica’ – a somewhat pivotal release which saw Redd Kross making the transition from garage-based tunes to developing stronger pop sensibilities.  Secondly, and perhaps most importantly, it blends the best elements of their three 90s records [1990’s ‘Third Eye’, 1994’s ‘Phaseshifter’ and 1997’s ‘Show World’].

It may have been a long time coming, but Redd Kross have given their fans a selection of brilliant tunes here and the album’s overall sound picks up where the band left off, almost as if it was recorded without any hiatus at all.   The short and punchy ‘Meet Frankenstein’ puts the band in a Flamin’ Groovies mode, all sixties chords and jangle.  In classic style, that’s not quite enough for Redd Kross, who then decide to dress an already enjoyable romp with some smart Cheap Trick styled harmonies.  Keeping with a horror theme, the potentially tacky ‘Dracula’s Daughter’ is equally wondrous.  With a much slower pace, dominated with echoing drums (which, in turn, absolutely drenched in crashy cymbals), the McDonald brothers share their love for all things sixties sounding, a fusion of Big Star and Teenage Fanclub.    The more throwaway ‘One of the Good Ones’ provides a little fun via an almost danceable beat, clean rhythmic chord patterns, a bass part which has more going on than initially expected and a world of handclaps.  While slightly more bubblegum than most of ‘Researching The Blues’, doesn’t get anywhere close to the high camp of ‘Bubblegum Factory’ or their 1994 cover of ‘Yesterday Once More’ in the name of trashy fun, but it’s fun all the same.

The simplistic arrangement of ‘Winter Blues’ allows plenty of room for a multi-layered vocal, while beneath pounded drums, a great bassline pulls everything together.  Although not quite stretching to two and a half minutes, there’s also room for a brief twangy lead guitar break which tips the hat to some sixties greats.  Sounding like The Byrds dressed in glam-rock clothes, Redd Kross sound terrific during ‘Hazel Eyes’ which places their complex vocal arrangements against a brilliant jangling guitar line.  Just as you think you’ve heard it all, Steve breaks into a fat bass lead and Robert Hecker tops everything with some brief Pete Townshend-eque  bluster with brilliant results.   In a slightly angrier fashion, the title cut fuses choppy guitar with another pounding drum part.  The album’s most direct offering – perhaps more in keeping with material on the band’s 1994 release ‘Phaseshifter’ as opposed to anything more bubblegum – the guitars are fuzzy and a lead break appears suitably aggressive while throwing out melodies in favour of whammy-bar antics.

While the catchy choruses and harmonies come thick and fast throughout, best of all is ‘Stay Away From Downtown’, a high energy rocker which combines 60s riffs and harmonies with a rawer post-punk attitude.  It’s ringing guitar tones have a relentless approach, but the general mood of the number is absolutely joyous.  The simple chorus which barely extends beyond the one line but it’s so, so infectious.  A casually thrown in “Yeah you!” at the end of each chorus refrain is a throwback to the arrogant teen attitude which peppered their earliest discs, while the shameless “sha laa laa” which brings the track to a close echoes the sugary pop hooks of ‘Third Eye’s best outings.  In short: the harmonies, energy and attitude collide in a way that’s so distinctly Redd Kross that long standing fans will absolutely love this track after the very first listen.

With a running time of just over half an hour for ten songs, there’s no padding here. Like Van Halen’s first couple of records, Redd Kross exploit the theory of “quality, not quantity” and ‘Researching The Blues’ really benefits from such a lean and mean style.  It’s one of those albums which, once ended, you’ll find yourself listening to again…and again. If you loved ‘Third Eye’, this release should be high on your priority list.  If you’ve never heard Redd Kross before this release is a good a place as any to start listening.