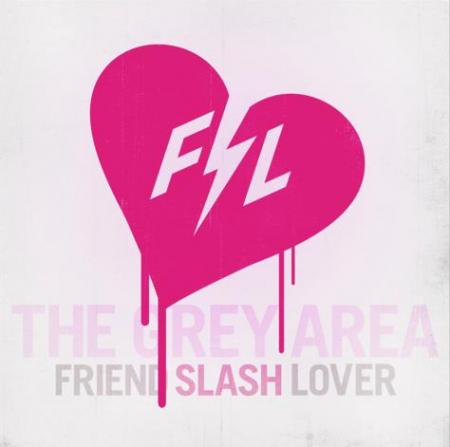 Friend Slash Lover began life as a project in the mind of singer-songwriter Josh Mintz (aka Stupid Human).  After settling on the new moniker, Mintz teamed up with bassist Frank Day, guitarist Greg Pajer and drummer Jake Hayden to create a final line up for the band.  A debut EP, ‘As American As Ones and Zeros’ was released in the summer of 2010, followed by live shows including appearances at the world famous Roxy (a regular haunt for Jane’s Addiction in their early days) and the Viper Room.

The band’s second EP, ‘The Grey Area’ comprises of six numbers which mix a solid pop/rock base with new wave keyboards and occasional harder rock riffs.  ‘As Seen On TV’ comes with a great guitar riff which gives off a very confident air.  Mintz’s slightly emo-ish vocal style is at odds with the heaviest parts of this opening tune, but the arrangement is so well crafted that the constant pull between the hard rock elements and the alt-pop edges keeps things interesting throughout.  The early eighties sounding keyboards lurking beneath add just enough depth to make the track sound far more complex than it actually is, while the guitar riff leaves a great lasting impression; so much so, the chorus doesn’t really grab the listener initially.  On the title cut, the tables are turned:  musically, things are much poppier, fusing radio-friendly rock chops with a chorus hook that’s absolutely superb.  After two or three spins, this tune sticks out as Friend Slash Lover’s best: the vocal delivery is very much suited to the overall sound with a strong mix of acoustic/electric guitars and tinkling keys.

Turning their attention to something softer, the dreamy pop/rock of ‘Unaware’ crosses adult-oriented singer-songwriter moods with some very new-wave keys and programmed drum sounds.  ‘Carry Your Weight’ explores similar lighter tones, but fares better through an extensive use of electric piano, an atmospheric guitar part and a huge sounding climax.  In fact, despite a slow-ish start, the second half of this number ranks among Friend Slash Lover’s best; there’s enough oomph to make the tune sound meaty – if never quite epic in the true sense – while retaining enough melody and accessibility to make it just right for radio.

Perhaps of greatest interest on this second release – and particularly for slightly older listeners – is Friend Slash Lover’s choice of cover tune.  They’ve chosen to tackle XTC’s somewhat controversial ‘Dear God’ (originally from XTC’s 1987 release ‘Skylarking’).  It’s not the first time this tune has been given a makeover; Sarah McLachlan put her own stamp on it back in the nineties. Unsurprisingly, Friend Slash Lover’s recording has more of a rock feel.  The use of electric piano during the intro is particularly lovely, as is the mechanical banjo-esque keyboard loop.  Multi-tracked vocals are also a nice touch here.  Initially, the hard beats of the marching drum seem a little jarring, but once the piece gathers momentum and the sound becomes much fuller, it’s easy to see why this particular stylistic choice was made.  The whole thing builds to a suitably angry finish, and while it doesn’t quite retain the sneer of the XTC original, it’s a decent cover overall.   As one of Britain’s greatest songwriters, the works of Andy Partridge really ought to be explored more often…

In summary:  There’s very little wrong with Friend Slash Lover’s chosen sound, but they don’t always do much that makes them stand out from the world of dozens and dozens of sounding bands out there.   As it is, though, any band which takes the time to cover XTC are deserving of a little of your time in return, while in terms of the self-written material, ‘The Grey Area’ is worth checking out for the title cut alone.