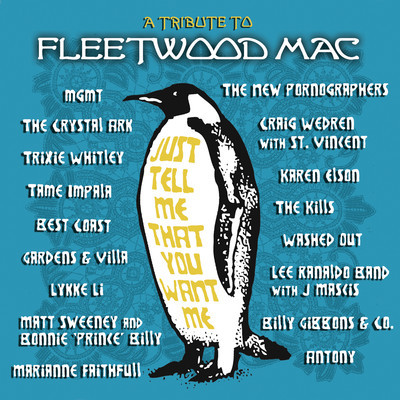 Fleetwood Mac need no introduction.  Alongside The Beatles, The Rolling Stones and Queen, they’re one of a few bands who have recorded at least one or two songs which everyone over the age of thirty will know – and probably know well.  It’s only too fitting they should have a tribute album.

2012’s ‘Just Tell Me That You Want Me’ is, in fact, the second Fleetwood Tribute album to feature other notable artists.  The first – 1998’s ‘Legacy’ was a reconstructed ‘Rumours’ including reasonably faithful recordings Elton John, Shawn Colvin, Jewel and Matchbox Twenty. Rather like the Holly Estate approved tribute to Buddy Holly released last year (‘Listen to Me’), it was enjoyable but nobody really came to the project with any imagination.

2012’s Fleetwood Mac tribute comes without a safety net.  Like the “other” Buddy Holly tribute released in 2011 (‘Rave On Buddy Holly’), ‘Just Tell Me That You Want Me’ rounds up a bunch of musicians and artists far more relevant to the period in which it was recorded, and then lets them loose on their chosen material.  As always with tribute discs, the results are a mixed bag.

Beginning our journey into Fleetwood Mac’s back-catalogue, Sonic Youth’s Lee Ranaldo and Dinosaur Jr’s J Mascis have chosen to start somewhere near the beginning by tackling one of the band’s first major hits.  Written as a “blues for children” (or somesuch), Peter Green’s ‘Albatross’  is subjected to a surprisingly gentle reworking by the pair; always totally recognisable, but with more reverb than ever before.  All slide guitar parts are respectful; occasionally Mascis’s Neil Young-esque tone rises to the fore, but never becomes intrusive – in fact, it serves as a nice reminder of whom it is playing here.  Given past form, it must have been tough for the pair not to be tempted to drown everything in blankets of distortion and feedback.  Another tune from the blues years, ‘Oh Well’ is given a slow, heavyish workout by ZZ Top mainman Billy Gibbons.  His guitar tone is superb throughout, as he takes on a very distinctive riff, all the while making it his own.  Vocally, his gravelly delivery is also quite fitting; in all, a good job.  It’s rather surprising, given the general pace of the original Peter Green riff, that Gibbons didn’t give it the old ZZ Top boogie treatment.  Maybe he figured that would be too obvious…

For years, I insisted that ‘Landslide’ was such a well-crafted and beautiful tune that it was impossible to hear a bad rendition.  Even the oft-maligned Smashing Pumpkins version has such a brilliant softness that the magic of the original recording still shines through.  After hearing Antony Hegarty wailing his way through the Stevie Nicks lyric with an absolute lack of charm, I’ll have to change my mind.  As the guitar riff begins to play, it’s instantly familiar (and as enjoyable as always), but then Hegarty opens his mouth and it turns nasty.  He wobbles and croons in falsetto as he attempts to feign emotion – and it’s not really necessary.  The tune is so fragile that a nice, more natural performance would do it justice far better.  In fact, I can’t think of much worse than this except, perhaps, Rufus Wainright whining his way through ‘Songbird’ – and luckily we’ve been spared such a potential travesty.  [In fact, all artists associated with this tribute have wisely chosen to leave Christine McVie’s ‘Songbird’ alone].

With a live sounding drum, solid bassline and something akin to a pub piano, the much lauded Best Coast’s version of ‘Rhiannon’ sounds like a tossed off demo.  Somehow it manages to be oddly charming, despite – or maybe due to – Bethany Cosentino’s slightly off-key voice.  You may not like the end result, but at least she’s taken it and made it her own.  Karen Elson offers a take on ‘Gold Dust Woman’, which is interesting, at least to begin with, as she places her slightly warbly voice over a pre-programmed loop and minimal instrumentation.  As the rest of the band chime in, though, things settle into something more ordinary, sounding not too far removed from a Steve Nicks demo, albeit with a little added reverb in places.  The predictable nature means this cover is okay, but seldom more than that.  Much better, The Kills take ‘Dreams’ and run it through the proverbial mangle.  Musically minimalist, the percussive moments are disjointed clanks, with the guitar parts clanging and often equally sparse.  John McVie’s solid, unwavering basslines are nowhere within earshot and all the while, Allison Mosshart delivers a vocal that’s – rather perversely – a close approximation of Nicks’s original and hugely familiar vocal melody.  It’s all kinds of scary and brilliant, but let’s just say, The Corrs it ain’t!

If there is one track here that’s really worth seeking this release out for, it’s The New Pornographers recording of ‘Think About Me’.  The Canadian collective already have some great recordings of their own in their impressive back catalogue, but it’s a real pleasure to hear them tackle something which has been familiar and enjoyed by so many for so long.  After an indifferent start – with too many synths – the tune quickly sounds like a ray of indie-rock sunshine.  Dropping the instrumentation for the first part of the chorus is a masterstroke as it shows that (despite the lead vocal being of an acquired taste), NP are great harmony singers.  Placing Neko Case’s distinctive tone so high in the mix also works in their favour – she sounds superb tackling the part that previously belonged to Lyndsey Buckingham.  The least said about the instrumental synth break, the better, but those harmony vocals make up for any other weaknesses.

For quieter, more reflective efforts, Lykke Li and Bonnie Prince Billy turn in reasonable versions of ‘Silver Springs’ and ‘Storms’ respectively.  Working alsongside ex-Zwan man Matt Sweeney, Billy’s higher registers sound very emotive on a somewhat sparse acoustic take of ‘Storms’ – one which will undoubtedly please his huge, cultish fan base.  The percussion-free arrangement allows the lyric to shine, as the twin acoustic guitars lay down a surprising basic tune.  Yes, it’s lovely.  Likke Li, meanwhile, takes the Mac’s 1977 B-side ‘Silver Springs’ and makes it a slightly haunting experience.  Already a great track (it’s exclusion from the original ‘Rumours’ was only due to running time constraints), this version sounds rather different, after being given another minimalist rework and subsequently having the lead voice and guitar swamped in echoing sounds.  It’s unlikely to replace the original recording in your affections if you’ve been a Fleetwood fan for any great length of time, but it good to hear it tackled with the kind of imagination a few of these covers appear to lack.

Closing the release is a pair of bands working from more of an electronica influence.  The Crystal Ark’s ‘Tusk’ dispenses with all tribal leanings and focuses more on bottom end synth sounds, eighties handclaps and reverb noise.  The dual vocal places a deep-ish male voice against a breathy female, which although not entirely like the original, works well enough.  As the track progresses, things slowly fall into place and it’s nowhere near as odd as it first appears – in fact, the main instrumental refrain sounds well suited to being hammered out on a cold sounding synth.  MGMT’s reimagining of ‘Future Games’ is nowhere near as good, as they drag the tune out to over ten minutes making it resemble a poorly played version of ‘Maggot Brain’ by Funkadelic.  They also replace all clean vocals with heavily processed, almost robotic voices. Huge kudos to them for choosing something from Fleetwood Mac’s most overlooked period, but frankly, it’s just horrible.

Given the array of artists on show here and her ability to cite Fleetwood Mac as a major influence, it is rather surprising that Florence Welch (and her omnipresent Machine) have not made a contribution.   Perhaps if Florence + The Machine had been included among somewhere among these seventeen offerings, ‘Just Tell Me…’ would have yet another highlight.  As it stands, it is unlikely that all but the most discerning Fleetwood Mac fan will have any great interest in this project; nor is it very likely to make the un-enlightened go back and check out any of the Mac back-cat beyond a “grestest hits” type set.  It’s fun in places, certainly, but only really a collection filler for completists.