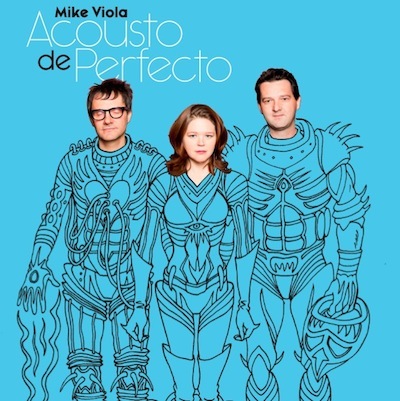 Although some of the material wasn’t as instantly likeable as a couple of his previous works, Mike Viola’s 2011 release ‘Electro De Perfecto’ included more than enough golden moments for it to eventually reach cult classic status among his fan base.  2012’s ‘Acousto De Perfecto’ – as its title suggests – is a quieter, more subdued companion piece to that previous album.  It is not, however, a straight re-recording (as some of you most likely thought):  only three of the album’s tracks are tunes revisited from ‘Electro’ – seven are new, while another is a reworking of a Viola tune from much longer ago.

As good as the re-recordings of those three ‘Electro’ tracks are (the version of ‘El Mundo De Perfecto’ being particularly stunning), it’s the inclusion of the previously unheard songs that make this disc an essential purchase.  Recorded on an 8-track machine – on loan from the Beastie Boys’ cohort Money Mark Nishita – the recordings could have ended up having a homespun quality, but instead – thanks to the strings and sheer professionalism – everything has the kind of polish which we should expect from a finished recording, whilst retaining a sense of intimacy.

‘Secret Radio’ begins softly, the violas swirling, before Mr Viola takes centre stage with a finger-picked guitar line and gentle vocal.  “I’ve been singing to you on my secret radio” he blooms, in a manner which is more accessible – not to mention more optimistic – than on his similarly sparse outing, 2005’s ‘Just Before Dark’. ‘Happy and Normal’ comes with a bouncy tune, driven far more by the strings this time, as Viola muses about his general wellbeing.  While the strings should (hopefully) be what pulls the listener in here, the vocal arrangement is also noteworthy, since Viola combines a great (normal) performance with quirkier elements: classic power pop ‘ba ba ba’s are joined by more aggressive wordless sounds reminiscent of Blue Swede’s ‘Hooked on a Feeling’.

‘Date Night’, sounds rather sad in tone at first, but repeated listens uncover some great melodies from all concerned.  If you’re keener on Viola’s punchier material like ‘What To Do With Michael’ or ‘Strawberry Blonde’, this kind of introspective quality may not strike a chord with you straight away.  However, like most of the songs that filled the aforementioned ‘Long After Dark’, there’s enjoyment to be had, provided you can get into the right headspace.  ‘Primary Care Giver’ – an ode to parenthood – is a little sharper sounding than most of ‘Acoustico’s other tracks.  This is partly due to a brilliant guitar line throughout, but also a multi-tracked vocal which really stands out.   Viola’s gift for penning a thoughtful yet honest lyric really gives this one a sharp edge.

Although not necessarily a great composition, the fun but rather brief ‘I’m Your Dog’ (co-written with The Bird and The Bee’s Inara George) really allows Viola’s natural sounding vocal style to shine as he plucks an acoustic guitar while being backed by violas.  The jauntiness of the piece almost makes the whistling section forgivable…  Although not revisited from the ‘Electro’ sessions, ‘Hair of the Dog’ is another tune that Viola’s fans should also recognise, since it first appeared on ‘Just Before Dark’.  The new arrangement is identical but for the string addition.  Although used rather more sparingly here than at other times, the strings give the song an extra dimension without ever detracting from the sadness in Mike’s voice.  Simply put, it’s lovely.

At roughly the mid-point of the disc – leading up to the three re-recorded tracks – the instrumental track ‘Thing In C’ doesn’t actually feature Mike at all (not even as a writer!).  Instead, the listener is submerged in a gorgeous string piece, which as well as highlighting the talents of Viola’s chosen players, is a wonderful composition all round, the enjoyment of which doesn’t seem to diminish on repeated listens.  Just as ‘Thing In C’ brought the first half of the disc to close, another instrumental finishes the second act. The downbeat ‘Tony Leather Tips’ showcases some rather pleasing guitar work from Viola, while the twin violas which accompany him are drenched in tones of sadness.   Most of the tune is soft, but as it pulls to a close, the strings take on a brief moment of menace, not unlike a string reworking of the intro to Black Sabbath’s ‘Iron Man’.  This is all rather deliberate, since “Tony” refers to the legendary Tony Iommi!  These two instrumental cuts could have easily fallen into the “filler material” category – especially if you’re used to Viola’s usual singalong pop approach.  However, they’re so well arranged, they really add a sense of sophistication to the final product.

‘Acousto De Perfecto’ isn’t always the most cheerful, but, as always, Viola’s vocal performances have more than enough emotional pull to win over his audience.  It would be fair to say this is not the best release for first time listeners (the wonderful ‘Hang On Mike’ and ‘Falling Into Place’ would fit that bill rather nicely), but for the already enamoured, ‘Acousto’ presents another essential disc in an often underrated artist’s already impressive catalogue.