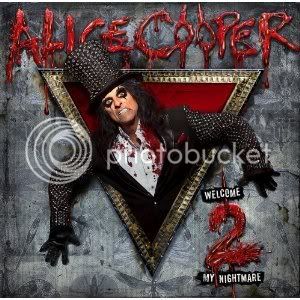 Over the years, Alice Cooper has made us all think of the darker things in life; those things in life the world doesn’t need: spousal abuse (‘Only Women Bleed’), mental illness (‘Former Lee Warmer’), medication misuse (‘Dead Babies’), necrophilia (‘Cold Ethyl’, ‘I Love The Dead’) and a whole host of other wrongdoings. What else could he offer us? His 2011 release ‘Welcome 2 My Nightmare’ doesn’t bring much that’s new thematically speaking, but then, It doesn’t matter whether or not you’ve heard it all before from Alice. More often than not, he’s able to serve up his schtick with a fair amount of style. Revisiting an expanding on an old concept, however, relies on more than familiarity to make it work effectively… However, with ‘Welcome 2 My Nightmare’, there are various key features in place which make the listener hope that – being the professional he is – Cooper may just pull a decent sequel out of the bag.

Firstly, guitarist Steve Hunter is back in the capacity of guitarist and song writer, while Dick Wagner has co-written some of the album’s material. This pairing had a huge impact on Cooper’s original ‘Nightmare’ (and a few of his other 1970s works), so it seems only right they should have a hand in this sequel somehow. Perhaps most importantly, though, is the presence Bob Ezrin, the original ‘Nightmare’ producer. Factor in a few guest spots from original Alice Cooper band members Dennis Dunaway, Michael Bruce and Neal Smith and ‘Welcome 2 My Nightmare’ seems, at least in theory, to have a lot in its favour.

‘I Am Made of You’ opens with the piano motif from ‘Steven’ – providing some obvious continuity – but then it falls on its face. Once Alice starts to sing, there’s something very, very wrong. His voice has been auto-tuned to absolute extremes. Not through any fixing which needed doing, but autotuned in a very stylized way, as if Alice wanted to somehow prove he was up on musical trends from 2010/11. His familiar sneer is coated in an unnatural shine and pitch altering – one which can be heard on any number of r ‘n’ b records; it’s a bloody awful stylistic move, one for which Cher still ought to be blamed. Such a pity, since the musical elements have a fantastic amount of promise, particularly the piano, occasionally militaristic drumming and classy guitar solo (courtesy of AOR legend Tommy Denander). But, sadly, all the great arranging in the world just won’t make up for the presence of autotune where it doesn’t belong. Also, this number has a brooding tone which would have been ideal for bringing act one to a close –it’s great at what it does, but it doesn’t quite sit right as opening gambit. ‘Last Man on Earth’ is far more fun, with a Dixieland jazz arrangement (and a hint of ‘Some Folks’), which works exceptionally well against Cooper’s overly theatrical vocal (which appears in its natural state here, thankfully). The combination of a searing violin, live sounding drums, tuba and banjo and raspy rock vocal makes great listening, and although it’s provides more tongue in cheek theatrics than hard rock thrills…it’s so, so distinctly Alice.

‘Disco Bloodbath Boogie Fever’ takes Alice’s tongue-in-cheek humour and pushes it one step too far, as he “raps” badly over a keyboard driven, semi-danceable arrangement which sounds like someone taking the piss. A choir of vocals which sound like the undead are vaguely amusing, but Christ, once you’ve played it once, the joke’s well and truly over. The closing section dispenses with the frivolity and goes for maximum octane rock, where Rob Zombie’s guitarist John 5 mangles his fretboard. Although the album is supposed to be a continuation of Steven’s horror-filled, childhood nightmares, this isn’t so much a nightmare as throwaway junk. The following track isn’t that much better…‘Ghouls Gone Wild’ resembles ‘Summertime Blues’ crossed with a dose of 70s glam, and tests listener goodwill. Sure, Alice is having fun singing about ghouls with a choir of backing voices – but it’s too far in the direction of disposable. There’s no way this stands alongside anything from the original nightmare. Rather than a piece of music from an Alice Cooper album, it sounds rather more like it belongs in one of the full-length Scooby Doo cartoons. In fact, ‘Disco Bloodbath Boogie Fever’ and ‘Ghouls Gone Wild’ are so awful, let’s pretend they don’t exist.

‘A Runaway Train’ is a stomper, reuniting members of the original Alice Cooper band. Neal Smith’s powers the number with an uptempo drum line which fittingly resembles a locomotive. Dennis Dunaway’s bass is unwavering, while Michael Bruce’s lead guitars are shrill and cutting. It’s doesn’t reach heights of the glam-fuelled proto-metal of this band’s past, but it’s a powerful number nonetheless. The album’s lead single ‘I’ll Bite Your Face Off’ is also enjoyable in a self-parody kind of way, showcasing Cooper, Dunaway, Smith and Bruce on an arrangement which borrows heavily from late 60s Rolling Stones. With a tight musical backdrop and reasonable chorus, it’s not quite the anthem it could have been, but it’s entertaining enough. It has a feel-good nature, once which is sure to work even better in a live setting. It’s great to hear these guys playing together once more – and such a pity Glen Buxton wasn’t around to be a part of it all.

By the time you feel things are getting too safe, Alice serves up ‘When Hell Comes Home’ – an ode to domestic abuse. Centring around a piano’s bass notes and a slightly down-tuned guitar, this number has one of the album’s best arrangements, helping to create a slightly perilous atmosphere. Likewise, ‘Something To Remember Me By’ deserves attention (and maybe repeated listens to get rid of ‘Disco Bloodbath’s bad vibes). Sure, some may find this number a little cheesy, but hearing Alice in full-on power ballad mode (a la ‘How You Gonna See Me Now’) raises the bar considerably. His vocal is mature, strong and still as good as it ever was, but it’s the musical arrangement which is the crowning glory. Chock full of Bob Ezrin’s beloved strings and Steve Hunter’s classy, yet subtle guitar leads, this carries more of the spirit of Cooper’s 1975-78 work than any of the other featured material. Fantastic stuff, indeed.

‘What Baby Wants’ – a duet with Ke$ha – is a pop/rock number which makes good use of programmed and live drumming and a solid guitar riff. Cooper and Ke$ha sound great together, surprisingly, and their combined voices make the most of a catchy chorus. The autotune makes a return, but here it sounds more appropriate (although not better). It’s a great example of Cooper’s desire to always look to new avenues and never settle on the Alice Cooper sound. Similarly, who could have predicted that this time around, Cooper would choose to lend his rock chops to a number which contains elements of new country/country rock? That’s what he’s done on ‘I Gotta Get Out of Here’ – a reasonably enjoyable number with pleasing vocal arrangements and an equally pleasing, twangy guitar lead courtesy of Vince Gill. Both these tracks have great commercial potential, even if neither quite attains “classic Cooper” standard.

Closing this nightmare is one of the album’s other essential listens. ‘The Underture’ takes the original musical themes from 1975’s ‘Welcome To My Nightmare’ and presents them as a heavily orchestrated instrumental medley. The guitar leads are masterful, but no match for a full orchestra under the watchful eye of Bob Ezrin. Although ‘Welcome 2 My Nightmare’ has its share of enjoyable numbers, almost everything gets put to shame by this piece of music (sorry Alice, mate, but all you’ve achieved by sticking this on the end is remind everyone how much better the original ‘Nightmare’ was!). Once it’s finished, you have to ask, would it have been more interesting if Cooper and Ezrin released a reworking of the original album for rock band and orchestra, as opposed to constructing a sequel? Possibly.

Alice Cooper’s 1975 masterpiece ‘Welcome To My Nightmare’ is somewhat of a career defining album, so any sequel was always going to have a lot riding on it – and ultimately risk being inferior. Since this album mixes a few new ideas with hints of seventies nightmares past, while also drawing from the sounds of Alice’s MTV years and beyond, it’s a bit of a mixed bag. Like Meat Loaf’s ‘Bat out of Hell II’ and Queensryche’s ‘Operation:Mindcrime II’, ‘Welcome 2 My Nightmare’ has some decent moments, but it’s never going to match that original release which inspired it’s creation. It’s most obvious weakness, though, isn’t necessarily the fault of too many bad songs (there are only two definite duds, after all); the potential weakness comes from the cut ‘n’ paste nature of the complete picture. There are different musicians appearing on different tracks, recorded at different times in different studios; the album just doesn’t flow, and as a result, doesn’t feel like a coherent concept album. Stylistically, with its similar construction and overall sound, 1976’s ‘Alice Cooper Goes To Hell’ always felt like a natural successor to ‘Welcome to My Nightmare’ – and even though we now have Alice Cooper’s vision of a genuine sequel, nothing changes that notion…