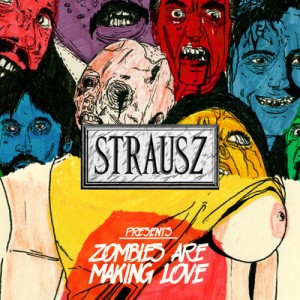 This piece of electronica is a rock opera/concept album about a bunch of zombies who trouble a couple who are in the middle of “making hot sex”. The twist here is that those zombies turn out to be benign and only want to join in, apparently. That’s just wrong. It’s masterminded by Brazilian born Diogo Strausz, who naturally provides all the keyboard loops and other “virtual instrument” sounds.

I love a concept album, and, as a long-time supporter of The Chemical Brothers, Röyksopp, Steve Hillage’s System 7 and The Orb, am not against music with electronic leanings and danceable qualities when done well. But, honestly, this is pretty bad. Strausz claims to have a few key influences within his work: although it’s possible to see where he’s been influenced by the likes of Daft Punk, the claim that you’ll also find Justice influenced dirty bass grooves on this EP is possibly a stretch of the imagination too far. There is a brief section where a bit of fuzzy bottom end gets a moment in the spotlight – and things look up as a result – but any comparison between this release and the finished, professional grooves of an act like Justice is possibly a little insulting…

The opening act, ‘Candle Flames’ is somewhat of a mood setter, with a simple repeated keyboard line. The fact that this gets dull after less than a minute should be a warning. The Spanish guitar style noodlings which break up the main electronic loops should be a welcome inclusion in principle, but the fact that most of the other music stops in order to accommodate those guitar sounds makes the result somewhat jarring. After a badly acted skit featuring the “hot sex” couple spotting the zombies, we’re into the second act. ‘Zombie Hunting’ sounds like the soundtrack from a Japanese arcade machine overlaid with noises of guns, whips and full on zombie groaning. It becomes clear that this arcade machine sound was Strausz’s intention, since at the beginning of ‘Act III: The Duel’ a heavily processed voice shouts ‘FINAL BOSS!’ and there’s a quick burst of an arcade-style tune which seems so familiar. There then follows three a three minute pulsing beat overlaid by a badly played droning keyboard which has a very late seventies feel. Hard enough work on its own, but then it gets worse as the arrangement gives off a bad disco vibe once the friendly zombies start to sing. Yes, they’re singing zombies. No, they’re not very good.

Over the course of ‘Act IV: Time For The Truth’ (the EP’s longest piece), there are elements of twee electronica, but more importantly – once the track finds its stride – you’ll find at least three minutes of a solid, danceable groove, unusually with a bit of grit to back it up. The fact that the grittiness is overlaid by a plinking sound which could have been given a bit more oomph can be overlooked, since Strausz has at least attempted to construct something half-decent here. It doesn’t last though, since ‘Act V: Zombies Are Making Love’ combines tuneless early 90s club-style electronic dirges with more of those shrieking zombie vocals. Whether or not this was intended as a joke, it’s just awful. ‘Act VI: Fresh Meat’ has a very disco vibe, which again turns to high camp once the zombies start wailing. If you’re still listening by now, you’ve got a huge amount of patience.

As far as electronic music is concerned, this EP occasionally has hints of something which could appeal, but there are huge chunks of this release which sound like a man tinkering with a casio keyboard and drum machine in his bedroom for fun. On the whole, it’s all pretty tiresome and it’s hard to imagine even the most loyal of electronica buffs having too much time for this. Maybe more of those promised “dirty basslines” would have helped.