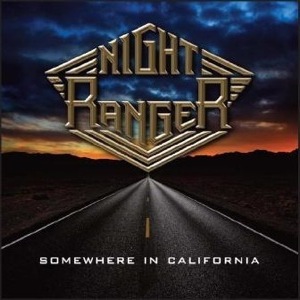 As one of the legendary melodic rock bands, Night Ranger’s back catalogue has more than its share of great moments. Even their ‘Feeding Off The Mojo’ disc from 1995 has more than enough to recommend it, even though the band themselves no longer seem to consider it part of their official back catalogue. 2011’s ‘Somewhere In California’ doesn’t match early classics like ‘Dawn Patrol’ or ‘Midnight Madness’, but compared to parts of 1998’s ‘Seven’ and its successor ‘Hole In The Sun’ (delivered some ten years later), it definitely has a more traditional Night Ranger feel on many of its tracks.

‘Growin’ Up In California’ opens with a staccato riff which gives way to a brief twin lead. Once the track kicks in, against a more 21st Century Night Ranger sound, there are moments which hark back to the past, more so than in a long while. Although heavily filtered (perhaps unnecessarily), the vocals recall classic Night Ranger, but it’s Eric Levy’s ugly synth sounds which are the real clincher. They have the same sound that Alan “Fitz” Fitgerald bought to the first couple of albums (most notably ‘You Can Still Rock In America’ from 1983’s ‘Midnight Madness’). Those keyboard sounds alone are enough to suggest Night Ranger are seeking to recapture some of their early spirit. The hard chug which dominates ‘Lay It On Me’ – coupled with a sneering vocal which sounds like something Jack Blades wrote for Aerosmith – mightn’t be greeted with open arms by all fans (‘Hole In The Sun’ was derided for being too “modern”), but a huge “whoah” on its chorus may redress some balance. It’s a shame that beyond such a promising “whoah”, the chorus itself falls a little short. The featured solo, however, is a corker; more notes and flash than melodic space filler, but even so the playing is superb. ‘Bye Bye Baby’ moves away from chugging rock and delivers something else in the classic melodic rock mould, it’s essence very old-school Night Ranger. The keyboards and guitars have almost equal space in the mix at times, while the vocals shared between Blades and Kelly Keagy are very pleasing throughout. The chorus is where the real greatness comes, though; it’s melodic, it’s simple and infectious – everything you’re looking for from this brand of tuneful hard rock.

Just when you think ‘Somewhere In California’ could be pandering a little too much to Night Ranger’s rock tendencies, ‘Time of Our Lives’ redresses some balance. Night Ranger were known for their big ballads early in their career, and although ‘Time of Our Lives’ doesn’t hit the heights of ‘When You Close Your Eyes’ or ‘Sister Christian’, it’s solid enough. Appearing in the slot which traditionally would have closed an 80s Night Ranger vinyl, it’s a number with a soaring quality, full of great harmony vocals. The lead vocal is a little scratchy in places, but the harmonies make up for that. A definite high point, ‘Live For Today’ melds classic rock and psychedelic elements in a way which would make Kings X proud. This isn’t new for Night Ranger, of course, since Blades has often shown a fondness for fuzzy retro cool; but with its multi-tracked guitars and keyboards fleshing out the sound on this track, he’s rarely captured the mood as well as he does here. On the flip side, a great guitar solo aside, ‘Rock N’ Roll Tonite’ is a horrible embarrassment. Lyrically full of clichéd rubbish, Jack Blades steers everyone through a stomping rocker which tries too hard to create an unnecessary party atmosphere. The least said about it the better.

‘It’s Not Over’ is a number where the spirit of old Night Ranger comes through the absolute strongest. While the production gives things a slightly tougher edge, the overall feel of the song is very 80s. The chorus is incredibly strong – harmonies all present and correct – and the guitar leads exchanged between Brad Gillis and Joel Hoekstra are spot on. ‘No Time To Lose Ya’ indulges the band’s more melodic qualities also, with a punchy rocker which has all the hallmarks of classic AOR. A strong chorus a great arrangement are boosted by a superb lead guitar break which mostly focuses on twin lead work, though naturally, Hoekstra can’t resist throwing in a neat twiddle at the end…Alongside ‘Bye Bye Baby’ it’s a number which represents the 2011 Night Ranger in their most natural way. The end of the track, in particular, with its huge vocals and soloing underpinned by solid rhythm work shows why Night Ranger have always been so highly regarded.

‘Somewhere In California’ is the best Night Ranger album since 1988’s ‘Man In Motion’. Those who’ve been disappointed with the band’s harder sound over the previous couple of releases should certainly give it a listen. Although there are still a few harder rock tendencies creeping in here and there – particularly during the album’s first half – older, more dyed-in-wool AOR/Night Ranger fans should find enough consolation for the band’s supposed former misfires here.