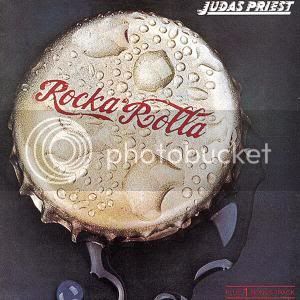 It’d be hard to argue with Judas Priest’s place in the world as heavy metal legends. A band synonymous with motorcycles, studs and leather, twin guitars and more than their share of classic anthems, alongside Iron Maiden, Priest are the band most easily associated with the genre. Their albums ‘Killing Machine’ and ‘British Steel’ (released in 1978 and 1980, respectively) provide near perfect examples of the “classic” heavy metal sound.

It hadn’t always been that way, however. Priest spent the latter half of the 1970s perfecting their brand of twin lead harmonies, screaming solos and god-like metal vocals, but looking back at their 1974 debut ‘Rocka Rolla’ (the first of two albums recorded for independent label Gull Records), an almost completely different Judas Priest can be heard.

Before looking at the album’s songs, it’s only fair to look at the album’s production values. ‘Rocka Rolla’ was produced by one-time Black Sabbath producer Rodger Bain. Bain’s technique of having the band play live in the studio and then using the best takes as the masters made the first three Sabbath albums the sludgy classics they are – a technique so, so right for Sabbath’s monolithic riffs – but generally it doesn’t work here for Priest, whose heavy, bluesy riffs really could have done with a producer with more finesse at the helm. There are moments where Bain’s style of working brings out good qualities in Priest, but for most of this album, it’s obvious that Rodger Bain just wasn’t the man for the job; his world of minimalist knob-twiddling suffocating most of Priest’s subtler elements.

This is obvious from the opening of the album. ‘One For The Road’ is a track which stomps across four and a half minutes with Glenn Tipton and KK Downing’s leaden blues-rock riffing made even more leaden by Bain’s technique. While the production doesn’t bring out the best in the song and even KK Downing’s guitar solo sounds a little echoed and lost among the swampiness, Rob Halford’s vocal performance is decent. It’s clear that even at this early stage, he has the makings of a great vocalist. All the while, that riff hammers away, sounding even more leaden by the song’s end; you can almost imagine Glenn and KK sagging under its weight. ‘Never Satisfied’ also has a heavy riff, although this time rather more hard rock based, making it a track which has much in common with Priest’s sound a couple of years later. Halford’s vocal for this song is strong, but it’s its closing moment which is the clincher. Rob squeals at a pitch which is very out of step with this album as a rule, but is very typical of later Priest: a squeal which would almost become his trademark. (Interestingly, while Judas Priest dropped all of ‘Rocka Rolla’s songs from their live set as early as 1975, Rob Halford included ‘Never Satisfied’ in his solo band’s live set in 2003).

The title track would become one of the album’s best known numbers, thanks to a performance on ‘The Old Grey Whistle Test’. Taking things at a faster pace, Glenn and KK offer a riff that’s just this side of jaunty – more of a cockney knees-up than traditional heavy metal. Halford, meanwhile churns out some near laughable lyrics, not befitting of a man who would earn the title Metal God. It features a use of multi tracked vocals on the chorus (these represent something which should have sounded better, and with a more suitable producer on board, who knows what could have happened?) Between the upbeat vibes, Glenn and KK contribute some half-decent Thin Lizzy inspired twin lead work and Halford even tinkers with a harmonica. Generally, while it feels like the album’s most disposable number, rather perversely, it’s also one of its most enjoyable.

The album’s most adventurous undertaking is a four song suite, often referred to as the ‘Winter Suite’ after its first – and best – part. On most pressings of ‘Rocka Rolla’, the suite is broken down into four separate songs, with CD track markers at the relevant points. Its opening part, the aforementioned ‘Winter’, offers the album’s best look at the would-be heavy metal band. A grinding, heavy riff dominates here – one best likened to a classic Tony Iommi riff. A slow and heavy approach is partly responsible for any Sabbath comparisons, but this is further cemented by Rodger Bain’s production sound (and here, thankfully, it really works). The heavy riffing is followed by ‘Deep Freeze’ – where KK makes some guitar noises with the aid of an effects pedal and a tremolo bar for two minutes (about a minute too long) – before the soft edges of ‘Winter Retreat’ appear somewhere on the horizon. For this all too brief interlude, the guitars have a clean tone and Halford showcases the softer side of his vocal. It feels like a really positive moment; one which really suggests there’s far more to this band than is represented on this LP. The suite closes with ‘Cheater’, propelled by a proto-heavy metal riff, which, like ‘Never Satisfied’ looks forward to a more “classic” Priest sound (in fact, the riff has a very similar quality to the one Glenn and KK would use four years later as the core of ‘Saints In Hell’, from the ‘Stained Class’ album’). Lyrically, ‘Cheater’ doesn’t fit with the winter theme, as Halford sings of a woman who wronged him while the rest of the band rock out. As a standalone number, this would work well as part of the album, but there’s no reason why it should be this musical suite’s closing statement.

‘Dying To Meet You’ represents the most un-Priest-like track on what’s already an un-Priest-like album. A slow blues with gentle pacing, the band back Halford telling tales of battle and carnage; the battle scenario already feels a little misplaced in the understated musical setting, but factor in Halford’s decision to deliver the song in a full-on croon and it’s just baffling. At what seems like the song’s end, there’s a coda attached (sometimes thought of as a separate track, referred to as ‘Hero Hero’) where Priest bring things up a gear. Galloping along at a pace much faster than most of this album’s material, like ‘Cheater’, this provides a decent glimpse of the kind of hard rock/metal Priest would make their forte over the following years. It’s an all too brief ray of light among cloudiness though – and the fact it stops dead in its tracks at just over two and a half minutes leaves the listener (or at least this listener) feeling a little short-changed. Also much shorter than planned, an instrumental number, ‘Caviar and Meths’ (represented here by KK and Glenn attempting two minutes of atmospherics) began life as a fourteen minute epic (written by the band’s original frontman Alan Atkins). The ‘Caviar and Meths’ of ‘Rocka Rolla’ was the intended intro to that epic – stripped of whatever followed, it feels somewhat pointless here.

At nearly nine minutes long, ‘Run of the Mill’ showcases the band’s early pomp and progressive rock tendencies. Against a gentle vocal, Ian Hill’s bass rumbles and Glenn and KK contribute occasional disjointed twangs. Where there should be a chorus, the band break into a heavy riff which doesn’t actually go anywhere…before returning to the main musical theme. At the four minute mark, the band takes on a rambling, almost jam-like state. Hill’s simple bass riff provides the muscle, while (again, low in the mix) Glenn and KK trade off solos; not in the blistering style they’d soon develop, here they have more of a kind of psyche-blues vibrato element. All in all, it makes what should have been a four minute song far too long. The closing section brings Halford back to the mic, where he indulges in some full-on metal screaming. It’s typical of later Priest and a style of music ‘Rocka Rolla’ would have explored father, had Priest got their way.

The band claims there were too many outside influences during the making of ‘Rocka Rolla’. Supposedly, according to one rumour, Gull insisted that Priest shouldn’t be quite so full-on metal and along the way their sound got watered down. Gull’s plan was that by releasing something a little softer, Priest stood a better chance of gaining a bigger following. It didn’t work – but at least Priest didn’t bow to the record company suggestion that the album should feature horns.

Gull Records have long since folded, but ‘Rocka Rolla’ has been licensed out to different reissue companies, who’ve seemingly re-issued it as many times as possible. Some issues feature the original bottle-cap sleeve (which, incidentally, the band also hated) while some feature new “more suitable” artwork, featuring a painting originally commissioned for a Michael Moorcock novel (first used as sleeve art in 1984); some CD reissues have been remastered, some not; some feature the original version of ‘Diamonds and Rust’ (actually recorded during the sessions for their second album) as a bonus track, some don’t. ‘Rocka Rolla’ is a reissue nightmare – and considering it’s almost permanently been available in some form or other since its first licensed reissue in 1984, it’s never found its way into the collections of anyone but the most die-hard Priest fans…and that says a lot.

Marred by a few sub-standard tunes and then having the wrong man produce (a man who decided shelving a few of the band’s best early songs – ‘Genocide’, ‘Tyrant’ and ‘The Ripper’ – was a good idea), it’s a wonder ‘Rocka Rolla’ has anything listenable on it at all. Rather understandably, it’s a mere curio in the Priest back catalogue – an album owned by only the hardcore fan base and one only really appreciated fully by few. Luckily, the band’s second album, ‘Sad Wings of Destiny’, would capture the band’s truer sound. It would be the first of many classic Priest albums, and one which would bring major record labels knocking…