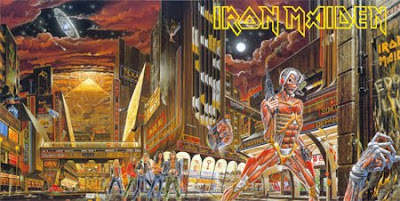 Iron Maiden arguably hit a peak in the mid-eighties with their most adventurous release ‘Powerslave’.  In many ways, the follow up album, ‘Somewhere In Time’ seemed like a step backwards, at least in terms of musical arrangements.  Its release marked the first time where Maiden seemed to be on musical autopilot, firmly believing the old adage ‘if it ain’t broke…’ despite including guitar synths in an attempt to modernise the band’s sound.

Once ‘Caught Somewhere In Time’ has finished its opening gambit of twin guitar leads touched up with the newly found guitar synths, the band power full pace into Steve Harris’s trademark galloping basslines, while Adrian Smith and Dave Murray trade top-notch guitar lines, both turning in impressive solos.  It’s business as usual here and you’d be forgiven initially for thinking Maiden were following ‘Powerslave’ with an equally impressive work.  The quality remains high with the appearance of Adrian Smith’s ‘Wasted Years’, featuring the band at their most brazenly commercial.  As with some of his previous songs written with Maiden, Adrian Smith proved, yet again, he had a great ear for melody and a knack for a great chorus.  At this mid-pace, Maiden get to stretch out a little; there’s more separation between the instruments and the band seem well suited to the more commercial style.  Despite a decent lead guitar arrangement, it was – and always will be – the chorus that’s the real draw here. The more I’ve heard this song over the years, the more I find it a shame that Adrian Smith didn’t get more songs featured per album.  Granted, his songwriting style may be less grandiose than that of Steve Harris’s, but anything Smith has written is always preferable to Harris’s one line choruses.  If only they could have reached a compromise…
‘Sea of Madness’ (another track written by Smith) features the band at probably their heaviest.  The opening riff absolutely thunders as Steve Harris’s bass strings take a pounding.  While not as instantly memorable as the couple of preceding tracks, this one features the energy usually present behind classic Maiden, but once again, brings in another decent chorus, adding plenty of weight to the first half of the album.   The opening of ‘Heaven Can Wait’ shows a brief flirtation with spaciousness and melody, before the band launch into a piece of hard rock which sounds like Maiden on auto-pilot; there’s a decent guitar solo here and lots of other hallmarks from classic Maiden, and yes, the occasional usage of the guitar synths provide a nice touch (I may be one of the only people who thinks the guitar synths are a good idea), but despite those hallmarks, this song runs out of steam mid way, as crowd vocals chant ‘whoah’ in what sounds like a contrived attempt at creating something for the live audiences to look forward to…and by the time the main thrust of the song returns, it only seems to replay everything we’ve heard previously.  It’s here that the first cracks in the album appear and no matter how good bits of the second half are, it feels like an album always playing catch-up to its first three numbers.
‘The Loneliness of the Long Distance Runner’ features lyrics based upon Alan Sillitoe’s short story of the same name.  Lyrically it’s the first of two songs which, dare I say, try too hard to be intelligent.  The twin lead guitars during this song are among the best the album has to offer, but that doesn’t seem to be enough to save something which isn’t particularly song driven.  There’s literally no hook – and its one attempt at a chorus type refrain is delivered rather gratingly.  ‘Stranger In a Strange Land’ is far simpler driving itself along effortlessly via a mid paced bass riff.  Vocally, Bruce Dickinson sounds more at ease and while it’s not as memorable as ‘Wasted Years’, it’s a track which provides the album with another fairly commercial number.  Adrian Smith adds some real class to this track via a brief atmospheric section before the main guitar solo, which takes things up a notch.  Once again, it’s another number written by Adrian Smith: it’s clearly his work which stands out as the strong links on this album.  Sadly, the return to form doesn’t last…
‘Déjà-Vu’ finds the album at a critical low point.  While it provides a great trademark dual-guitar riff, musically it finds Maiden going through the motions; things aren’t helped any by a one line chorus (‘Feel like I’ve been here before’).  By the song’s end, there is a feeling of déjà-vu, since you’ve heard Maiden do this kind of thing time and again…only much better.  Bringing things to a close, ‘Alexander The Great (356-323 BC)’ is marginally better, but not up to the band’s previous standard of closing epics.  Lyrically it’s a little pompous and sounds like Steve Harris wrote it in an afternoon with an old O-Level history textbook.  Parts of the vocal melody sound like they’ve been recycled from previous tunes; musically its first half sounds strong enough, but there’s a feeling of dissatisfaction, especially during a couple of twin guitar leads, which sound like they were lifted straight off of the ‘Powerslave’ LP.  A slower instrumental break during the second half restores some faith, but there’s still that nagging feeling that this has been cobbled together from other previously used musical themes.
In summary, the end package is noticeably weaker than each of their preceding works (except for ‘Killers’, perhaps, since that was half made up of material pre-dating the debut LP).   I think it’d be more than fair to say that ‘Somewhere In Time’ marked the end of a golden run for the band.  It’s certainly the first flawed offering since the arrival of Bruce Dickinson.   Despite half of the material not being quite up to scratch (let’s be honest, if the running order switched ‘Heaven Can Wait’ and ‘Stranger…’, you’d hardly play the second side, would you?), its good points still make it worth spinning once in a while.