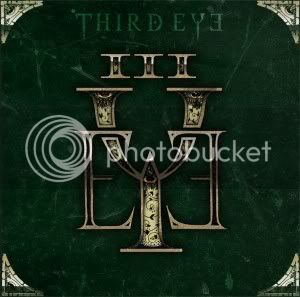 Hailing from Denmark, Third Eye are a progressive metal outfit featuring Michael Bodin (ex-Prophets Doom), Martin Damgaard (ex-Sweet Leaf) and Per Johansson (ex-Crystal Knight/Fate) and in terms of heaviness, they’re up there with the mighty Symphony X. For their debut album they’ve taken a bold step: ‘Recipe For Disaster’ is a concept piece about a man diagnosed with Attention Deficit Hyperactivity Disorder (ADHD) and Obsessive Compusive Disorder (OCD) late in life. I feel I should warn you before going any further that although this album is musically great, it’s lyrics are mostly rubbish and in terms of vocal abilities, Per Johannson’s voice is grating at best. With regard to the concept, it’s only really clear that there’s a concept at all since the band points it out in the introductory sleeve notes! In terms of linear storytelling, I can’t follow this at all. Presented with a concept album with a medical theme, it’s hard not to think of Queensryche’s classic ‘Operation: Mindcrime’, but while Third Eye are gifted musicians, any hope they had of creating a 21st Century ‘Operation: Mindcrime’ seems to be lost in translation.

As a listener, you’re not broken in gently… ‘Solitary Confinement’ begins with a crunchy riff, combined with a punchy rhyhmic quality which quickly demonstrates the band’s musical abilities. A solid rocker, this it’s certainly one of the album’s more straight ahead pieces aside from an occasional off-kilter feel which helps bring it firmly into the progressive metal field. ‘Recipe For Disaster’ follows swiftly and things are taken up a couple of notches. Martin Damgaard’s complex drum work is one of the track’s main features – his angry double bass work provides a great deal of power. This track sees the first appearance of the growlier end of Per Johannson’s vocals; in places he alternates his wailing voice with an angry shouting. I’m guessing as listeners, this shouting approach is meant to represent the frustrations within the album’s central character; it doesn’t quite work though and from a listener’s perspective, it soon becomes more than aggravating. ‘Dark Angel’ sounds better on the surface, as the vocals have been tempered a little. While Johannson’s voice is a strong one, it’s not the easiest to listen to – and even at its most melodic it’s has an edge which some may call “an acquired taste”.

‘Six Feet Under’ pretends at the outset that it’s the album’s big ballad. During the intro, it’s easier to spot why Johannson’s vocals have been compared to Queensryche’s Geoff Tate in another review – the lower part of his range bares a passing resemblance, albeit not a very tuneful one. I suspect anyone comparing Third Eye to Queensryche was just looking for an easy (for that, read ‘lazy’) comparison – like comparing all melodic rock bands to Bon Jovi or Def Leppard. Once the band take a heavier stance, ‘Six Feet Under’ loses most of his promise. The hard edged riffs can be heard better elsewhere on the album. ‘Eye of Envy’ provides a decent amount of riffing, this time leaning a little farther away from prog and farther towards power metal. While this is technically brilliant on all fronts, it’s still unlikely I’d be reaching for it before Symphony X (hey, I’m fairly picky about this kind of thing), but it’s not hard to imagine big fans of Symphony X and Evergrey finding plenty to get their teeth into here. It’s also worth noting that one of the guitar solos is played by Finn Zierler (from the excellent goth/prog metal band Beyond Twilight).

‘Psychological Breakthrough’ reinforces the band’s power metal elements and as such is the album’s angriest moment. Again, I think lyrically it deals with the feelings of frustration within the protagonist, but sadly it has too much anger and no real direction. The lyrics comprise half-formed spite directed at a neighbour (“I say hello, you say goodbye / I smile and you send me a dead letter file”), backed up with lots of “You make me sick / I wanna spit it out” and “you stupid fuck”. Not good at all. At this point, I’m beginning to lose any patience I had. In contrast, ‘Darkness Into Dawn’ features the band’s softer side. Andreas Schumann’s bass work is subtly funky – in fact, there are more subtle elements here than anywhere else on the album and it’s great to hear the band relax and stretch out, albeit temporarily. Per Johansson’s vocal is misplaced though – he still tackles his job at full pelt, oversinging at nearly every step. Business as usual for ‘Snake In The Grass’ and ‘Sacred and the Profane’: in a build up to the album’s big finish, Third Eye plod through a couple of pieces of prog metal by numbers, offering no variation on anything they’ve played previously.

Closing the album is the ten minute epic ‘The Psychiatrist’. After a slightly unsettling intro featuring a conversation between our protagonist and a futuristic automated medical machine, ringing guitars and an uncharacteristically melodic vocal come to the fore. The main riff has a solid chug which sounds natural between the verses and initially the track shows a great amount of promise (although Johannson’s voice creeps into annoying territory before too long). Beneath the heavy parts of the song, Andreas Schumann’s rolling bass work has a great deal of power and a few of the twin lead guitars recall mid-80s Iron Maiden (never a bad thing).
However, any of the track’s good points are undone once the second part of the song appears… Under his medical haze, we hear the thoughts in our protagonist’s mind: “Take this/Eat this/Drink this/Cat piss”… Cat piss? Surely they could have come up with something better? This is swiftly followed by “Do that/Do this/Take that/Read this/Take that/Who cares? They care!” and by this point, I’m not caring all that much, believe me. Three guitar solos towards the end of the track restore some faith – one each played by Michael Bodin and Thomas Kuhllman, and one played by Finn Zierler.

‘Recipe For Disaster’ isn’t a terrible debut if you look at the big picture – it’s got some moments of fantastic musicianship and a great production job, especially considering it’s on a small label – but its weak points are very damaging to the end result.