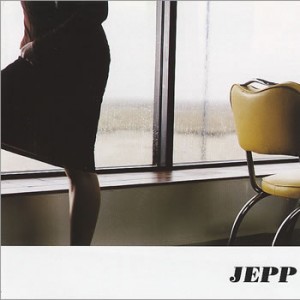 The 1990s were a great time for discovering new music.  Back in those days, there were hundreds of great albums in the bargain bins of London’s independent record shops and at record fairs.  Sometimes they’d be familiar after reading reviews, but mostly cheap albums were purchased because they looked interesting, or somehow seemed

right – like they were produced by someone interesting or had decent guests, you know the sort of thing…  If you’re someone who has obsessively bought albums, you’ve certainly gone through similar rituals yourself.

This self titled album by Jepp received a favourable review in the UK’s Mojo Magazine at the time of its original release, a review which compared her to Rickie Lee Jones.  The reviewer also said that Jepp had a voice which would be an acquired taste.  It sounded like something worth hearing…and sure enough, with a lack of promotion, one appeared in a record fair bargain bin not long after.

There are flashes of music recalling Rickie Lee on this debut, but quite why the reviewer seemed so keen to draw comparisons is a bit odd, since there’s a far stronger one:  Jepp’s voluminous, vibrato filled vocal style owes a great debt to Grace Slick (albeit Grace bellowing rather loudly). ‘Bowling Night’ gets things underway with a marriage of 90’s style fuzz bass and 60’s style vibraphone.  The song is a snapshot of a life, a mother, her migraines and a job she hated.  Jepp’s voice soars to attention-grabbing levels, becomes absorbing and by the end of this, you’ll know whether you love her or hate her – it’s really that instant.  ‘Superglue Low’ has a more blues-rock feel, but as with most of the music on this album, it’s not quite so simple.  Over the low-tuned rhythms, Jepp’s voice is softer than on the opener, less impassioned, but often retaining a sharpness. Lyrically, it sounds like specific storytelling, but the messages seem fairly oblique.

‘Parsons Green’ is much gentler and it’s slightly jazzy acoustic work provides a nice contrast to the fuller sounding previous tracks.  One of the albums strongest moments, Jepp’s voice remains soft and intriguing; the vibes return and some soaring guitar work adds colour.  ‘Go Home Early’ makes great use of string sounds, a solid but simple drum rhythm and more vibraphones – and Jepp’s voice wanders into Grace Slick territory.  By this point, it becomes clear that the album’s great appeal and longevity lies in the care that’s gone into the arrangements and songcraft.  Jepp’s music has so many layers, its retro charm becomes enticing.  The haunting ‘Tiny Dancer’ pushes Jepp’s voice to its most extreme.  The Grace Slick-isms are at their most blatant with forced vibrato; the music is at its most spiky, altogether creating a slightly unsettling atmosphere. ‘The Guy I Like’ pulls together fuzzy electric guitar, great use of marimba and neo-calypso stylings, which at the outset make it sound like an aggressive cousin to Rickie Lee Jones’s ‘Ghetto of My Mind’ (so maybe that’s why that magazine review picked her as an obvious reference point?).  Again the musical layers are appealing – unlike lots of other tracks, the guitar is heavily featured.

Another softer track ‘Las Vegas’ sees the acoustic side of Jepp’s work make a return.  It resembles some of the quieter moments from Bree Sharp’s ‘More B.S.’ album (although Jepp’s debut was recorded some years before), while the acoustic jangle intro of ‘Orbit’ pulls us into album’s most accessible track – Jepp’s voice isn’t quite as hard here and it’s musically simpler.  It’s not without those layers, though, as electric guitars are used to created fuzz (but always sparingly) and beneath everything, the sound of the vibraphone provides a much welcome addition (if you find yourself really getting  into this album, you’ll understand that the vibraphones are key in giving it most of its retro coolness).

Many of those London record stores and their bargain bins are long gone; the record fairs gather dust and attract only the most faithful, but this Jepp album still shines.  It’s been many years since that very first listen, but in all honesty, it’s lost none of that spark.  It’s still unconventionally beautiful and surprisingly demanding on the listener for a singer-songwriter album in the pop/rock vein.  On the whole, this seems to be an album which has been largely overlooked. There’s very little about it, or Sara Jepp (or even her second album ‘7:11’) on the internet.  If you find a copy, do yourselves a favour and pick it up.  Provided Jepp’s quirky voice doesn’t turn you off – or else you aren’t too quick to write her off as an Alanis impersonator (as some, indeed, have in an amazing display of knee-jerk opinions, never taking time to spot that sixties coolness) – there are some great songs to be heard.