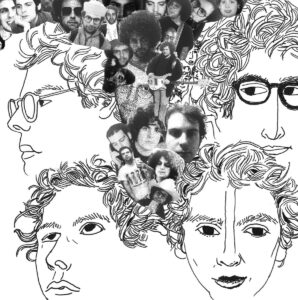 Troper’s 2021 release is something special. Not just in the fact that it gives his fans another great album, but it’s a recording has a good chance of attracting new and very curious ears. Recorded during the 2020 lockdowns, ‘Revolver’ finds the alternative singer songwriter reworking the whole of The Beatles 1966 masterpiece in his own image. Sacrilege, you may think. However, there’s a lot about Troper’s polished demos and lo-fi angle that really suits the material in hand.

The beat group and mod friendly aspects of ‘Taxman’ are obviously a perfect fit for the performer – and quite possibly the instigator for the whole project. The less warm feel to the piece draws attention to the multi-layered vocals which are perfectly arranged and especially cool considering the tiny recording budget, while the rest of the track hinges upon some fairly sharp sounding and 60s fuelled lead guitar. With a strong melodic root in hand – still powered by an upfront bass – Troper goes to work, hammering through the track as naturally as one of his own. Reproducing Harrison’s guitar solo almost verbatim, there’s some decent lead work and even without a full band in tow, everything here sounds professional and respectful. In a similar vein, strong takes of ‘She Said She Said’ and ‘And Your Bird Can Sing’ reinforce Troper’s place in a world of 60s inspired indie rock where the chiming guitar reigns supreme and a natural vocal are good enough for the job in hand. Although ‘She Said…’ resembles the original cut most strongly, the extra use of distortion as musical punctuation is a great touch, almost making it feel more modern in a way, while the crashy coda places extra focus on backwards masking. ‘And Your Bird Can Sing’, by direct comparison, is far less interesting. The demo quality of the recording is more obvious: the bass sounds underwater and the rhythm track is devastatingly thin, and yet, thanks to another round of multi-tracked harmonies and a lot of enthusiasm, it just about holds up. It won’t replace the Matthew Sweet & Susanna Hoffs cover in your affections, but if you strain your ears, there’s a fantastic bassline underscoring this particular take. It’s a pity it wasn’t higher in the mix.

More jangling goodness informs decent takes of both ‘Doctor Robert’ – played absolutely straight, almost as if to reinforce feelings that it’s the original LP’s least interesting cut – and ‘Got To Get You Into My Life’, which actually sounds like a weird Boston Spaceships experiment where the keyboard parts appear to come from stretched tape loops and a harmonic counterpart resembles an out of tune cello. By adding a few of his own twists to the source material, Troper offers a slightly new perspective on some well worn songs, but its when attempting to recreate the even grander stuff that this ‘Revolver’ project really comes into its own. It’s impossible to conjure the perfect baroque qualities of ‘Eleanor Rigby’ in a home studio and on a glorified demo’s budget, but Mo bravely transforms one of McCartney’s strongest melodies into something akin to a Big Star ‘Third’ outtake when higher register vocals collide with sinister organ stabs. Again, a few multi-tracked vocals flesh out the arrangement admirably, but bereft of McCartney’s light touch and beautiful strings, the song becomes incredibly sinister. Maybe this was Troper’s intention: we’ve all become so enamoured with the strings and lushness of the ‘Revolver’ recording, we’ve somehow become blinded to the narrative’s unsettling qualities. One of this release’s definite highlights is the cover of ‘Love You To’, where Troper has been absolutely unafraid of making it his own. Obviously not knowing any sitar players, he takes the opportunity to rework the track as a deep indie drone, almost carrying the ghosts of early Ride, and takes the listener into a dark and semi-distorted indie landscape where the 60s collides with the 90s and the sounds of Harrison’s strange mantra fills a world that could easily have inhabited one of Troper’s own solo recordings. One to be played loudly, it feels strangely nostalgic for a number of reasons; it’s definitely one of the tracks where the performer’s love of denser sounds gets to run free.

‘Yellow Submarine’ sounds oddly incomplete when experienced in a stripped down take, yet there’s something about it that still works. Troper’s greatest gift is in applying his own voice, almost choir-like, to the chorus which makes it feel somewhat more unnatural than hearing The Beatles in full four part harmony, but as before, a few of the punchy bass parts are also great. ‘Here, There and Everywhere’ is still as drippy as hell, but a stronger presence of a chiming guitar takes it into the realm of twee 90s indie – a move for the better, especially as it makes it sound like a Justin Kline song – and the gorgeous ‘For No One’ is reinterpreted as a piece of pop played on a tack piano, drawing it ever closer to the world of Jason Falkner. ‘For No One’ is another of McCartney’s greatest compositions, so the thought of hearing it in a less than perfect way may cause some to baulk, but between his own gift for a stripped down performance and decent vocal, Mo gives it a more than respectful send off.

The perfect pop of ‘Good Day Sunshine’ holds firm under the weight of a strident piano and a jubilant vocal where, once more, the studio trickery affords the homespun recording a decent choir and the return of the tack piano reinforces a weird bar-room angle to what is essentially an old-time knees-up, while the cluttered ‘I Want To Tell You’ transposes the uglier piano parts of the original to an unexpected jazz guitar. It shouldn’t work – especially since it occasionally drowns out the vocal – but it’s fascinating in it’s own way. Never The Beatles’ finest three minutes from a musical standpoint, Mo tempers any potential ugliness by offering a more sedate vocal and its testament to his own confidence that it sort of works. With regards to Lennon’s two most experimental pieces, both work well without being too clever or otherwise revelatory. ‘I’m Only Sleeping’ actually sounds more fully formed thanks to a broader vocal and some extra oohs, while ‘Tomorrow Never Knows’ clings onto its proto-shoegaze feel, but cranks up the volume of the guitars. This becomes especially cool at the mid point when Mo launches into a semi-aggressive lead break that would be more at home on an old 90s alt-rock LP before covering the last verse with extra guitar effects that sound like a cross between bits of descending scales and dive bomb sounds. The track’s repetitive nature means it can be adapted in all kinds of ways – subtle or not – so, given some of Troper’s previous output, there’s no way this could fail.

For good measure, the album also offers covers of The Beatles’ 1966 non-album single cuts ‘Paperback Writer’ and ‘Rain’, both of which are approached in a fairly straight manner, offering some strong, fuzzy guitar chops which will surely appeal to lovers of power pop in the Matthew Sweet and Superdrag mould. Anyone approaching Troper’s work for the first time via these tracks should seek out his ‘Exposure & Response’ LP at their earliest convenience.

The original ‘Revolver’ is a cast iron classic. Mo Troper is one of power pop’s greatest unsung musical champions. The fusion of the two leaves the world a largely enjoyable, homegrown experiment that we may have been denied if it weren’t for the world going into a pandemic lockdown. Although, perhaps, it might have been more interesting if Troper had taken a few more artistic liberties, it’s a great listen all round that certainly shows a great love for the material. If you’re in any way interested in Beatles covers or DIY recording, you owe it to yourself to hear this.