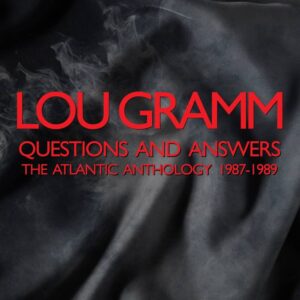 This 3CD set from Cherry Red/HNE Records brings together both albums and adds a bonus disc of extra material, making it the most complete package of Lou’s most undervalued work. The first disc, featuring the ‘Ready Ot Not’ album (originally released in January ’87) often sounds like the natural successor to ‘Agent Provocateur’ and provides every reason to buy this reissue, assuming you don’t already own the original CD. With its combination of mechanical rhythms and crunchy guitars, the opening title cut should be enough to win over first time listeners, since it often sounds like a mid 80s Foreigner workout augmented with a slightly more metallic guitar solo (supplied by Nils Lofgren). ‘Time’ sounds like something from a high gloss, huge budget action film soundtrack when it hammers through four minutes with utmost confidence, combining a Foreigner-esque sound with a shimmering guitar part that seems complimentary to Lou’s voice while sounding very different to something from the Mick Jones school of playing. For lovers of all great 80s melodic rock, it’s the kind of track that invites the volume to be cranked, before things get scaled back again with the pure AOR of ‘If I Don’t Have You’, a piece absolutely loaded with bell-like keys. It’s very the kind of spacious arrangement that allows Gramm to stretch his voice, meaning lovers of the great Foreigner power ballads will find an instant favourite here. Another genuine highlight comes from the US hit ‘Midnight Blue’ which opts for a perfect pop/rock hybrid where Lofgren’s sharp and clean guitar sounds chop against a solid bass from Bruce Turgon, before Lou leads everyone into a bright sounding chorus hook where a few harmonies pull everything closer, again, to sounding like something that would have been a natural fit on the next Foreigner LP.

Despite often sounding like the natural progression from the previous Foreigner LP, there are a couple of times when the album sounds a little different. ‘Heartache’ offers something in the vein of an AOR/tech-rock reworking of a Bee Gees composition due to its steady walking tempo and all round sheen. That might stoke up the cheese factor for some listeners, but Gramm’s voice always shines like a beacon of familiarity, again, making any musical shift seem very natural. Similarly adventurous – in a melodic rock sense – ‘Arrow Through Your Heart’ features a brilliant arrangement where Turgon’s rigid bassline acts as an anchor for some very inventive chopping guitar work from the always distinctive Lofgren. The band’s cold and mechanical edge takes the AOR moods in an interesting direction, again, hinting at the techy edges that had crept into melodic rock at the time of recording, so its a bit of a shame that it’s so lyrically repetitive. Listeners who’ve played the classic Foreigner LPs to death but somehow missed this album will certainly find plenty of interest in ‘Lover Come Back’, too – a number where a spacious, mechanical arrangement actually comes closer to sounding like Robert Plant’s 80s pop experiments. With the keyboards pushed forth and Lofgren taking a backseat, it allows Gramm time to shine and he sounds really at ease when fronting some smart 80s pop.

The second disc features 1989’s lesser appreciated ‘Long Hard Look’ and, again, its ten cuts show Gramm in a position of strength without Mick Jones, and even if it isn’t anywhere near as Foreigner-centric as its predecessor, AOR fans are given more than enough to enjoy. In fact, there’s plenty about its smoother sound in places – particularly during tracks like the John Waite-ish ‘Just Between You And Me’, with its “made for radio” sound and ‘Day One’ which comes screeching from the speakers like the ultimate in goodtime pop/rock – that make it seem even more valid as a solo project. A particular standout, ‘Broken Dreams’ applies an unexpected swagger to some very shiny pop-rock with future Shadow King/Def Leppard guitarist Vivian Campbell complimenting Gramm’s strong vocal with some great muted chords and – eventually – a fantastically huge solo where bluesy undertones bring out the best in his playing. In terms of Gramm stretching out musically, this mix of pop, rock and gospel tinges creates something near-perfect, while the punchy ‘I’ll Come Running’ features one of the album’s strongest vocals set against some brilliant ringing guitar parts. Although there’s something at its heart that might have graced a Foreigner record in another universe, there’s still plenty about its sharp sound – largely thanks to the legendary Dann Huff’s distinctive guitar sound – that sounds like a very different animal. In fact, Huff’s involvement steers everything towards sounding like a proto-Giant, which is no bad thing.

Sounding like a cross between a Foreigner ballad and one of the over-produced, soul tinged tunes from Eric Clapton’s 1986 LP ‘August’, ‘Warmest Rising Sun’ offers some shameless cheese which showcases the bigger end of Gramm’s voice throughout. Although Lou would love to think he’s the star here, it’s impossible not to keep one ear on the basslines beavering throughout. Played by the ever busy Pino Palladino, the bendy, fretless noises represent the pinnacle of 80s perfection, while Peter Maunu’s short but equally perfect lead guitar break further accentuates the Clappo tinges thanks to a clean, bluesy tone. As cheesy as all of this may be, a strong case could be made for it being ‘Long Hard Look’s greatest five minutes.

Bringing everything back to more familiar ground, ‘True Blue Love’ melds a huge vocal to a slightly rockier groove which shows off the ultimate late 80s sheen, while Viv Campbell’s guitar driven ‘Hanging On My Hip’ falls somewhere between the harder edged moments of ‘Agent Provocateur’ and Gramm’s work with Campbell in the short-lived Shadow King (who would release their one and only album the following year). Rounding out the album is a corker of a cover. In bringing Small Faces ‘Tin Soldier’ screaming into the late 80s, Gramm gives it a great send off where the original melody stands firm, but his hired band give it a more modern (for the time) feel with a couple of crunchy hard rock guitar moments, some upfront bass fills and a drum part that delivers the kind of crack that would make the likes of Pete Kircher proud. With no obvious filler, ‘Long Hard Look’ is something of a melodic rock classic – very much an album that genre fans need in their collection.

Disc three is something of a “bonus disc” in pretty much every sense. It brings together various extra non-album tracks and plays like a genuine hotch-potch. It’s only really ‘Lost In The Shadows’ – a brilliant melodic rock track that wouldn’t have felt out of place on either ‘Ready Or Not’ or the later Shadow King album – that’s essential. Even then, if you’re halfway interested in this set and don’t actually own a copy of the original Lost Boys soundtrack, you honestly need to put that right immediately. Two versions of ‘Ready Or Not’ from the original 12” single add very little; a rock mix has a bigger rhythmic punch but rarely feels rockier, while the ‘Extended Mix’ falls into the 80s trap of stretching out the album cut with a couple of minutes of sub-Art of Noise trickery on the end. In this case, beefing up the mechanics and keys during the instrumental section achieves very little and although the extended lead guitar break is welcome, it isn’t necessarily any more effective than the album take. A third, instrumental version of ‘Ready Or Not’ is more than surplus to requirements, since it removes the star performer! It isn’t clear why anyone would have wanted that in 1985, and much less so by 2021.

Fans of the 12” single might welcome an extended version of ‘Midnight Blue’ but, much as before, some extra trickery doesn’t really add anything. In fact, a repeat of one of the verses with the guitars removed only makes the keyboards sound ugly and demo-like. Regrettably, the only extra from the superior ‘Long Hard Look’ sessions is a single edit of ‘True Blue Love’ which seems a little unecessary when the full album cut isn’t far away. Bulking out the rest of the bonus disc, you’ll have the pleasure of hearing a twenty five minute interview where Lou talks about launching his solo career and the making of ‘Ready Or Not’. Previously only available as a promo only vinyl, big fans will enjoy hearing him enthuse about his new world outside of Foreigner, if only the once…

In fairness, this set is chiefly of interest for those who are missing either ‘Ready Or Not’ or ‘Long Hard Look’ from their CD collections. Those who have treasured the CDs for years stand to gain far less, since the extra stuff – ‘Lost In The Shadows’ aside – is very much from the file marked “spin once or twice and move on”. Despite a lack of unreleased material it still serves a major purpose, of course, in making a couple of absolutely superb albums widely available once more. For a major player on the AOR scene, the relative lack of all-round love for Lou’s solo records (and ‘Long Hard Look’ especially) has often seemed…strange, to say the least. Hopefully, ‘Questions and Answers: The Atlantic Anthology’ will afford both releases something of a (long overdue) re-appraisal. They more than deserve that.