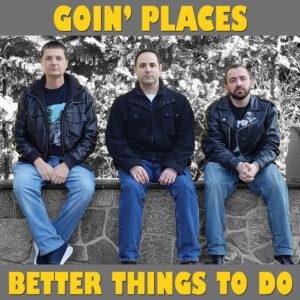 With a very knowing wink, ‘Save The World’ opens the three tracker with acoustic strums, a lyric regarding being “away for a long time” and a sense of being back with an important task in hand. There’s a great deal in the acoustic chord progression that owes a lot to Dr. Frank and, indeed, once the arrangement bursts into a hard, electric riff, Richie’s brattish vocal set against the music’s melodic stance makes the core of the piece sound like an old Mr. T Experience deep cut. Yes, we’re looking at some fairly formulaic pop-punk, but there’s still a lot to love in this mid 90s throwback. Taking into account a very infectious chorus hook and some decent playing, it more than holds its own. With the second verse utilising a dual vocal and slightly sharper sound, the obvious MTX love gets fused with a little MxPx influence with enjoyable results. This shows Goin’ Places to be a solid proposition in the pop punk stakes – regardless of how long they’ve been away.

For those with a childish sense of humour, the title track should more than appeal when Holes and drummer Victor trade off insults against a classic punk riff. Within a high octane eighty four seconds, the guitar drives a really taut riff that calls back to great works by Screeching Weasel and Teen Idols, always showing the three piece band in a positive light. With Victor’s voice being a deeper and slightly more aggressive proposition, the contrast between the twin vocal always adds extra interest, but even their most direct banter doesn’t match the great chorus. In terms of easy hooks, this track is the EP’s clear standout thanks to some well placed harmonies and another melody that comes straight from the Mr T. back-cat.

The closing number ‘Instru Mental’ does exactly what it says on the tin. Viewed purely as an instrumental sketch, its barrage of Ramonescore chords – delivered in a steady, melodic fashion – at first sound as if they deserve a better send off. A couple of spins later, it becomes clear that the multi-layered guitar riff just about holds up well enough on its own. Being a little better than obvious filler material and coming after two very strong tracks, it feels more like a teaser for a forthcoming work.

With a running time of barely five minutes, this EP might seem like little more than a quick distraction, but for lovers of old MTX sounds and other Lookout! Records classics, it’s still a recommended listen. As well as being a welcome reminder of a seldom heard band, for some listeners, it’ll also serve as a handy introduction. As devastatingly short as this EP may be, with some great riffs and a couple of top choruses, it quickly validates Goin’ Places’ long overdue return.