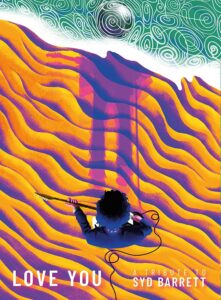 Both records are a document of a fractured mind. The ugly folk rock/dark psychedelia of ‘The Madcap Laughs’ plays out like an audio document of the performer’s mental illness, made harder to listen to due to it’s relatively minimalist approach. ‘Barrett’ has a more conventional rock sound, a warmer production and a few other things that arguably make it a superior album, but Barrett’s musical snapshots show further deterioration. This is painfully obvious in the case of ‘Rats’, with its semi-improvised train of thought and offensive phrases, and the clanging ‘Wolfpack’, where the performer struggles to keep time and rhythm when faced with even the most basic set of chords. Those albums represent recordings that could fall apart at any moment. Indeed, such was Syd’s frame of mind, that ‘The Madcap Laughs’ took eighteen months to complete, when other singer songwriter works of the era would have been done and dusted in a third of the time. Hearing the incomplete takes scattered within the ‘Crazy Diamond’ box set further highlights what a frustrating process David Gilmour, Roger Waters and Rick Wright must’ve gone through to get something – anything – useful on tape. At their best, those albums are an interesting look at a rapidly fading star, with glimpses of what could have been. At worst, they sound like exploitation.

As horrible and distressing an experience Syd Barrett’s solo works can be, they’ve got some very vocal fans – R.E.M. and Robyn Hitchcock included. ‘Love You’, a double disc tribute released at the outset of 2021, doesn’t showcase any of Syd’s most famous fans, but uncovers a huge amount of underground talent showing as much love for his post-Floyd experiments. Perhaps its biggest strength, in terms of tribute, is that it leaves no stone unturned; nothing is ignored. Every one of Barrett’s solo recordings is represented. With that in mind, you have to wonder how it all came together: did the featured bands get the songs thrust upon them, or did they pick? If they picked, did they draw straws? After all, it’s fair to suggest that a handful of Syd’s songs are far better than the bulk of his solo work. Not everyone can have ‘Dark Globe’, ‘Gigolo Aunt’ and ‘Baby Lemonade’. Someone’s got to tackle the uglier works, the twisted howls of sadness at the core of ‘Madcap’, or those tunes where Syd’s guitar work seems barely functional… Despite being a musical minefield in terms of source material, the majority of the bands featured come out of the project brilliantly.

So, we have thirty six tracks, thirty six bands, a lot of Italian acts and no real household names. This makes ‘Love You’ an interesting prospect for anyone looking for new listens. Its best performances aren’t afraid in taking the core of Syd’s songs and reworking them drastically – as it should be; and in the case of the harsher ‘Madcap’ material, there’s a broad canvas for artists to repaint in their own image. This potential is obvious from the outset when Andrea Achilli dresses ‘Terrapin’ with strident piano chords worthy of Rick Wright, some bendy basslines and a shrill keyboard that sounds as if it’s borrowed from a 1970s Schools & Colleges theme tune. The basic melody from Syd’s recording can be heard – and instantly recognised – through the vocal, so you get the best of everything, resulting in some fine prog rock sounds. More interestingly, Bluemosaiko manage to make ‘Dark Globe’ sound like a weird hybrid of Tindersticks and Pulp, while Eugene’s rendition of ‘Love You’ mixes They Might Be Giants’ frivolity with bits of electronica that recall soundtracks for a Nintendo Game Boy. The tossed off lyrics and buoyancy in the tune still clings on to a familiar arrangement, but when heard in such a new way, everything about this seems set to upset the purists. …And it’s all the better for that.

Taking a far straighter approach, Sherpa’s ‘Octopus’ opens with lots of backwards noise before dropping into a demo-like recording where hard strummed guitars mesh against lo-fi vocals. It’s almost like hearing a cleaned up version of Syd’s own recording, especially given the mumbled delivery. It’s great, but not as great as Into The Labyrinth’s seven minute ‘Sister Golden Hair’ which quickly veers from its original remit and into a land of world music with shimmering guitars and tabla driving a great melody. By the time you find yourself immersed in the performance, it’s a bit like discovering a lost Ozric Tentacles track, and for the bigger Floyd heads among the listening audience, there’s almost a perverse joy in discovering some of the extra melodies are drawn from 1969’s post-Syd ‘Grantchester Meadows’. In terms of “artistic licence”, yes, this band have taken a couple of liberties, but it was more than worth it.

With Alanjemaal’s ‘She Took A Long Hard Look’ providing something of a heavy psych sound, things essentially take another musical turn as reverbed guitars and hard drum sounds pull Barrett’s work into more of a shoegaze sphere. The heavily accented vocals are far from tuneful, but the slow, pounding rhythms and fuzzy guitars work hard throughout to create some fine rock, while His Majesty The Baby could well win the prize for most bizarre performance when their take on ‘Feel’ shifts drastically towards the avant garde. The droning aspects and moody vocals are sort of in keeping with all things Barrett-esque, but once the recording drifts into different aspects of world music, it becomes an entirely different beast. With clanging cowbells and rattling percussion suggesting Mongolian moods and a world of tabla throwing everything into an Indian swirl, the core of Syd’s song is soon forgotten. It could be absolutely anything, but that doesn’t stop it being enjoyable in its own way.

The ‘Barrett’ material is approached with even more of a free hand, creating some good, bad and bewildering music in the process. A must-hear is provided by Sula Bassana, whose ‘Dominoes’ takes one of the original album’s more tuneful tracks and twists it into a slow, droning piece where echoing vocals and heavily treated guitars opt for a maximum drug-induced fear factor. More like an off cut from Alan Vega and Martin Rev than Pink Floyd, it’s rarely anything short of amazing. Similarly bleak, but never as cool, Keeper of Atlantis actually improve ‘Wolfpack’ by turning it into a heavily distorted, pseudo My Bloody Valentine performance, instantly getting around the original’s lumpy send off by disguising a boring chord progression with distortion aplenty. Lovers of late 80s/early 90s shoegaze will certainly welcome this, even if some of the prog and psych crowd find it all a little trying. Also cool and feeling the benefit of a makeover, The Airwaves’ ‘Gigolo Aunt’ adds a lot of new interest with end of the pier keyboards, wheezing Blue Beat saxophones and a weird sultry vocal. Rarely has something sounded so different despite clinging onto a lot of the original meter and melodic root.

One of the collection’s absolute turkeys – and let’s face it, there had to be a couple – comes from British experimentalists Phosphene. Their performance of ‘Rats’ is beyond disturbing. The music – if it can be called that – is reduced to electronic pulses and this sort of low budget Kraftwerk sound is joined by a vocal that sounds like it’s coming from the end of a telephone. It’s possible to be bleak and interesting (as proved by Sula Bassana), but this all seems fairly pointless. It’s made all the more uncomfortable by the decision not to skim over the lyric’s outdated racial slur. Luckily, the bad memories this could create are instantly swept aside by The Unforseen’s ‘Maisie’, another heavy shoegaze affair (stoking up the fuzz, it’s got a couple of obvious cues from New York’s A Place To Bury Strangers), which adds further weight to a feeling that the ‘Barrett’ album is better suited to a drastic makeover. If these noisier elements aren’t for you, chances are that fan favourite ‘Baby Lemonade’ (as performed by ST 37) won’t appeal either, but at least they’ve allowed for a bit more of a spacious and natural performance within their guitar-heavy indie rock tribute. As one of Syd’s more “obvious” songs, this could have been taken on by so many and achieved a great result. ST 37, meanwhile, sound committed without being too adventurous. That said, it provides a great track when played loudly, even if – far more so than many of ‘Love You’s other offerings – it has a tendency to make you want to hear the original as soon as possible. Maybe that’s not such a bad thing, though; this is about Syd after all…

Within the ‘Opel’ leftovers, there are a couple more gems, but it’s obvious that most of Barrett’s better work had already been tackled elsewhere. That doesn’t stop The Man In The High Castle lending this collection with another highlight when ‘Dolly Rocker’ becomes a spooky piece of goth infused electronica full of pulsing rhythms, or Hibushibire’s drastically reimagined ‘Swan Lee’ giving another look at how tributes need not be played for safety. Taking on elements of heavily distorted shoegaze and fiery lead guitar solos that sound like Hendrix put through a Jesus & Mary Chain filter, Hibushibire appear to not care for restraint. Again, the jury’s out as to how much of the shoegaze and electronica stuff the average Syd Barrett fan will have any interest in, but on it’s own merits, this is very cool.

In addition to re-workings of everything from ‘Madcap’, ‘Barrett’ and ‘Opel’ and a couple of other oddities, there’s even time for a couple of early Floyd covers. These seem more of a carrot for the casual listener, but both are handled more than admirably. ‘Astronomy Domine’ (as performed by Italian duo Boris Salvoldelli & Umberto Petrin) is transformed into an almost unrecognisable slab of electronica with strong trip-hop overtones. It’s definitely worth hearing as a curiosity, whilst the abandoned ‘Vegetable Man’ mixes dirgy vocal sounds with electric violin and heady indie rock to create something that seems more in line with early Flaming Lips. It could never be called essential, but Nick Bensen deserves a little credit for thinking outside of the box in terms of both song choice and performance.

Although the Barrett/early Floyd apologists may well hate half of this collection, it serves a great purpose. More than providing a platform for a lot of largely unknown bands, it gives Barrett’s songs new life. Things that sounded wonky, troubled and occasionally beyond help, now sing out with a broad confidence, regardless of style. Whether you like the results or not is unimportant; at almost every step of the musical journey, this tribute shows the real heart within the songs and often in ways you wouldn’t expect. These acts all love Syd in their own way and with a fresh set of ears and a little imagination, it’s possible to appreciate most of the songs as if hearing some of them for the first time. ‘Love You’ is, indeed, made with love and comes highly recommended for the broader minded listener.