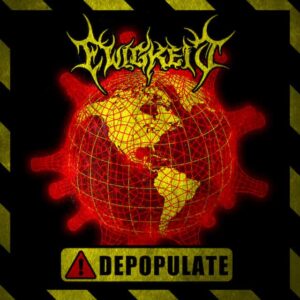 2020 was a busy year for progressive/melodic death metal act Ewigkeit. Their critically acclaimed 2019 album ‘Disclose’ basically set multi-instrumentalist James Fogarty on a roll of creativity and he filled the following year with a wide array of works. The follow up album ‘Scarscape 2.019’ fused Ewigkeit’s distinctive progressive death traits with a science fiction concept that was far less uptight than Arjen Lucassen’s works, before a follow up EP (‘XXIII’) flipped all expectations by dumping the aggression and indulging more of Fogerty’s classic metal influences on a far more melodic disc. He then closed the year by recording some of his angriest sounds to date – material scheduled for release in January ’21 as the ‘Depopulate’ EP.

The five pieces of music that make up ‘Depopulate’ were inspired by the global pandemic and the unpredictable events of 2020 and, as you would expect, are pretty intense. ‘Patent of Death’ begins the musical journey with a straight up thrash/death crossover, where a barrage of jagged riffs recall classic works by Death Angel while a really harsh vocal draws closer parallels with Fogarty’s work with In The Woods than anything Ewigkeit have ever released. The first couple of minutes find the riffs coming at such a pace that the heaviness and speed will only appeal to the older thrash fans, but as long as you’re able to get past that scratchy vocal, it’s a track with so much to give. Those riffs are delivered with such a precision and tightness, Fogarty sounds like a man at the top of his game. In terms of a broader appeal, its second movement is far better, since the riffs slow down to more of a classic Euro metal/Edguy vibe and a couple of twin leads hark back to essential recordings by the likes of Iron Maiden and Judas Priest. Here, listeners – assuming they’ve not been driven away by an especially divisive vocal – will discover a world of classic metal unfolding, before everything reverts to the original riff and Ewigkeit hammer at full pelt, bringing more classic thrash in the process. ‘Biosafety Level 4’ begins brilliantly with something that sounds like an old Megadeth intro, before sliding into a very Ewigkeit-esque chug where thrash elements are delivered with more of an ominous sense of doom. The balance between heaviness and melody is quite precarious, but the playing is impeccable. Fogarty scratches and growls as if he’s fronting a melodic death band, and although this is perhaps at odds with the slower sections, it’s a perfect fit once things take off at breakneck speed with a couple of passages derived from old Death records. It won’t be for everyone, of course, but in terms of thrash/death crossovers, you’d be hard pressed to find the style played much more effectively.

Taking a slower and heavier stance at first, ‘Plandemic’ blends elements of Lamb of God with a few older metallic traits. It’s a track that – when heard at its best – displays a brilliant, dark groove. The simplicity of the riff is everything: by slowing down, everything allows for far more of a threatening presence, and once that blooms into a bombastic 80s riff that pre-figures a few bars of very 80s thrash sounds, there’s little doubt that this becomes the EP’s highlight – it’s far and away so much more melodic than the rest of the material, but without losing any power. That’s not to say the remainder is weak in any way; if anything, the title track has an immediate appeal in the way it openly pays homage to classic Slayer at the outset, before dropping a groove metal riff that’s as big as any you’ll find on the ‘XXIII’ EP, before switching to an unexpected black metal backdrop. ‘The Great Reset’, meanwhile, has the potential to win the affections of extant fans due to a dense sound that takes the guts of progressive death metal and gives them a genuine shake up by adding the kind of density of Strapping Young Lad’s work circa ‘City’. The heaviness that ensues is superb and the blanket of keys lending a futuristic bent is even more so, but – as if often the case – the performance is subjected to scratchy vocals that will always limit Ewigkeit’s quest for a bigger audience. Neither track moves outside of a comfort zone for the seasoned Fogarty, but between them, they really help to give this release a much broader range of enjoyable extreme metal sounds.

In a little over twenty minutes, ‘Depopulate’ shows every reason why Ewigkeit are capable of delivering some of the best extreme metal of the era. The riffs are immense; the production values are solid, and the usual attention to detail within the conceptual songwriting is a reminder of how Fogarty is far and above your bog standard Euro metallers who still seem obsessed with ploughing the tired furrow of corpse desecrating and religion baiting. If you’ve had any time previously for Ewigkeit, you’ll definitely not be disappointed with this EP – it might not break a lot of new ground, but it’s great from start to finish.