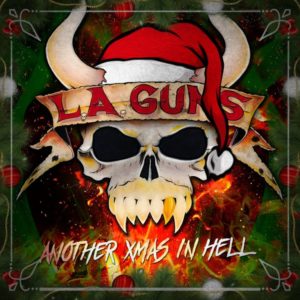 The idea that L.A. Guns aren’t playing this entirely seriously sets in immediately, since the recording opens with an answering machine message from William Shatner asking the band to make a public appearance. He suggests that although the band are “probably sick of ‘The Ballad of Jayne’” they should play it anyway, even though he prefers ‘Sex Action’. There’s something to not think about… After Bill hangs up, the band launch into a brief excerpt from Billy Squier’s ‘Christmas Is The Time To Say I Love You’, quickly showcasing the twin lead guitar sounds of the legendary Tracii Guns and sometime Faster Pussycat six-stringer Ace Von Johnson. Almost as quickly as they’ve found their feet with that tune, it fades out to a drunken singalong of Wham’s much loved ‘Last Christmas’. It’s a bit of an oddball way to start things off as everything kind of plays like leftover snippets. It’s more the sort of thing you’d expect to find as a hidden bonus track.

Moving on, the band couldn’t resist recording their own version of the legendary ‘Merry Xmas Everybody’. The 1973 #1 hit for Slade is one of those tunes that never really seems to go away. As sure as James Bond is likely to be on TV somewhere, this tune is certain to pop up every December and it’s absolutely embedded into the world’s xmas psyche. So, what can L.A. Guns bring to a tune that everyone knows inside-out? As it turns out, just enough of their own charm to make it worthwhile. Phil Lewis’s vocal is a bit more restrained than Noddy Holder’s performance and musically, too, the band rein it in a little. What transpires is a subtly different take on the arrangement where the leanings towards melodic metal give the track more of an 80s glam feel and more of a swagger than a stomp. The big change only really comes with the lead guitar break. With two guitarists at their disposal – both arguably more talented than Dave Hill – listeners are treated to several bars of huge howling notes and some double-handed tapping. It’s good, but whether its as good as Cheap Trick’s own version from 2017 is something very much up for debate…

Following a couple of hard rockers, the band switch to some punk oriented festivities, firstly with a nine second thrash through the traditional dreidel song and then into fantastic cover of The Damned’s ‘Their Ain’t No Sanity Clause’, creating the EP’s true highlight. Taking speed and melody in hand, L.A. Guns bring a distinctly US-centric trashiness to the music as well as a few more metallic hints to the lead guitars, making The Damned feel rather more like something culled from Guns N’ Roses’ ‘The Spaghetti Incident?’ (though a thousand times better, obviously.) Vocally, Lewis grabs the performance and runs with it, snarling and sneering, never unafraid to let his English accent come through on the verses…and it’s genuinely great. Finally, a take on Ramones’ ‘Merry Christmas (I Don’t Want To Fight Tonight)’ is another natural fit for the band – and EP – with a melodic but sharp rendition of a number that, again, allows for plenty of chunky rhythm guitar. Lewis finds a bratty voice that comes much closer to the performances of his youth with glam rockers Girl, which helps give the recording an extra sense of trashiness. [Coincidentally, this release comes amid an excellent Girl reissue programme. 1980’s ‘Sheer Greed’ appeared in November 2019, with a massive six disc version of 1982’s ‘Wasted Youth’ set to follow in January 2020.]

Since Cheap Trick and Twisted Sister have already entered the xmas market, it’s only fair that L.A. Guns should have their fun too…and ‘Another Xmas In Hell’ is fun. While it might’ve been nice to have a full length album, this gives fans just enough to go on with – and in their revisitation of an all-too-overlooked Damned tune, it even gives the world a potential classic that no-one really expected. That alone will be enough to make you glad this exists.