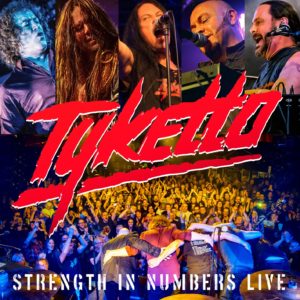 One of the greatest bands to find an audience in the 90s were Tyketto, a superb melodic rock outfit fronted by ex-Waysted vocalist Danny Vaughn. Their debut album ‘Don’t Come Easy’ remains a classic of the genre, despite not hitting the expected sales figures. Featuring the should’ve been hits ‘Standing Alone’ and ‘End of The Summer Days’, their second album, 1994’s ‘Strength In Numbers’ is almost on a par with that; very much the kind of record that no decent melodic rock collection should be without. Following its original release, the band toured extensively and were no strangers to UK shores. Three shows in London between the summer of 1994 and April 1995 gave crowds some unforgettable nights at the now demolished LA2.

Fast forward a quarter of a century and Tyketto are celebrating twenty five years of ‘Strength In Numbers’ with a live recording. Since at least one of those three London shows had been recorded, it would’ve been great to have the anniversary marked with a full deluxe reissue of the album paired an archive live document. Instead, the revamped version of Tyketto – essentially just Vaughn and drummer Michael Clayton Arbeeny with a new-ish band – have chosen to mark the anniversary with the release of a live document recorded in March 2019.

Billed as a complete performance of the ‘Strength’ album, the band have taken extra steps to keep things interesting by jumbling up the running order and chucking in a couple of other period rarities along the way. That’s far more preferable to the fashion for playing an album verbatim and having the audience knowing what’s up next. Regardless of line up, this a fine live album; taken from different sources, the recording is loud and crisp, often sounding naturally live without being drowned in audience noise and the band seem to be in great musical shape. A couple of minutes in, as the band hit the harmonies on the chorus of set opener ‘Inherit The Wind’, Vaughn’s big voice masks the other vocal, but never enough to spoil anything and upon reaching the instrumental break, a lengthy address to the crowd stokes up the atmosphere, giving the feeling there’s a big night ahead. Following that relatively slick number, the classic ‘Meet Me In The Night’ is very rough around the edges, with Vaughn sounding as if he’s struggling to catch his breath on the chorus, while guitarist Chris Green fills the solo break with some really aggressive playing that seems to be at odds with the song in hand. All of this just reminds everyone that it’s all live, of course.

Green’s playing is far more sympathetic throughout the funk rocker ‘All Over Me’, as he lays a mean and dirty groove throughout, something that’s a great foil for bassist Greg Smith’s punchy style. Vaughn, meanwhile, shows how his voice has weathered the decades and during the parts of the track where he’s much less surrounded by big riffs, his abilities to hit the bigger notes are very much evident. There’s some superb harmonica playing, too. If only ex-Ten/Rage of Angels keyboard player hadn’t insisted on smothering half of it in ugly synth brass, it would’ve been so much better. A classic 90s power ballad, ‘Catch My Fall’ comes across as closely as possible to its studio counterpart, with the final mix allowing the acoustic bits to shine throughout and keeping with the more rootsy, ‘End of Summer Days’ gives the set it’s highlight in terms of both vocal and music. Hearing Danny slag off the record label for dropping them sounds like sour grapes so many years later (about the only thing that really grates on this disc), but on the plus side, that leads into a rarely heard b-side ‘Wait Forever’, which is actually better than a couple of songs that made the final cut. Written by Brooke St. James, it casts Tyketto in more of an AOR mould – allowing Rylands more scope on the keys and putting the backing vocals through the night’s biggest test. The crowd receive the track as warmly as the more familiar songs and moving into the Humble Pie inspired ‘Ain’t That Love’, everyone has really warmed up. A full scale, bar room rocker that sounds like an absolute bastard to sing live, it’s solid evidence of Danny’s voice being as good as ever. He really goes for broke throughout, without faltering or straining himself. With the bass and piano taking a lot of musical weight, it gives a great contrast to the previous song and the band sound like they’re having as much fun as the crowd…more, even. With Smith throwing in a funk bass solo, Vaughn encourages the crowd to sing; they’re mixed so low, you can’t really tell how much they’re responding, but it’s safe to assume, the crowd are a few beers down and having a blast. Hearing the recording isn’t the same as being there, but it’s nice to have a record of this rarely played gem.

A shinier sound shows Green’s guitar tones off nicely throughout the softer ‘Write Your Name In The Sky’ and by sliding into the bluesy ‘Why Do You Cry’, the audience is taken between Tyketto’s two extremes in a heartbeat. ‘Rescue Me’ is presented with plenty of muscle, as Green and Smith really work well together. Although closer to filler material in its studio guise, the acoustic ‘Last Sunset’ is a genuine highlight of this live set, as not only does it showcase another great vocal, but the Mellencamp-tastic tune gives Greg a great spotlight on the bass. Saving the best for last, the double-whammy of ‘Standing Alone’ and ‘Strength In Numbers’ captures everyone in terrific form. The semi-acoustic elements of the former capture the intimacy of the club setting while the genuine sweat of the set closer suggests a tough workout, but good times for everyone.

If you’re a fan of live albums, you won’t feel short changed with this one. Granted, it’s audio only (no DVD this time, more’s the pity), but the performances are solid and the odd wobble here and there suggests that at this point Tyketto value atmosphere over perfection (always a major plus with a live document). Most importantly, the sound quality is excellent, making it a great memento for anyone lucky enough to be at the featured shows. …And for those that weren’t, enough enjoyment should be gleaned from just listening back – especially since this recording is good enough to bring back some rose-tinted memories of the original tour all those years ago.