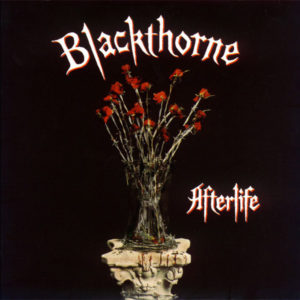 Blackthorne was a band with solid foundations: here, Bonnet found himself collaborating with sometime W.A.S.P. men Bob Kulick and Frankie Banali (guitar and drums respectively), while the bass player’s duties were taken by the superbly talented Chuck Wright (Quiet Riot/ex-House of Lords). Rounding out the line-up of cult rock stars, Jimmy Waldo was drafted in to handle all (underused and barely audible) keyboards. Clearly a reliable sort, Waldo had previously worked with all of the other band members on various different projects: with Bonnet in Alcatrazz, Kulick in the short-lived band Skull, and with both Wright and Banali in Quiet Riot.

Despite the presence of such seasoned musicians, Blackthorne’s debut album has what could only be described as severe flaws. Bonnet attacks the collection of hard rock tunes in the role of full-on screamer and this strangles most of the good material. That said, the rest of Blackthorne approach all of their material in a similarly unsubtle fashion, which combined, has all the subtlety of a sledgehammer, making for an album which isn’t always great. tn fact, most of the time, it’s far from it. Unless, of course, your idea of a good time is being pummelled into submission. Blackthorne offer lots of different things to the listener, but subtlety is nowhere to be found.

‘Cradle To The Grave’ kicks off Blackthorne’s voyage into clichéd rockdom and, while the opening riff is superb, the enjoyment soon dissipates once Bonnet begins to sing. His voice squeals and shrieks like a low-budget version of AC/DC’s Brian Johnson. Had Bonnet received a smoother backing, he may have just about got away with such an extreme vocal style; but since a lot of the time he’s left with only Banali’s drums for company, the overall sound and extreme volume is incredibly wearing. As he pushes his voice that extra yard, you can almost hear the veins popping in his head. The title cut begins with a great swaggering riff (one of the album’s best, especially once Kulick throws in a couple of horsey noises), which is complimented excellently by Banali’s subtle-as-a-truck drumming. Vocally, Bonnet sounds marginally better – especially when exploring the lower registers – but there are still various times where his chosen vocal style does the band and listener no real favours. The heavy riffing and double bass drums at the end of this number are hard work enough, but Bonnet’s screaming can only be described as nasty, which comes as a shock from a man that put in some great performances prior to this album.

As if to reinforce the presence of Graham Bonnet within the band, Bob Kulick kicks off ‘Hard Feelings’ with a riff that resembles a couple of old Rainbow tunes. Bonnet sounds a little scratchy (and screams unnecessarily a couple of times), but during this number, the rest of Blackthorne sound like they’re not trying anywhere near so hard, and as they say, less is more. The inclusion of a few tried and tested “good time” rock vibes improves things no end, while a simple chorus full of gang vocals at least provides the album with something half memorable.

It’s another step backward for ‘Breaking The Chains’ though, as Blackthorne tear absolutely full pelt into a number which sounds like a bad Malmsteen cast-off. High energy it may be, but it’s lyrically very tired as Bonnet works his way through such howlers as “I’m gonna have a party but she don’t like the noise / But I don’t need a lecture, I’m one of the boys!”. It’s almost like he’d been taking lyrical tips from Sacrilege‘s Bill Beadle! There are a couple of brighter sparks here, though, courtesy of Chuck Wright’s bass playing. Occasional hints of slap during an intro sounds like Primus head honcho Les Claypool doing a warm-up exercise are a nice touch and the way he motors through a brilliantly funky mid-section shows what a great player he can be. That funky break is a definite high spot; it’s a shame that throughout most of the song, Wright is required to power things along with far more of a standard rock workout. Thunderous it may be, but Wright is capable of so much more.

‘Sex Crime’ offers mid-paced rock stomping on a number which sounds like a joke rock band (especially once you factor in a few of the lyrics: “just another mental case / with a frowny face”). Bonnet reinstates the forced raspiness from the opening cut, but as he tries to stretch that over various notes, it becomes ugly. Even the backing vocals sound flat as they try and accommodate the slower pace. It’s rather unfortunate, to say the least…but, thankfully, on ‘Over and Over’ there are occasional glimpses of Bonnet’s vocal style from the late 70s which ensures this debut has something else in its favour. There’s also a reasonable chorus, but in some ways, i’s absolutely in vain since any potential is killed stone dead by a plodding arrangement which doesn’t hold listening attention for very long.

Aside from a few glimmers of hope, most of Blackthorne’s output by this point is questionable when it comes to quality, but most of it isn’t as gut-wrenchingly painful as this album’s (almost) cover tune. ‘All Night Long’ was one of the weaker tracks from Bonnet’s short tenure in Rainbow as it was, given its rather crass lyrical content. In the hands of Blackthorne it reaches an all-time low. Bob Kulick’s playing, naturally, has none of Ritchie Blackmore’s distinct flair and he ploughs his way through the riffs in a very heavy handed manner, making huge rock squeals as often as he can muster. However, that’s not the biggest fault here… Bonnet plays up the sexual content of the song with a few altered lyrics and delivers his vocals at top belt throughout, often sounding like a tuneless shouter. His vocal simply has no redeeming features whatsoever. By the closing segment, Bonnet’s voice is absolutely atrocious, which combined with Banali’s hammering on the bass drum pedals equals something which can only be described as agony inducing. It’s almost impossible to believe that this is the same guy who provided the vocals on Rainbow’s original hit single (and their most famous cut ‘Since You Been Gone’, which remains an evergreen classic).

Although this album achieved some success at the time of release (particularly in Japan), it’s far from a great record.  Presumably that Japanese market went a long way to suggesting a second album was in demand… ‘Afterlife’ is a disc which truly raises the bar with regard to very talented musicians getting it very, very wrong. Upon its 1993 release, this was a difficult listen, and frankly, the passing decades haven’t helped it sound any better. When you consider how many great albums Graham Bonnet has appeared on, it makes this seem all the more puzzling.

[An expanded edition of ‘Afterlife’ was released by HNE Recordings/Cherry Red Records in 2016.  The same year finally saw the release of Blackthorne’s superior second album, the long shelved ‘Don’t Kill The Thrill’.]