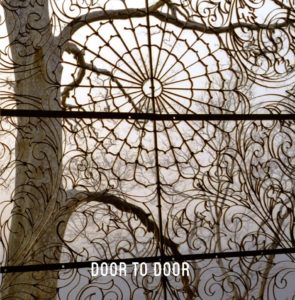 The opening number begins the EP with best foot forward, at least musically. ‘The Green Ray’ has a slow and moody pace; hard strummed acoustic guitars join a heavy bassline and heavily reverbed electric guitars on a tune that occasionally has a hint of Chris Isaak, though this is largely due to the heavy, retro reverb. In the main, it’s more of a blues tinged affair which builds as it goes. Emma’s slight warble and feelings of sassiness occasionally fall in line with Grace Jones, though Grace would never apply her talents to anything so…straight. Overall, although its various influences fight each other for dominance; none ever really wins out. It’s a case of a solid idea being left to flounder – listening is never unpleasant, though you’d be hard pressed to remember this song ten minutes later. Much better, ‘Son of Man’ delivers in several ways. Most importantly, Sand’s slightly accented voice really has a feeling of confidence and comes across as part nineties pop performer and part Euro chanteuse. Longer notes creating a strong chorus melody really allow her to push her talents, while multi-tracked guitar parts reinforce a very retro feel within the music. Again, there are traces of early Chris Isaak at play within the arrangement, thanks to a heavy twang. A muted, finger-picked counter melody that appears throughout the song also adds a lot of extra interest, so between some great, familiar music and a fine vocal, this is easily the EP’s best track. It’s to Emma’s credit that she’s been able to put her name to something that at once sounds so familiar, yet at the same time never sounds like a complete rip off of anyone else.

The EP throws a massive curveball with the title cut. Noodling guitars and crashing cymbals conjure images of Marrakesh – never a million miles away from the more directionless elements of Pink Floyd’s soundtrack for ‘More’ – before dropping into a rhythm that pushes heavy drums to the fore, again, suggesting a Middle Eastern vibe, albeit in a very heavy handed way. Adding choppy guitars against the drums (which refuse to subside), this soon becomes a steady rocker that values moods over hooks. With a quirkier backdrop, Sand’s voice – which values more of a theatrical feel than ever here – finally makes complete sense. Wailing, curling, crooning…her haunted and affected style owes a reasonable amount to the brilliant – and underrated – Lisa Dalbello. Once everything’s in place, this feels like a number that values the voice as an instrument far more than the traditional instrumentation, but that’s not to take anything away from her band: Fabrice Fernaux’s drums and Frank Johannes’s lead guitar work are fabulous throughout.

Another highlight, ‘Silver Ashes’ actually puts her style in a much smoother context. A slow tune fusing pop, rock and bluesy lead guitar breaks, the main melodies are tough and taut, occasionally sounding like something from old Alannah Myles or Beth Hart albums. Sand, in turn, raises her voice to lend the music some equal power. Through each line, she curls the syllables and while there’s still occasionally a sense of volume over style, the feeling of confidence cannot be ignored…and with Johannes adding some great, natural lead work, it’s easily the best track for curious first time listeners. Aside from occasional funk bass, ‘Surrender’ doesn’t think too far outside of the box. A much quieter performance, Sand’s delivery is far less striking and the equal restraint on the guitars means there isn’t always as much to latch on to. Still well arranged, this track is a proper showcase for Fernaux who shows a natural flair for a jazzier style. A spoken word passage promises more than it actually delivers; aside from returning to the vague Grace Jones-isms from the opener, there’s not much of interest…and then the track just stops dead… It seems mean to consider it filler, but coming after three great tracks, it feels that way. Last up, ‘The First Day’ has an unwelcome religious feel thanks to a lyric that suggests “He is coming”, but if you can make it past that, the wavering, dream pop influenced music is a welcome throwback to the 90s. Bringing in partly brushed drums midway helps build on an already fine atmosphere and more of a live feel within the recording ends things with a nice contrast to the previous material. It’ll never be a favourite, but in terms of winding down this EP, it does an effective job.

There are a couple of times where the ideas seem better than the final product, but ‘Door To Door’ is one of those releases that’s actually much better than that all important first listen ever suggests. Stick with it; a lot of the material very much finds its feet as it goes and in ‘Silver Ashes’ and the superior title track, this EP more than shows off some reasonable talent.