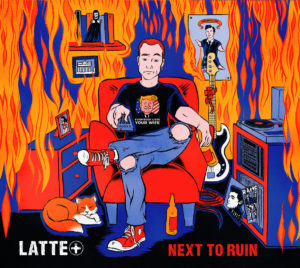 Two years on from their ‘No More Than Three Chords‘ album, Italian punks Latte+ returned with ‘Stitches’, an album that captured the band’s supercharged Ramonescore sound in a slightly more polished way. Despite a better final mix, the band’s sense of speed and guts still dominated and in songs like ‘Everyone Listens To The Ramones Even My Mom’, the Screeching Weasel-tastic ‘Darkness Inside Your Heart’ and the melodic punk punch of ‘Another Sleepless Night’, they managed to show off the complete range of their always improving sound. It seemed like an album that would break them outside of their home country, but despite such a strong effort, Latte+ (always pronounced “LattePiu”) still seemed destined to be found lurking somewhere within the ranks of dozens of other Europunks and not mentioned in the same breath as Screeching Weasel, Dan Vapid and Teen Idols.

Following such a great record was always going to be tough. With 2019’s ‘Next To Ruin’, a definite effort was made not to release a carbon copy of ‘Stitches’. Instead, they cranked the guitars further for a much harder sound and the self-produced disc offers a near flawless contrast of catchy hooks and punk-fuelled grittiness. During the best moments, speed is very much a priority: the title track and ‘Very Abnormal People’ squeeze a huge amount of riffs into approximately a minute apiece, resulting in a sound that owes more to Screeching Weasel’s hard-edged ‘Television City Dream’ LP than Ramones’ ‘Rocket To Russia’. Despite an intensive speed, there’s still a firm ear on a melody, though, and Chicco’s lead vocals tap into classic pop-punk sounds with just enough gloss to counterbalance everything else. Also valuing speed, the rather pointed ‘Everyone Likes Your Wife’ introduces some old-school British style “oi” vocals just in case the main melodies and lyrical concerns don’t make their point directly enough. Far from subtle, it’s best lines clearly point the finger at ineffectual president D****d T**** (“everybody hates your orange face!” might be the most simplistic remark ever, but it makes a great punk lyric), which combined with a brilliant energy, easily makes it an album highlight.

In terms of instant classics, ‘Waiting For You’ and ‘Good Looking Girl’ lend the album a pair of unmissable tracks, and better still, each approaches the genre’s constraints from a different angle. ‘Waiting For You’ finds Latte+ on autopilot in some ways, as they crank through another Vapid/Weasel influenced punker with plenty of enthusiasm, but despite being the kind of thing punk fans will have heard a million times over, it still manages to be massively enjoyable thanks to a great riff and a big key change into a mid-section that accentuates the poppy within the punk. With some well played lead guitar adding more of a melodic edge, it has all of the important bases covered. ‘Good Looking Girl’ slows things down and Latte+ show how they’re just as gifted when it comes to channelling the Ramones, back when those innovators tried their best to channel Phil Spector’s ‘Leader of the Pack’ type teen dramas. The slower riffs really benefit from the full sound of the album’s production and a really simple hook is the kind of thing that’ll stick in your head from somewhere around the second listen.

Fans will be more than aware that Latte+ love a big chorus to compliment their boundless adulation for Joey and Johnny Ramone and a few tracks really hit the mark in terms of all-round infectiousness. ‘Cookie’ manages the near impossible by melding sharp pop punk riffery with a lyric concerning love for a cat (…”sitting on my chest, I’ll always love you my little hairy friend”). It’s one of those tunes that musically doesn’t bring anything new to the Latte+ catalogue, but is still melodically smart, really peaking on a hook that stretches Chicco’s voice into melodies that would befit Dan Vapid, before another Weasel-esque banger ‘Waiting For You’ opts for the simple, repeating the title over and over at speed for a chorus. It’s one of those times where little more is needed for a great number and he same very much applies to ‘She’s The Evil’, a track with a full compliment of ‘whoah-ohs” and a world of harmonies beneath the wall of guitars. Best of all – and firmly cementing that old Ramones obsession – ‘Hey Hey, It’s Dee Dee’s Birthday Today’ has one of those choruses that just invites the listener to sing along in an instant. With a perfect pop punk guitar riff, a fine bassline that’s occasionally pushed into the spotlight and an occasional use of stops, it’s easily the band’s best and most effective voyage into a pure Ramonescore sound.

Packing thirteen tracks into an album that barely clocks up twenty five minutes from start to finish, ‘Next To Ruin’ is absolutely brilliant. Yes, you heard it all before, but this record does it better than most. With no time for filler and barely enough time to get the measure of its great material between the first note and last, it’s a genuine classic. Grab it now.