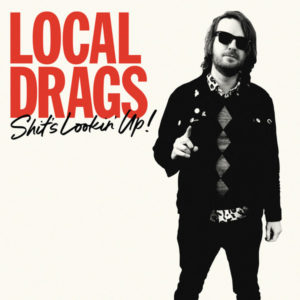 With a hard and fast guitar sound, ‘Can Probably Wait’ chugs out a timeless pop-punk riff from the outset. It’s a riff that’s made to sound as big as hell thanks to a fine production job – one factor that definitely pushes this record a little further towards the power pop market – and the accompanying vocal, while a tad nasal, carries the main melody with a huge amount of enthusiasm. With a steady rhythm throughout and a fab drum sound colliding with various already familiar pop-punk sounds with a teeny amount of power pop drive, it provides a near-perfect first impression. Even better, ‘Plot Holes’ takes the huge sound and although everything is still concerned with a hard and fast chug, a few moments lift the tune with gentle influences from the more energy focused post-punk bands of the early 80s. Hearing this for the first time, you’ll hear echoes of bands like Vapors and Real Kids, giving the track a timeless quality. Like the opener, the general mood is enough to suggest a potential classic is at hand, but a massive chorus that lifts everything further still with a very catchy melody. Simply put, between a fine hook, a couple of chopping rhythms and stops adding to the general punch and a subtle vocal counterpoint, this is perfect pop punk. Slowing down for a tune that applies the kind of guitar work from early Sum 41 hits to a lyric that pretty much revisits the angst of classic Parasites, ‘Hidden Track’ unveils a world of ringing rhythms and shows how Local Drags are capable of branching out more than your average pop-punkers. With more of a power pop mood beneath the over driven guitars, you’ll be exposed to another great chorus before the stately rhythm introduces a brief lead guitar break. The song seems to end abruptly at just over two minutes – there was more than enough reason to wheel out the chorus one last time – but that doesn’t stop it being enjoyable.

The Parasites influence comes through even stronger on ‘500 Hours Free’, a bouncy, melodic punker with a world of ringing guitars to kick things off. Moving into the verse, the band’s love of a Copyrights-ish muted chord takes over, but this only makes the quick hook and return to the louder guitar work have far more of an impact. Hearing this, it’s like the mid-90s never ended…and is all the better for that. It works a few tried and tested styles, but that doesn’t stop it being one of the greatest punky tunes of 2019 along with the infectiously repetitious ‘Trash Bones’, a tune where a sharp and bouncy rhythm is almost everything. Here, Local Drags’ pop-punk sounds meet something that’s a touch closer to the Boston and Minneapolis scenes from the late 80s and the retro flair results in something truly driven with love and enthusiasm. For a return to no nonsense pop punk goodness, ‘the pacey Water Wings’ sounds like Dave Parasite, only having written for Sum 41 yet again and in under two minutes, the band smashes a great riff into their listeners’ skulls. If you’ve half enjoyed anything on this record so far, then this will be another firm favourite.

Very few albums are perfect and there’s a definite misfire here. The acoustic ‘Double Bird’ is a safe strummer that although appears to be well written – occasionally with the air of an old Lemonheads b-side – it uncovers the limitations in Lanny’s voice, while feeling like it’s much longer than it is. Obviously, there are a lot of fans of bands like Dashboard Confessional out there and they’ll probably still enjoy this, but in the context of the album, it doesn’t really hit the mark. Luckily, the record ends with its absolutely finest three minutes. Although clinging to a very 90s pop-punk sound – likely due to the Copyrights connection – the band’s title song ‘Local Drag’ comes closer, once again, to hard-edged power pop. Huge ringing guitars set the tone for a number that sounds like a hybrid of Parasites and Replacements and its a number where the vocal really shines as Durbin evokes the 90s emo style, pulling every ounce of melody from a fantastic hook. Despite its lyrical concerns of feeling held back by the place in which you live, there’s something about the arrangement that just seems so uplifting…and unexpectedly so. If you were in your early twenties in the mid 90s and spent a lot of time seeking out the latest pop-punk and indie rock releases, this will feel like an old friend.

Although ‘Shit’s Lookin’ Up’ very often sounds like a mix of its many classic influences, it doesn’t make it a weak or lazy record in any way. Everything is fantastically produced and most of its ten songs songs are played with absolute conviction. Even if the names of the musicians aren’t familiar and even if you live a thousand miles outside of Illinois, within these shiny black grooves you’ll uncover one of the best power pop-punk records of the year.