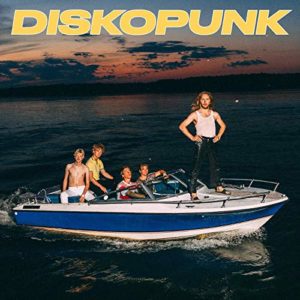 With a bass rattle counterbalanced by synthy melodies, the lead track – and previous single – ‘Soaked’ is one of the most direct examples of Diskopunk’s crossover sound. The grooves are rigidly funk and dance oriented, but there’s a hook laden song over everything drawing very heavily from a world of indietronica. The chorus melody is a cheeky one as there’s something irritatingly familiar about the descending vocal, almost as if it’s been lifted directly from Weezer’s ‘Hash Pipe’, but that only helps to push the number further towards an older indie crowd. By the time the second verse kicks in, Diskopunk lock into a sound that almost sounds like a disco-fied Muse, as traces of ‘Supermassive Black Hole’ sound like they’ve had their guts ripped out and then remixed by Justice. It’s certainly good start…and if that appeals, the rest of the EP – although a touch more varied – is of a similarly high quality.

With a more instant melody throughout, ‘Breathing’ provides an early highlight with more of a crossover sound. Funk basslines are always a plus, but the way this takes a Chic-ish groove and fuses it with some very Scandinavian sounding indie very much creates a signature sound for the band. The indie elements occasionally float through the funk in a haze; the multi-layered vocals and soaring guitar parts – sounding like multitude of theramins – are definitely cool. By this point, things that occasionally sounded like a little clumsy on parts of ‘Soaked’ drop firmly into place, especially with Discopunk pushing the disco element of their sound. In a similar vein, but adding a few stabbed synths, ‘Lilla Pojke’ reinforces the pop, but retains a vague indietronica that feels as if Portugal.The Man have had an odd influence. The synthpop angle also reminds of the best Royksopp experiments, which obviously, lends Diskobox far more of a melody to their musical arsenal. That said, if you like synths and electronica but struggle with disco and pop, the overall enjoyment of Diskopunk will definitely still hang in the balance.

After a few tracks that really gain momentum as they go, ‘Sugar’ drops some really big beats against funk driven electronica, resulting in something that sounds like a collaboration between fellow Scandinavians Royksopp and Junior Senior. The filtered opening, especially, brings back very strong memories of Royksopp’s own smash ‘Eple’, before branching into a really melodic indie pop workout. Again, it’s main source of joy stems from a heavily accented voice against a wall of keys. With some huge grooves, an even bigger chorus and occasional keyboard flourishes that steal from ABBA, this is almost perfect for the style. Its perfect treadmill pace, while the infectious hook and lead guitars (desperate to pierce through with an Eddie Hazel mournfulness) mean that, in lots of ways, it’s got it all. Finally, ‘Never Die For You’ seems more low key. A repeated bass loop finds a rhythm close to Kate Bush’s ‘Running Up That Hill’ – a style that drives the verses exceptionally well – before switching to a light funk chorus on which the once gently emotive vocal explodes into another triumphant pop chorus. Diskopunk weren’t shy of pop previously and this number could easily have been covered by Sia or Tove Lo, such is its general unashamed hookiness. Adding a bit of balance, the second half of the track is purely instrumental. Latching onto its main groove, keyboards drone and soar as if three theramins have been brought into the studio, before raising pitch gradually, lending an already great tune a mildly diverting climax. As the final notes fade, leaving the listener hanging, there’s a strong temptation to listen to it all again…

Across these five tracks, Diskopunk’s fusion of pop and dance styles is brilliantly constructed. All tracks need at least three or four plays before everything clicks, but when it does…it really does. With a couple of heavy throwbacks to the nineties and a fondness for funk guitar, this EP has the potential to cross over from pop into an indie audience, but anyone looking for intense sounds or any sort of edginess should probably look elsewhere. For anyone hoping to discover a more tuneful alternative to Yeasayer or something more interesting than the over-exposed Daft Punk, this self-titled disc will be more than worth the twenty minutes of your listening time.