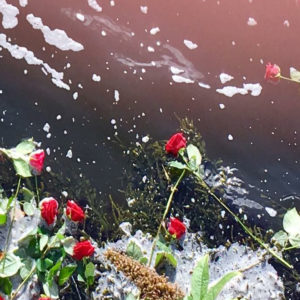 In ‘Get Me Out of Here’, the band have chosen something with a mid-pace as an opening statement. Given that Uniforms can play at great speed, this is something of a surprise, but the track’s jagged riff and punchy rhythm still has plenty of appeal. The way a two chord riff cuts through everything from the very beginning occasionally sounds like Stuart Adamson’s work with The Skids, while the burgeoning riffs that fill other spaces between often come across as the most angsty blue collar rock, which eventually leads to a hefty growl of a voice delivering the final lines. In the lead up to that, mind, there’s not always much that’s “traditionally” friendly about the number, as it seems fairly low key for an opener. Low key in punk terms, of course, still means some riffs and a big feeling of attitude. This is good…but the EP gets better. Much better.

As previously mentioned, the gruff vocals can be a little hard to take, but in the case of ‘My Wise Friend’ especially, you’ll find a hard and fast punk belter that’s musically as confident as Rancid colliding with early Gaslight Anthem. Especially enjoyable, the way a fast, ringing guitar brings an old late 70s sound firmly into the present, while a natural vocal isn’t shy in letting frontman Derrick’s Scottish accent to cut through on occasion. His rattling voice eventually sounds like a fine, angry counterpart to a relentless guitar, which between verses offers a really fantastic riff.

The EP’s highlight, ‘Searchlights’ has the guts and energy of Austria’s DeeCracks, but also a very American sounding pop punk drive, occasionally sounding a little like early Face To Face. The coming together of a great guitar tone and speed driven bass results in the EP’s very best intro, whilst dropping into the verse, the track shows the finest balance between grit and melody. Easily the track which best suits the vocal, by the time Uniforms have grabbed a hold of a great chorus, there’s more than a pinch of early Gaslight Anthem at stake. Using a spacious bridge to their advantage, they’re able to go back into the main hook with a real vigour before bowing out on a truly crashy riff. Streets ahead of the opening track in terms of performance and song-writing, it’s as if the whole release was building up to this. Great stuff.

A bonus track on the digital release, ‘The Constant Here Is You’ deals with a messy break-up/lifestyle change and melds a bitter lyric to a sparse guitar part, before finding its place as a piece of no-nonsense street punk that ushers in unfussy gang vocals in the style of the Terraces, whilst the music gradually becomes more Rancid-esque. By the time a sharp guitar solo fills a few bars, the wobbly beginnings are almost forgotten; by the time the dual vocal latches onto a rousing chorus hook one last time, it’s obvious that although this is a digital only extra, it is almost as good as the tracks featured on the vinyl EP itself.

In terms of bringing a very retro sound into the twenty first century, Uniforms do so with guts, enthusiasm and some hefty boots. If you’re able to get past the gravel-toned voice, these songs are absolutely brimming with great riffs and surprisingly big hooks, and especially so in the case of ‘Searchlights’, which shows how pop punk really doesn’t have to focus on the pop part to leave behind great melodies. While this EP might still be a little rough around the gills for some, for lovers of a tougher punk drive, it’s a welcome return.