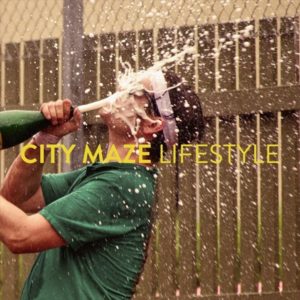 Sweden’s City Maze are a rock band featuring members who’ve had prior links with Melody Fields and Blisterhead. Their 2018 EP ‘Lifestyle’ features four songs that sit somewhere between radio friendly 90s styled rock and the gently alternative. There’s nothing edgy or challenging about their sound, but given Sweden’s track record for great music, it wouldn’t be too much of a stretch to expect, say, something relatively enjoyable. What actually transpires is a lumpen Weezer-obsessed trudge through four songs that don’t deserve being heard more than twice.

The four songs barely stretch beyond a boring four-four rhythm; the vocals are often flat and any attempts at melodic harmonies to give anything a lift largely fail. ‘Poor Catrina’ is especially cumbersome. The guitars chug away in a fashion that suggests a band with no imagination or flair, while a chorus aims for big but ends up sounding generic and uninspired. By the time the chorus is wheeled out for the last time, it’s hard to believe the song has only been on for approximately three minutes. Moving into ‘In The Shadow’, the desperate desire to be Weezer becomes even more obvious, as the guitar riff shamelessly launches into something that sounds like a badly played version of ‘Island In The Sun’, before everything retreats into a heavy, rhythmic chug that gets particularly tedious after a minute or so. More care has been applied to the chorus and gang vocals, but this only has the knock-on effect of making the lead vocal sound even more tuneless than before. Honestly, there’s nothing here to get excited about.

Sounding heavier at first, ‘The Rooftop Boy’ begins with a real intent, but it’s only about two bars before the urge to play another Weezer infected dirge kicks in. While the fatter sound is potentially an improvement – especially in bringing out the bass, playing assured riffs throughout – the vocal is particularly bad. During the verse, it curls in a way that could be considered an acquired taste, but upon rtackling a genuine non-event of a chorus, it wails in an untrained manner that makes City Maze sound even more like a third rate bad bar band playing Weezer covers. The urge to hit the stop button even before the song reaches its end is unbelievably strong… Still, as terrible as this might well be, it’s a rock masterpiece compared to the NFU EP from 2016.

A vast improvement,’Running Out of Time’ begins with a ringing guitar playing a circular riff; it presents something much more melodic and potentially interesting, at last. There’s something about the arrangement that follows that continues to brighter and perkier, with traces of The Killers providing an alternative to the previous Weezer drudgery. A couple of listens unveils something unexpected in that the lead vocal (probably unintentionally) settles upon a melody that’s dangerously close to Art Garfunkel’s ‘Bright Eyes’…and for that reason alone, this track stands out far more than the others. The harmony even vocals work out for the best, even edging towards something with a more power pop stance, so it’s actually a great shame the band couldn’t do any better than “It feels like I’m running out of time (x3)” in the chorus writing department. So close, but so far…

Since Sweden offers dozens of new rock bands on a weekly basis, they can’t all be fantastic, but in the main, City Maze are especially forgettable. Sometimes they even stretch as far as being quite boring. Unless you’re a Weezer obsessive who takes some kind of morbid pleasure out of seeking out every band that’s desperate to mimic Rivers Cuomo and company, just don’t bother with this at all.