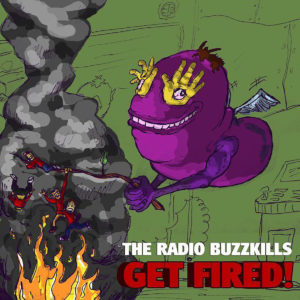 The Radio Buzzkills’ 2016 EP ‘The Quick & The Cheap’ was so named for very good reason. It contained some fun material and wore a love of Screeching Weasel shamelessly upon its sleeve in places, but as punk releases go, it was indeed created on the cheap…and very quickly. Everyone has to have something from which they can build, though, and the release and the band caught the attention of the legendary Dave Parasite who agreed to produce their next full length.

The band entered the studio in June 2017.  Parasite’s role became more than that of producer: he played various instruments, added backing vocals and co-wrote songs.  He became the punk version of the band’s own Mutt Lange.

‘Get Fired!’, in punk terms – and in direct comparison to the Buzzkills’ previous EP – is a sonic revelation. Parasite’s production style is entirely sympathetic with The Buzzkills sound, bringing out a world of trashy, ringing guitars and punchy drums throughout. His influence is clear, but none of that would mean a thing, of course, if the songs weren’t up to scratch, and in the intervening year and under Parasite’s guidance, the band have really matured. In short, with this album, The Radio Buzzkills sound truly ready to mark their place within the pantheon of great pop-punk acts.

Taking a Screeching Weasel riff and Joe Queer styled sneering vocal, the tongue in cheek ‘I Wanna Go Down To The Basement’ (written by Parasite with the Buzzkills) flips an old Ramones classic on its head, giving rise to a world of nervy gang vocals on a fun chorus. The way the speedy drumming locks into an equally speedy chugging riff is a pop-punk dream and the claim that “I’m so punk rock / I‘m not even scared” is guaranteed to raise a smile. This is one of those numbers that after three or four listens feels like its always been there – as much a part of your pop-punk essentials as ‘Blitzkrieg Bop’, Ramones’ original ‘I Don’t Wanna Go Down To The Basement’ or even Screeching Weasel’s ‘Totally’. You could claim its pretty much of an identikit pop-punk variety – much like Riverdales’ work – but it’s created with love…and it shows.

Showing off a love for the Weasel most brazenly, ‘Third World Tour’ drives forward apace with a grubbier riff and frenzied drumming, topped off by a fiery, gravel-edged vocal. If it sounds more than a bit Weasel-y from the outset, it really flaunts it on the chorus where the punky riff throws up a very distinctive chord change against a shouty vocal and the results aren’t a million miles from Weasel’s own ‘Pervert At Large’ and/or ‘I Don’t Give A Fuck’. Whatever…it’s great and Gabe (on loan from Dan Vapid & The Cheats) gives his drum kit hell in the process. Taking a sidestep into surf punk, ‘The Fishman Cometh’ offers a fat bassline (courtesy of Jenny Farrell) and cool echoing guitar, resulting in something that sounds like a mutation of The Lillingtons and the ‘Peter Gunn’ theme by Duane Eddy. Introducing some cheeky handclaps during the chorus lifts the spirits a little higher, resulting in a fun track all round. It’s good to hear the band breaking out of their obvious comfort zone once in a while.

An instant classic, the title track was inspired by frontman Zac leaving his job during the creation of the LP. In a near-perfect two and a half minutes, it not only taps into a timeless Ramonescore riff, but also takes a side-swipe at the working world through the eyes of a now unemployed thirty-something: while everyone’s working their arses off in jobs they hate, he’s home watching Star Trek repeats, eating pizza and gently re-evaluating the universe from his favourite armchair. The spiky melodies are superb – there’s a whole world of twin leads here, pepping the punkier elements; there are handclaps that don’t sound weak and – perhaps most importantly – an increased focus on backing vocals. All things considered, this sounds completely professional and the slight hint of an old Parasites sound throughout certainly doesn’t hurt. With a slightly slower pace, ‘Punk Rock Angel’ – another Dave Parasite song – is a fine punk rock tale of love, with a relationship forming over a solid mid-paced chug. Again, the classy production really helps make a good song great and with another selection of harmony vocals, some great drumming and a call out to The Mr. T Experience, this is a great homage to MxPx’s classic LP ‘Life In General’.  It’s here, understandably, that a Parasites influence comes through most obviously.

Perhaps the weakest track, ‘When Something Turns To Nothing’ is hampered by a vocal that’s just a little too gruff for the job in hand, but manages to stay afloat by offering a hugely melodic twin lead guitar break, catchy chorus and a general feeling of confidence, while ‘The Greys’ stokes up a few shiny backing vocals, drops in a simple but very melodic guitar hook and ends up sounding like an old favourite from those punk comps of yesteryear. More punchy Weasel-isms pump the heart of ‘I Don’t Care’ at the outset, before making time for a pointed lead guitar break, eventually ending up in a semi-thrashy world that recalls ‘White Trash’ era NOFX. If at this point the Buzzkills sound like the sum of their influences, in some ways, that’d be the case; however, it’s not a criticism when they recycle their influences better than most. Closing the LP, harmony vocals and a slightly snotty vibe tell a tale inspired by ‘The X Files’ (these guys clearly love their sci-fi), and – very much a fitting end to a largely great album – the rhythm guitar comes at wrist-spraining pace but drives an incredibly tight tune. If not for the title track, ‘Punk Rock Angel’ and ‘Basement’, this would be the standout…but when the quality threshold comes as high as it does here, it’s likely that everyone will disagree over personal favourites…

You want essential old school pop-punk? Look no further. Much like the K7s debut, this is a brilliant throwback to those 90s glory days when pop-punk was great. The days when pop-punk actually meant pop-punk and not some “ruined by New Found Glory” idea of pop-punk that eventually spawned a huge number of hideously commercial bands like Neck Deep. In twenty eight minutes and a dozen songs, although a rather troubled production, ‘Get Fired!’ shows how it should be done.

Read an interview with The Radio Buzzkills here.
Read a review of ‘The Quick & The Cheap’ here.