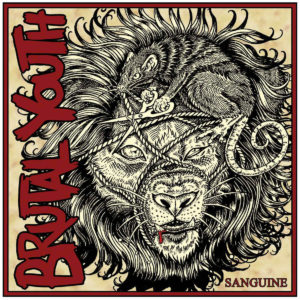 Hailing from Toronto (via St. Johns, Newfoundland), Brutal Youth have shared stages with Sick of It All, Descendents and old-school UK shouters Cock Sparrer. This third release – mixed by the legendary Mass Giorgini – captures their aggressive and insanely focused sound on a studio disc without losing too much of the intensity you’d expect from a great live set. With a sound that fuses hardcore roots with a touch of skate punk, then combines that with a distinctly Canadian edge – as per Propagandhi and Ste. Catherines – ‘Sanguine’ is one hell of a punk record.

It’s fourteen songs play as a cycle of emotions: denial, anger, bargaining, depression and acceptance, but even though the twenty three minute collection very often comes over as an unstoppable mix of anger and hostility, a combination of superb playing and songs with a thoughtful lyrical palate act as a constant reminder that these guys are a cut above so many. They are by no means just throwing out basic and meaningless hardcore strops.

‘I. Denial’ begins this musical journey with a slow and almost metallic riff, before switching gears to reveal lightning fast hardcore punk. More impressive than its crossover musical stance, though, is the choice of lyric which looks through the fug of the titular mindset in an attempt to cling onto something very positive: “We’ll find our way, day by day and piece by piece / Take these words for all they’re worth – you’ve gotta hold on to all you’ve got.” shouts a singular voice, occasionally peppered with trusty group vocal whoahs. With that, the album gets off to a classic start…and, from then on, rarely lets up. A complete shred fest topped with a throat shredding vocal, ‘Chlorine’ shares a spirit with Falling Sickness (sans ska breakdowns), before branching out to reveal a semi-complex counter melody in the vocal department. It’s a great hardcore showcase, proving that so much can be achieved in just over a minute, while another stand-out, ‘Whiteway’ shows a more obvious root in old school New York hardcore, with plenty of rattling bass echoing the mid 90s work of Craig Setari – something of a band strength and a recurring musical motif.

‘II. Anger’ thrashes with a hardcore purity – first, concentrating on a speedy riff before focusing more on a vocal arrangement that smashes into your skull with a full compliment of whoahs. Much like ‘Chlorine’, it shows that so much can be put across with brevity and immediacy. The title track, if anything, delves even deeper, bristling with a boundless fury, bringing more aggressive bass work underscoring an early hardcore inspired speedfest in places and a Ste. Catherines-esque toughness in others. When slowing down on this track, it’s clear that the band are not only tight as fuck but also recognise great punk melodies.

For those hoping for something a touch more melodic, ‘The King’ is a sure fire punk classic. Here, the band chops in some of their more sledgehammer elements for a spikier chugging sound, driven by tough downstrokes and (eventually) a cool bass that’s very high in the mix. With a superb riff coupled with a massive suckerpunch of a chorus, this track comes across as the harsher cousin of early Rise Against, which is no bad thing. ‘Thick As Thieves’ also lends the album a feeling of broadness by combining speed, melody and sharpness throughout, before bowing out with a wholly infectious and expletive laden chant. It occasionally owes a slight debt to the skate punk sounds of Pennywise, but frankly, Pennywise haven’t written anything quite this memorable in years.

‘III. Bargaining’ kicks off with another classic bass riff, before settling into a punk stance that really accentuates the full sounding guitars, which when coupled with shouty gang vocals and some great hi-hat work results in a winner, even if the overall sound is very much of the tried and tested. ‘IV. Depression’ comes across like a cross between early Rise Against, Strike Anywhere and late 90s crossover punk, but like ‘The King’, it also shows the band at their most accessible. The considered balance between anger and melody certainly makes this one of the album’s essential cuts, while both ‘Sandpit’ and ‘Hostile Work Environment’ add no-nonsense hardcore thrills in very quick succession, with the former even daring to tease with a speedy lead guitar break and the latter showing a love for Gorilla Biscuits and the early Revelation Records classics.

Finishing with ‘V. Acceptance’, Brutal Youth somehow manage to squeeze all of their best traits into a frantic two minute pay-off. The chorus is a hugely melodic and bouncing punky affair, coupled with enthusiastic vocals. Parts of the verses, on the other hand, stick to a hardcore sound that’s close-ish in spirit to the heavier parts of Propagandi’s ‘Potemkin City Limits’. If you’re deep into various hardcore sounds, this will become a firm favourite.

‘Sanguine’ (the album) is hard, fast and…brutal. In little over the time it would take to spin a CD single from the 90s, Brutal Youth cram in riff after riff and hook after hook to create a genuine punk masterpiece. While this doesn’t always strive for complete originality, the playing is faultless and the song writing – and especially the chorus hook construction – is first rate. For fans of a classic hardcore style, this filler free album is an essential addition to any discerning collection.