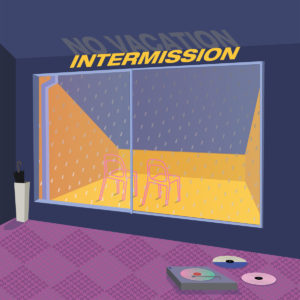 After a couple of false starts, demo recordings, line-up changes and gigs played under different names, this EP finally kick starts a career in fine style for No Vacation, a five piece dream pop collective from San Francisco. The pieces of music captured on ‘Intermission’ – representing their first full trip into professional recording – are things of beauty. These tiny nuggets of other-worldly pop will almost certainly appeal to those who miss Elastic Sleep or perhaps wonder what happened to London indie poppers Honey Moon.

From the ringing guitars and indie pop of ‘Reaper’, representing a softer take on sounds made by the likes of The Pains of Being Pure at Heart, to the New Order-ish basslines of lead single ‘Yam Yam’, every corner of the band’s music is a joy-dropped love letter to the past, while keeping an eye and ear on the future. The way Marisa Saunders places tough basslines against ethereal guitar tinkles throughout the bulk of ‘Yam Yam’ represents the very best for the chosen style. There’s always a feeling that the main melody of this track, in particular, has been a long time in being perfected, as it’s woven in such a way that it could become an endless blanket for a great vocal. Sab Mai’s voice, meanwhile, is just twee enough to suggest a timeless softness always adding to the finely crafted melody, and overall, in dream pop terms, it’s just lovely.

‘You’re Not With Me’ hangs onto the warm bass and combines it with a semi-Hawaiian melody in a couple of places, eventually dropping into a hugely appealing slice of indie pop that hints at a love of Chapterhouse and other 4AD bands. The band are tight and with the piece eventually making a bigger feature of Nat Lee’s broad synth work, it’s a tune that showcases a little bit of greatness from everyone, while the aforementioned ‘Reaper’ impresses with a world of twin guitar jangle laid over a steady rhythm. An EP highlight, this is destined to become a favourite for fans of all harmonious things: in under three minutes, there’s a barrage of six-stringed counter melodies, over which Sab and Marisa lay down various woozy harmony vocals. Holding everything together, drummer James reaches for the hi-hat, getting busier than before…though never too busy. Within these few minutes, No Vacation have conjured up pretty much everything that was cool about dream pop in the early 90s, but also shown how it’s just as appealing and relevant a genre two decades on.

The ‘Intermission’ itself might only be almost a minute’s worth of atmospheric piano work, at least on paper, but it still comes with a stately quality – the kind you might find lurking somewhere on an intro from The Cure’s ‘Disintegration’ or ‘Seventeen Seconds’ albums – meaning that it never feels throwaway. Closing an already excellent EP, ‘Mind Fields’ showcases a great guitar part from Harrison Spencer, a half rhythmic, half jangle affair that allows the second guitar enough space to add bell-like higher registers. With the whole band soon dropping into a piece of solid pop/rock that’s very much focused upon Sab’s pop-styled voice, it’s easy at times to draw comparisons with both The Cardigans and later Lush, which isn’t ever a bad thing. Overall, it’s one of the EP’s most appealing and accessible pieces; finishing with something slightly more upbeat also leaves things on a high. If you’ve enjoyed anything up to this point, you’ll love this and you’ll even find yourself hoping that a follow up recording isn’t too far away.

The five songs – or, indeed, four songs and the titular intermission – on this release are pretty much flawless. Whilst No Vacation might seem like a combination of various obvious influences, in this case, that’s very much a plus point since these guys recycle their chosen sounds with a huge amount of love. Floaty, warm and a completely immersive experience, ‘Intermission’ (the EP) might just snatch a place as one of 2017’s most lovably nostalgic records.