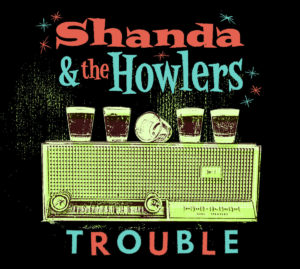 Right from the off, it’s clear that Shanda Cisneros has the perfect voice for the chosen style. She has a natural tone and flair…and more importantly, is in complete control of that voice at all times. However, there’s more to this band and album than Shanda attempting to steal the show. On tracks like ‘Mind Made Up’ the whole band cooks…and it’s great to hear the no-frills production really allowing the slap of Luke Metz’s upright bass cutting through the tougher elements. One of the most loving and traditional reworkings of a retro style, this number represents everything the band holds dear; just listen to the way Trevor Johnson’s heavy slide guitar challenges the snare drum for dominance. One listen is all that’s needed and if you dig revival sounds, this’ll become an instant hit. ‘Trouble’s Out To Play’ goes for something softer musically, blending a Hank Marvin guitar tone (think of the intro to ‘Summer Holiday) with other elements on loan the Motown house band. Rock ‘n’ soul in a perfect marriage, this track is a feelgood workout showing a more subtle approach. A great showcase for both Shanda’s retro vocal and Mich Lapping’s cool sax work, it’s good enough a reason alone to check out this LP.

More sax powers the brilliant ‘Bad Love’, a tune that comes across like a jam between The Mar-Keys and Etta James. A short and sharp burst of the band’s stock sounds, everyone falls into a tight groove in an instant, but if anything makes this stand out it’s the way Shanda uses a powerful voice in an effortless call-and-response with the brass. For all of the good press afforded to the late Sharon Jones, it’s time some of it went elsewhere – and there’s a new sheriff in town.

The rest of the album is of a similarly high quality. ‘Don’t Need Your Love’ shakes things up with a nod to Louis Prima in the way it fuses a gruff vocal with upbeat jazzy grooves. Throughout this number the rhythmic punch of Trevor’s six string stays high in the mix, while the swing-era drum sound comes into its own with jazz fills and heavy toms during an instrumental break. All things considered, this is certainly a highlight. Slowing things down by several notches, the aching soul of ‘Born With a Broken Heart’ is a great vehicle for Shanda, the authentic 50’s production bringing out the natural timbre of her voice on a superb Stax homage, while ‘Keep Telling Me’ is a superb blues shuffle that allows Shanda to bellow at full pelt without becoming overbearing. The contrast between this track and ‘…Broken Heart’ is huge and it’s impressive how she takes each style in her stride with a natural flair. As with so many of this album’s best numbers, there’s always great stuff happening behind the voice; here, a dirty guitar and sax conjure images of bars full of flick-knife wielding greasers. Fine, fine rock ‘n’ roll, indeed.

For something a bit lighter and more fun, ‘Stay Awhile’ fuses funk and soul with a great guitar tone. Traces of Stax and Muscle Shoals studio recordings pump the heart of a timeless machine and – as always – the way the guitar meets the bass without either stepping on musical toes is very cool. With Keith settings up a steady and stately groove, it’s as if creating these grooves is of no effort whatsoever. The reality, of course, is that it’s taken them years to get this good. Elsewhere, ‘Li’l Operator’ brings forth soulful sounds that hint at various Motown acts from ’62 and a touch of Dusty Springfield, ‘You’re Gonna Cry’ is a straight up soul heartbreaker peppered with tasteful slide guitar and ‘She Don’t Want A Man’ sweats the rhythm section like the ultimate soul revue. In perhaps the only criticism that can be levelled at this album, perhaps the horns should have been much louder in the mix, but that doesn’t stop this being a first rate tune.

With great performances and a sympthetic old style production value that makes ‘Trouble’ sound like a period piece, no amount of words can actually replace the experience of hearing this record first hand. So, turn down the lights, pour yourself a shot of your favourite poison and crank the volume knob. With eleven tracks o’ retro whack, this album is a filler free, good time guaranteed.

One thought on “SHANDA & THE HOWLERS – Trouble”