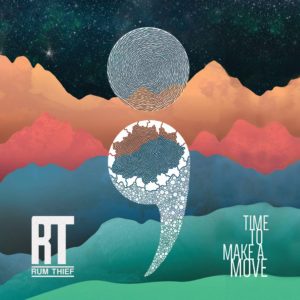 In the summer of 2015, singer-songwriter Jot Green (aka Rum Thief) released ‘Reach For The Weather Man‘, an EP of hard jangling tunes coupled with social commentary and an unavoidable sense of Englishness. Like a northern Frank Turner, an underground Alex Turner or perhaps a Mike Skinner with actual tunes and talent, he showed a strong ability to couple grass roots messages with a gruff but fairly timeless indie-rock backdrop. A fair while passed and nothing more was heard. Had the Rum Thief been swallowed up by his day job, or even run out of things to tell the world? It would seem so.

…And then, sometime after 2017 had found its feet – seasonally, if not socially or politically – Green poked his head from below, reappearing with new material. Given the wait since ‘Weather Man’, it was hoped that a full album would emerge but, sadly, it’s just four songs that make up ‘Time To Make a Move’. Two of those four really hit, though, and could easily be better than any previous Rum Thief work…and that’s what really counts here.

Opining with ‘Spittin’ Daggers’ – one of the toughest Rum Thief tunes to date – the EP certainly gets off to a great start. The riffs come hard and sharp, channelling the faster parts of ‘Humbug’ era Arctic Monkeys, as the guitars and bass collide throughout a hard-edged verse. The production values ensure the guitars retain some harshness and then Green makes his entrance: “These four walls have a story to tell…” he begins in a typically pointed fashion, on a tune that appears to question his place in the world, driving the verse towards a suitably crashy chorus. Well structured and well played, it’s as if everything leads up to the carefree and careening sounds of the featured solo, but then everything drops away to reveal a pleasing selection of muted chords before smashing the listener with the rousing hook one last time. Bringing more melody, the title cut experiments with more muted chords throughout and a thoroughly entertaining bass line; all the while Jot throws out lines loaded with social comment almost constantly. He’s in better voice than ever, but never loses his natural and gruff stance on anything. By the time a drum rattle and fuzzed guitar step up and bid this tune goodbye, there’s a strong urge to stop right there and hit the repeat button before moving on.

‘Toilet Door’ adds some acoustic chops to the mix by way of a solid rhythm guitar, but soon moves further into expected ringing electric territory, first via heavy reverbed sounds on a steady verse, then a driving and slightly distorted feel on the chorus. The high point of the arrangement comes courtesy of a confident lead, sounding very much like something on loan from The Gaslight Anthem. Green, meanwhile, links the styles with a naturalistic vocal in a performance that comes with maximum volume and minimum fussiness. Overall, this track passes a reasonably enjoyable few minutes, but often feels like it ought to be better than it is. It’s this release’s weakest track by some distance but, that said, the brilliant lead guitar riff makes it worth revisiting. ‘What Do You Know’ changes the mood a little once more, fusing the kind of British garage rock – as perfected on the Arctic Monkeys debut – with an unexpected reggae-ish rhythm at first, before branching out into some louder indie rock to give things a boost. Overall, although the lyrics and vocals often play second fiddle to a very well crafted bassline, a few plays is all that’s needed before Green’s ability with a chorus becomes more obvious. He knows the importance of such things and since this number draws to a big finish with the most infectious, repetitious hook, the EP shows off another highlight. In terms of indie rock, ‘What Do You Know’ could well be one of Rum Thief’s best tunes to date.

After a two year absence, it perhaps isn’t wrong to expect more from Rum Thief than you essentially get here but, on the other hand, this is an exercise in quality over quantity and it is good to have he/them back. What this EP does, it does well enough for that quick musical fix and while it mightn’t always be as sharp as it’s predecessor, it’s still a recommended listen. Some great riffs coupled with the brevity of the songs means the EP hits relatively fast and hard before making an unapologetic exit, suggesting – very much in a hit ‘n’ run style – Rum Thief will be back. When that might be, of course, is anyone’s guess.