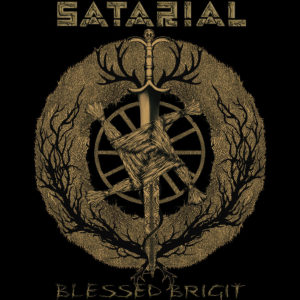 ‘Manifest of Paganism’ opens with a crashing chord that’s rooted in the old school, before revealing a world of soaring sounds and drones set against a chanting voice and rattling noises. The disc’s production values give plenty of crunch…and while the dominant riff is slow, intense and unchanging, continues to impress. Various voices try and escape the oppressive noise and fail, while synths further bulk out the sound with brassy noise. This unholy fusion of black and battle metal is intense, to say the very least…and that’s even before the lead voice makes an entrance. When that time comes, a man growls and gabbles like a demonic goblin, while each line of his near impenetrable noise appears to punctuated by a repeated sample of a woman crying. Okay, this is interesting: it should be somewhere in the realms of unlistenable, yet somehow – probably thanks to a superb riff and tough production – Satarial continue to draw in the unsuspecting listener. As these six minutes progress, nothing subsides and absolutely nothing lightens. The riff continues to impress while that voice challenges, but remains an integral part of this musical dystopia. Delving into a brief instrumental interlude, a crushing industrial edge forces out the blacker tendencies – and better still, samples of choirs add a quirk that pretty much nobody would expect. Well, nobody approaching the band for the first time…

Can Satarial follow such an epic, kitchen sink production with similarly interesting material? The answer is a resounding yes. The other five tracks – totalling another (incredibly challenging) thirty five minutes go a long way to making this release one of the most interesting of its ilk, even if the results aren’t a particularly accessible listen. ‘Horned God’ makes a much bigger feature of the folk metal elements, centring around a noodling keyboard riff that resembles a centuries’ old jig, while a second set of keys adds string sounds. Over this, their vocalist grumbles an unsettling incantation – all throat and no gentility – and intermittently, everything is linked by sheets of black metal riffing. The push and pull really helps the tune pass with interest, but it’s when introducing a female voice midway the track really takes off. There are more dalliances with melody, as her spooky wails add atmosphere. For most bands, all of this wedged into one track would be enough, but Satarial go that one step further and include an off kilter riff as if used as bizarre musical glue, teasing with extreme prog-metal influences. In terms of folk metal, you’ll rarely have heard stuff as heavy as this (and it makes more sense of their somewhat embarrassing, ritualistic live show, for sure. It’s a shame they feel the need to sully such interesting musical ideas with pagan fantasies involving challices, various unadorned tits and the like, to be honest. Yup – all of that has the potential to overshadow the music…and for all the wrong reasons, unfortunately).

As if to take a breather, ‘Chaos’ is – ironically – less chaotic, presenting a world of progressive death metal riffs tempered by a wobbly keyboard sound (sounding as if on loan from the BBC Radiophonic Workshop). The synthesised strings set against thrashing riffs more than sustains the bulk of the music, especially given the more old-school approach throughout. Although more basic, there’s still time enough for a blast of folk and more samples of torment. Overall, it’s a great insight into the band’s bizarre fantasy world – and both the length and (relatively) stripped back arrangement make it a slightly more penetrable one, at that. Moving into ‘Yarns of Fate’, we’re in a world of bombastic battle metal, with scowling black metal vocals for that all important intensity. A tune where the riff should be everything, surprisingly it’s the uncharacteristic mid pace and parping keys leave the most indelible impression. It’s a rare example of Satarial sounding less original on the whole, but the riffs are still impeccably approached.

The final pairing of tracks pushes us back into a world of unsettling darkness. ‘Formation of the Moon’ spends several minutes churning out a slow and menacing riff that could be on loan from various 90s bands, coupled with more torturous voices and samples, before launching headlong into a purist black metal sound. The riffs, in turn, become more pneumatic; the sharper edges are displayed for all, before more folk metal jiggery turns everything on it’s head. With three distinctly different styles at play, most of the more prominent extreme metal bases are more than covered, but there’s still time for a pirate infused melody to top it all off. With some really first rate riffs, this number might have worked better with more of an instrumental bias, but – even with a few difficult voices to contend with – it’s still one of the album’s strongest numbers. Closing with the epic title track – a workout just shy of ten minutes – Satarial throw all of their folk metal ideas into the musical pot. An intro makes good use of drones and demonic voices, dragging a bass heavy sound well into two minutes before tribal drumming builds tension and keys bring darkest hints of something channeling both goth and folk metal to round out the sound. At this point, you realise this isn’t an extended intro at all, but a slow and repetitive musical ritual. The female voices do their utmost to sound like a satanic Clannad, while the frontman continues to make deep throaty sounds, almost like a human didgeridoo. Without fully understanding the bands motives or the incantations – or indeed, even wanting to – it’s all about the force behind the drums and the idea that this can sustain a full ten minutes. It’s either a brilliantly atmospheric end to the album or a complete musical anti-climax (dependent on your viewpoint), but there’s little denying that it comes with a complete lack of compromise.

In a world where so much black/extreme metal seems to follow a very predictable pattern, it’s somewhat pleasing to encounter a band truly open to experimentation. In their world of extreme riffs and sledgehammer sounds, Satarial often temper things with layers of the unexpected. It’s intense…and then some. Make no mistake, ‘Blessed Brigit’ is no easy listen, but in its desires to push forth the boundaries of black and death metal deserves an audience.