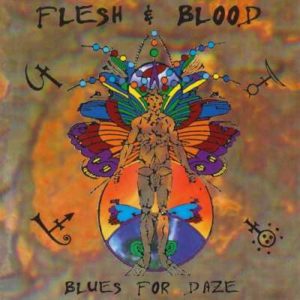 To help them bring the new band to life, Al and Chuck enlisted a couple of musicians who also had a notable background within the melodic rock field. Songwriter/keyboard player Mark Mangold had previously found success with Touch (the first band to play at the very first Donington Monsters of Rock Festival in 1980) and gained good press later on with AORsters Drive, She Said, while vocalist Danny Vaughn had tasted success as the frontman with Waysted and Tyketto. Not that either of these musicians’ combined experience within AOR had much of an impact on the resulting album, however, since the main core of Flesh & Blood’s sound was a continuation of the blues-rock stylings with which Pitrelli and Bonfante had experimented previously.

Flesh & Blood’s sole release ‘Blues For Daze’ was one of the last releases to appear on the UK melodic rock specialist label Now & Then Records, one of their first after merging with European melodic rock giants Frontiers. According to an undisclosed source at the time of the album’s original release, they just “put it out to annoy the more purist AOR fans”. That was likely said with tongue firmly in cheek, although – much like its forerunner Place Called Rage – this isn’t always as distant from the label’s usual output as it initially seems. Yes, there’s a bluesy vibe and some southern grooves; yes, that’s more in keeping with the likes of The Black Crowes than Tyketto, but with Flesh & Blood – much like those early Whitesnake offerings – the blues elements are delivered with a hefty slab of rock in tow, and quite frankly those rock elements are decidedly very melodic. Perhaps the biggest difference between this and the label’s other offerings is the lack of harmony vocals in a few places and a distinct lack of shiny synths – this is a trip down memory lane to 1972 rather than ’82 – and in that respect, no, the more purist listener probably wouldn’t care for this very much. If so, maybe they should get their ears cleaned and at least try and be more open minded, since there’s some great material here.

Two songs will be instantly familiar to those who own the Place Called Rage disc, since ‘I Know Where You Been’ and the excellent ‘Jenny Doesn’t Live Here Anymore’ get welcome re-recordings from this follow up project, both making excellent use of Vaughn’s superior vocal talents. Although the arrangement for ‘I Know…’ remains largely unchanged, the recording budget is clearly superior to that of its predecessor, with more focus on vocals. Also, a slightly slower pace allows a gritty edge to the vocal. Digging deeper, Mangold’s organ fills and bar-room piano moments are also better than those on the prior recording. Before pulling across the finish line with a final outing for what was always a memorable chorus, things drop down for atmospheric effect and with Mangold’s organ providing a base for the vocal to stretch out a little, a great amendment. In the hands of this band, ‘I Know Where You Been’ shifts from being a decent rocker to something worthy of The Black Crowes. ‘Jenny’ was great first time out, but second time around, it’s an album highlight; acoustic guitars pave the way for the melody driven rock ballad, somehow sounding more like Poison than it did previously… The arrangement may be clichéd, but the vocals on show are this album’s best, while Pitrelli’s guitar work – a touch more restrained, as such a tune dictates – sounds like the work of a true pro.

The rest of Flesh & Blood’s material follows suit stylistically – each song pushing the more emotive side of Vaughn’s voice, while still allowing Pitrelli plenty of room with regard to guitar chops. The full-time presence of the Mark Mangold on keys gives F&B an extra dimension previously not fully explored in the more hard rock driven Place Called Rage, and he really comes alive during ‘Shake Ya Tail Feather’, as his fills and swirls provide perfect accompaniment to Mitch Destefano’s funky bass. The soulful mix of funk, blues and rock builds to a solid instrumental break which showcases a mean harmonica – capturing the retro grooves of this short-lived band almost perfectly. Things could have perhaps been improved with a big organ solo, but being thankful for what we have, each member of the band plays their arse off here and the results are suitably enjoyable. The balladry of ‘Bed of Roses’ pulls things further into AOR territory with it’s slightly more emotive vocal and soaring guitar notes, but occasional use of slide and (another) prominent Hammond organ ensures there’s still a very retro bent throughout. In terms of chorus, simplicity is king, but Vaughn’s strong delivery is perfectly suited to the material in hand.

A second attempt at a ballad, the piano driven ‘Man Enough’ may not be quite as top drawer as ‘Jenny’, but a great slide guitar part, a nod to country rock and a strong vocal help the song to stand on its own merits. Of particular interest is the lead guitar break; other more egotistic musicians would have, perhaps, insisted on a second take to fix a couple of bum notes, but Pitrelli is happy to let these slide, understanding it’s the more naturalistic elements of Flesh & Blood’s sound which often makes the tunes so enjoyable. Capturing the band at their most bluesy, ‘Voodoo Moon’ is a stripped back acoustic stomp, where Vaughn gets to pitch the ragged end of his voice against noodling acoustic guitars and a harmonica. Whisky soaked and back to basics, while a world away from Tyketto, those who love Danny Vaughn will love this, while those who want something in the more “rock tradition” are likely to reach for the skip button. ‘Sweet Sister Rose’ pulls the most enjoyable moments from all the other tunes and mixes them up, creating a monster: Vaughn is brilliantly bluesy and wholly confident, Mangold tinkles the piano in an Ian McLagan style, while Pitrelli and the rhythm section inject a little rock. Here, the attempts at keeping things rootsy very much succeed, especially as a choir is employed to fill vocal duties in a fashion that’s very reminiscent of The Black Crowes’ ‘Sting Me’. If Flesh & Blood’s groove-laden blues rock has pulled you in thus far, then this tune is guaranteed to thrill, but if you’ve not quite grasped the mood and are still hankering for something more in line with Tyketto or Drive, She Said, you may as well give up hope…

Unsurprisingly – like almost everything else released by Now & Then Records – the great press the album received didn’t really equate to actual sales. As always, though, a lack of sales doesn’t necessary mean a lack of talent. There are some fantastic numbers on the Flesh & Blood album and Danny Vaughn is in particularly fine voice on most tracks. Although it’s not an album which turns up in “the real world” too often – or indeed, ever – the internet has made it much easier to find. If you’ve never heard it, try and pick it up sometime. If, for whatever reason, you discovered Danny Vaughn later than most, or you’re one of the many who rightly enjoy Mark Mangold’s songwriting chops, you probably won’t be disappointed with what you hear here – bluesy slant or otherwise.

[Following Flesh & Blood’s break-up, Al Pitrelli resumed work with Savatage, Danny Vaughn formed his own eponymously named band, while Mark Mangold released a one-off AOR disc with the band Mystic Healer and a solo album ‘Mirror Image’. The Mangold discs, in particular, are worth seeking out and to tie them in with this project even further, both feature Chuck Bonfante].