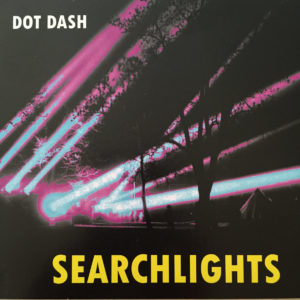 ‘Searchlights’ is Dot Dash‘s fifth album in as many years. It’s hardly surprising the Washington-based garage rockers have been so prolific when you consider that this – their contribution to 2016 – was recorded in just two days. These fifteen songs musically hark back to the days of the UK’s burgeoning post-punk scene and the US’s college rock underground – and for fans of The Jam, The Vapors and middle period Replacements, this album should rattle a few memories and get the adrenaline pumping.

‘Dumb Entertainment’ does exactly what it says on the tin, with the band delivering a raging jangle that sounds like an unholy hybrid of The Replacements and Nine Below Zero, as a raw garage rock aesthetic kicks an old rhythm and blues bar band squarely up the arse. Production wise, it’s rough and ready which brings out the best in a raucous guitar solo and bass sound, if not the vocal. ‘Holly Garland’ is even better, working a familiar jangle against an angular lead guitar and enthusiastic voice. The general mood – although garage based – comes across like a musical ray of sunshine, the power pop melodies and sweeping basslines wholly evocative of the legendary Only Ones. In and out in exactly two minutes, there’s no padding, just the solid bones of a great alt-rocker – a track that stands as one of Dot Dash’s best. Shifting the mood somewhat and moving beyond the band’s preferred two minute bursts, the near six minute ‘Fading Out’ borrows influence from late 80s UK indie and shoegaze scenes – complete with more wistful vocal – and sets up a steady beat, over which the track becomes home to various lead guitar freakouts. There’s a great song in here, too, with one of those hook lines that doesn’t seem so obvious at first but catches you unaware somewhere down the line. Although it occasionally feels more like an extended jam than a song, it’s one of the album’s highlights, showing off Steve Hansgen’s guitar sounds admirably.

‘10,000 Days’ blends Husker Du sheet guitar sounds with a superb bassline from the outset, showing Dot Dash’s constant push and pull between old punk values and buzzing power pop friendliness. The higher register vocal on the chorus feels like a misstep at first, but there’s enough great music within this three minute nugget to forgive that; hearing Hunter Bennett’s busy basslines at the fore give this raw number a surprising complexity and proves that these guys so often have a keen ear for hooks and melodies, even if their production style masks that somewhat. Taking a step down, ‘Wishing Star’ is a wistful guitar pop affair that comes with a Big Star love that’s unavoidable before ‘The Infinite’ – another essential Dot Dash nugget – returns the quartet to their familiar turf of cranking out music that sounds like the ‘Mats jamming out Pezband and Only Ones classics, topped by a breathy and urgent vocal as frontman Terry Banks delivers one of the record’s best performances.

Blending late 60s garage pop with a 90s sensitivity, ‘Summer Light’ brings more faultless bass work and a melodic guitar solo, making Dot Dash sound like a tougher cousin of a forgotten Paisley Underground band, before ‘Dance On Broken Glass’ delivers a superb tune topped with thoughtful guitar work before a quick nod to ‘All Mod Cons’ era Jam teases in a bridge section. The Jam influence really comes out on the title track, though; not just through a bass part that would make Bruce Foxton very proud, but also in the way the between verse riffing drops into a very neo-mod breakdown. In fact, musically speaking, for the style, this track is perfection – it has melodic edges, but never loses sight of it’s post-punk energetic streak, often showing Dot Dash’s general enthusiasm for the second British Invasion with class. ‘Crumbs’, meanwhile, works some cool choppy guitar lines and a sharp riff, contrasted with a sense of the melodic, all stemming from ‘While You Were Out’ era Soul Asylum and an influence from The Real Kids. Throw in a self-questioning lyric or two (“sooner or later every caped crusader finds a villain he can’t beat” / “don’t follow the crowd to end up alone”) and you have a real winner. Toughening up, ‘Daddy Long Legs’ – a track used to promote the album before release – evokes the distorted proto-punk of New York Dolls, complete with sneering vocal. Musically, it starts out with a huge swagger and the guitar riff cranked, but doesn’t let up, finding time along the way for an ugly and angular lead guitar break from the Greg Ginn school of melodies and a relentless harmonica solo. Just as ‘Holly Garland’ showed off the roots of a tight power pop band (of an eighties persuasion), this shows Dot Dash are just as adept at punkier styles.

If you liked anything from Dot Dash before, even with more musical variety at their desposal, there’s a good chance you’ll love ‘Searchlights’. As before, these guys know their way around a good chorus and they bash through tunes in their chosen style with more energy and bravado than ever. Provided you’re happy enough to overlook the almost non-existent production values, with fifteen tracks and surprisingly little filler, this is an album with plenty to recommend it.