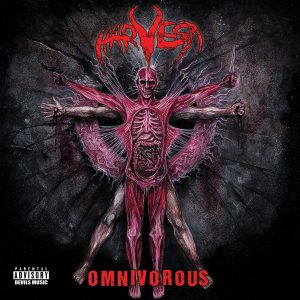 There are literally millions of thrash and death metal bands out there on the underground scene. Some of them are as rough as hell, but once in a while, a band will come along with the possibility of knocking the listener sideways. Despite a reasonably low budget spent on their debut 2016 release ‘Omnivorous’, Panama’s Harvest are one such band. Pretty quickly, it’s clear that the bulk of their sound owes so much to pre-‘Chaos AD’ era Sepultura…right down to a many of the vocal styles. It must be something in those Central and Southern American waters.

Although marketed as an EP, the seven track release clocks in at almost half an hour, so you get a great insight into the band, their talents…and their sledgehammer obvious influences. First, though, an intro ‘Wicked Beauty’ teases with plinking piano sounds, demonic breathing and the sounds of things occasionally being broken. We’re deep in horror film territory, but this only makes the opening chords of the first proper track more striking as the dual guitars of Ricky Sinner and Gilbert Wolf crank out a couple of hefty chords. Although slightly muddy in sound, their intent is clear. Without further ado, a bigger riff pushes everything forward in the manner of one of Slayer’s slow and spooky outings, with the dirtiness from pre-‘Arise’ Sepultura also more than evident. Dropping into a mid paced staccato groove, the tune then makes room for an almost spoken vocal, as frontman Ernesto Gomez vents his anger in a style that almost makes him sound – rather unexpectedly – like a Latin American counterpart to Phil Lynott‘s preacher from ‘War of the Worlds’. We’ve already encountered two or three musical moods within a short space of time, but from here on in, ‘Lavinia’ becomes totally assured, mixing slow and very heavy grooves with bursts of thrash and the expected screaming guitar solo somewhere en route. It’s great metal, no mistake.

The darkest aspects the intro make a brief return at the beginning of ‘Medusoide’, a track that’s easily one of Harvest’s best. Throughout this track, drummer Jocelyn Amado really goes to town, shifting the pace between hard and fast thrashing pneumatics, slower groove metal influenced passages and the odd melodic death interjection. It makes for constantly thrilling listing while Ernesto growls and the resultant heavy riffs are a match for anything Sepultura released in their formative years. By the time the band reach the track’s climax, the trading of solos pitched against a heavy chugging downstroke really begs the volume to be cranked. Shorter and sharper, ‘King of Nothing’ shifts the focus from thrash to groove metal in the intro, teasing with a riff that would make Dimebag smile, before the whole band lurches into the one of the fastest musical passages on this release. For the next few bars, Jocelyn unleashes a double bass pedal fury and the riffs hit upon an assault worthy of Slayer and Kreator. There’s still more, of course…and this time, the band break up the intense speed with more groove metal and a touch of very deep heaviness. It seems a little unvaried compared to a couple of tracks, but shows further that Harvest are a hundred percent committed to classic metal styles.

‘Hellraiser’ kicks off with a sample from the movie of the same name and then hits the listener very hard with some impeccably played thrash that owes so much more to Sepultura than anything heard previously, before wandering into some very unexpected instrumental work with the bass at the forefront. If ‘King of Nothing’ played solely to type, then this really shows the breadth of Harvest’s unquestionable talents, before the brutal title track increases the pace and volume to pay homage to a harder thrash sound, peppered with the hardcore crossover sound of the 80s. If a couple of the other numbers are squarely from the Sepultura handbook, this shows an equal love for ‘Blunt Force Trauma’ era Cavalera Conspiracy. Even here, though, the band occasionally hint at their geographical roots by chucking in a couple of almost traditional harmonies – the kind you’d expect to find on an Ill Nino elpee – and by the track’s end, with a scaling back of the speed, they finish with some great, near timeless riffery. If you’ve stuck with them so far, there’s little doubt you’ll love this.

With yet more to give, ‘Letchworth Hell’ brings a genuine darkness with some spoken words and subtly underscored bass work (courtesy of Friolo Rodriguez) and a haunting, buzzing guitar sound. Naturally, this is followed by a barrage of riffs that echo thrash’s glorious past – nods to ‘Seasons’ era Slayer, ‘Ride The Lightning’ era Metallica and a huge love of Sepultura’s ‘Beneath The Remains’ are all present to varying degrees – while still retaining a strong musical relevance. It’s during the slower passages that Harvest really come alive, though, with Wolf and Sinner going head to head on some furious downstrokes. This is superb stuff, indeed; pretty much guaranteed to please fans of the style.

Throughout ‘Omnivorous’s heavy and intense twenty seven minutes, Harvest may borrow heavily from their influences, but it doesn’t ever stop the recording having a great musical impact. If you hanker after that very distinctive sound perfected by Sepultura in 1989, honestly, do not hesitate to seek this out…it’s got all the makings of an underground classic.