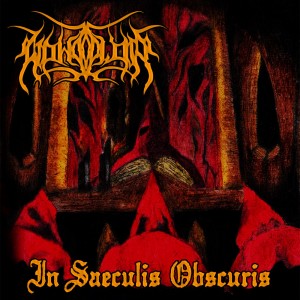 From Belarus comes Golohor, a death metal band that’s so underground that at the time of release for their 2016 EP, the only mention of them on the internet comes from the web page of the Russian record label distributing their CD/download. It’s almost as if the band members never previously existed; there’s no bio, no photos, no social media presence. That’s odd; even guys with black and white facepaint and pseudonyms usually have some kind of online presence, but for Golohor, there’s this EP…and that’s it.

With no back history, no context or insights into the making of this EP – the rather catchily titled ‘In Saeculis Obscuris’ – it’s down to the music to speak for itself. Thankfully, for this death metal troupe, their music speaks volumes. Unlike some extreme metal releases, this has been afforded a terrific production job. The bottom end comes across with the kind of grumble that can install fear into the hearts of many; the guitar sounds are sharp and equally fierce, while the drums carry a huge weight in their expected three-legged, pneumatic frenzy. In short, from a musical perspective, this pretty much does everything a half-decent meat and potatoes death metal disc should. Except it’s rather better than that. The songs have two distinct vocal styles: one with a grunting, obtuse anger – the sort of thing that’s pretty much a given here – and another, thinner, spookier rasp, lending an unexpected black metal colourant, and this all works out rather smartly during the opener ‘Art of Infernal Power’. Hearing the two voices simultaneously gives the performance a very full-bodied sound. On it’s own, the death voice is one of the deepest you’ll hear; interspersed with the black voice, the track has a cool call-and-response element that really gives the track a lift. Elsewhere, with the chugging riffs derailed sporadically by pneumatics, the band’s hybrid of classic death metal and other extremities should appeal to – but not exclusively – fans of ‘Symphonies of Sickness’ era Carcass.

If that sort of thing appeals, then ‘Naberius Daemon’ then might just impress even more. There’s still the dual vocal thing at the heart of everything, but it’s potentially a more rounded musical performance, with some absolutely superb drumming. There are times the drums are so fast, you’d suspect the riffs were the after effects of triggers, but the fills are too impressive for any trickery to have been used. The clanging cymbal that pierces the fastest moments cuts through the noise with pin-sharp clarity, while the marriage of drums and guitars drives a classic slab of death. With everything at a lightning blur of a pace, the chances of everything just becoming a huge muddy mess are high, but the guitar riffs are played with an impeccable style, even daring to rise for more of a lead at one point, so in terms of the style in hand, everything works out very nicely. Is it possible to use the word nice? Maybe not, but all of this combined with a slower, thrash based intro lends itself to really satisfying performance.

The blurry noise eventually stakes its claim, however, as ‘Obscurus Sacramentum’ goes for broke in both the speed and volume department at first, meaning that – at least to begin with – everything has gone just that little too far into the bad side of extreme. However, it’s worth sticking it out, as the mid point brings a really old style, lightning fast screaming guitar solo and a couple of time signatures borrowed from a more progressive style of death, meaning that some nimble bass runs can be heard filling a few gaps. This alone seems to more than prove there are some good players involved in the creation of this release. ‘Symbols of Blasphemy’, meanwhile, is far more traditional, adding an increased usage of clanging ride cymbal and almost “vibrating wrist” approach to the snare, leading to far more focus on shredding death riffs. The bottom end continues to grumble and the band’s all round commitment to the genre is more than clear, but aside from a brief lead guitar break, there’s not much else going on of huge interest. Even the dual voices are more of the empty, throaty style, making this the weakest track overall.

So, whomever they may be, Golohor are sharp players, sharp enough to take on the best in a death metal battle of the bands type frenzy; this EP has more than enough to reel in even the more casual death/extreme fan. Credit where due, while sticking to a familiar path, this is a solid companion to the millions of similar releases out there. There are so many, it could just get lost, but if you’ve read this, set aside a quarter of an hour and make sure their efforts aren’t in vain.