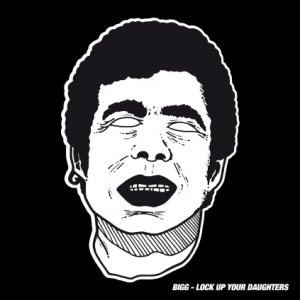 Risen from the ashes of Beat Magnets – a band who played at festivals and scored support slots with The Wombats – comes Bigg, a loud, guitar driven creation from Reading. Aside from influence from various UK indie bands, their debut EP brings a surprising amount of crunch and sometimes a heaviness that might just find them wandering into the worlds of other listeners previously not reached by Beat Magnets. Their music, although often accessible, sometimes has the same kind of hard and sulking attitude that’s present in their publicity photos for the release, where at least one member has decided on a facial expression that suggests someone has popped his favourite balloon.

Things waste no time in getting started either. ‘How Do You Sleep’ is not a cover of the unnecessarily bitter John Lennon number where the ex-Beatle attacks McCartney’s solo work, but a self-penned and excessively punchy workout where eventual shouting vocals collide with fuzzy, dirty guitars. There’s often a strong, almost funky backline too, with a superb drum sound, heavy on the snare; a funk slant that the guitars pick up in no time. The verses are almost a throwback to early 90s funk metal, but a crushing chorus brings with it a riff that’s firmly more of the distorted stoner vibe. Over the louder parts of the track, a once quasi-rap vocal style switches to a throaty shout and although this occasionally has the air of two musical ideas sewn together, it works…and If this in any way grabs you, the following tracks are far more impressive.

The grimy sound of the band’s chosen riffs comes farther into force during ‘Man Overboard’. With more room for manoeuvre, the guitars chug and swagger, the drums lay down a measured groove and the quasi-funk vocals make a brief return. This alone sets the tone for potentially better things, but it’s upon reaching the chorus things really take hold. At this point, the vocals expand to a surprisingly melodic sound, the guitars find a big alternative rock crunch and the combination of defiant heaviness and melody gives more of a live sound to the recording. It cannot be played quietly! ‘Nobody’ really cranks the rawk elements of Bigg, kicking off with a guitar riff that’s huge, simple and would feel rather seventies, if not for the slightly off-kilter note thrown into the middle for effect. The introduction of the drums typically leads to a huge increase in volume from everyone. Aiming to crush everything from here on in, there’s a huge influence from Royal Blood and Queens of the Stone Age, and by eventually dropping into a quieter verse, it ensures it’s a track that isn’t without a cerebral slant. A dual voiced, more complex vocal fills a lot of space with the main hook being more than memorable from first listen, but it’s the big(g), almost stodgy riff that wins out.

For lovers of the loudest end of the indie rock scale, these three tracks may well appeal. They’re well written and played with more force than the initial bars of the opening track would ever have you believe. While not necessarily big on originality, in the sound department, Bigg are big on being big…and with each track more impressive than the preceding one, that alone is enough to carry off this first effort with relative ease.